Share All sharing options for: The Candidates: Les Miles

This be the nature of coaching searches; a guy who was completely implausible three days ago now appears to be a candidate, and a leading one at that.  Rewind to yesterday when this Michigan Themed jet was spotted flying into Baton Rouge mere miles from the LSU campus.  Yes, Les Miles was in Dallas for the Cotton Bowl.  No, this will not stop us from flipping right the hell out.  I think Sports by Brooks had the original story, apologies if I'm miscrediting... 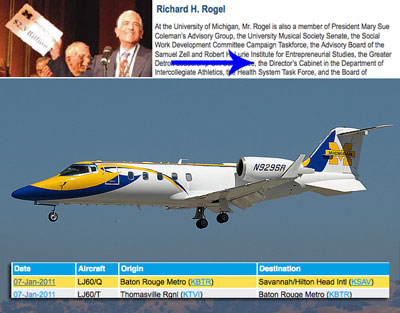 Anyways, the jet doesn't actually belong to the University, but it has been used by the athletic department for various functions in the past.  The legitimacy of Miles' candidacy has been detailed over at mgoblog, so I won't do it again here.  Suffice to say that the LSU corner of the internets has been exploding with "he gone" type talk while current LSU players say they've been explicitly told that he's staying.  Also, awesomely mysterious Kelvin Grady tweet:

I have a good feeling about this weekend.... "in DB we trust" #goblue
28 minutes ago via Twitter for iPad

So the latest coach to blow up in speculation is Les  Miles, and Kelvin Grady tweets this...probably enough to do a profile on Les, especially given that Patterson just signed a contract extension and remains "not contacted" which...dude, why not?  Tangentially related on that tweet: it's clear that David Brandon has reassured the vast majority of current Michigan players throughout this whole process, which is nice to see.  Hopefully the new guy won't have to deal with a locker room divided; one of the many downfalls of the Rodriguez era.

From:  Born in Harrison Township, MI, Grew up in Elryia, OH

Leslie Edwin Miles played football, baseball, and wrestling (do you play wrestling?) at Elyria High School, eventually attending the University of Michigan and lettering under coach Bo Schembechler during the 1974-75 seasons.  Wait for it...there he is!

Les returned to Michigan as an assistant coach under Bo in 1980, and stayed until '82 when he left for a position at Colorado.  He came back to Michigan in 1987 where he coached for 8 seasons until Gary Moeller was let go, at which point he went to be offensive coordinator at Oklahoma State.  He bounced to the NFL shortly thereafter coaching tight ends for the Dallas Cowboys.  In 2001 he came back to Oklahoma State as head coach, and the rest is history.  The resume:

Ok, so we've got a bonafide, certified, southern-fried Michigan man here so you can check that right off your list.  As a head coach, Les Miles is 90-38 with a 6-3 bowl record.  He won the National Title in 2007 while at LSU, besting Ohio State.  Throughout his tenure at LSU, he's been known to have as big of clock management issues as he's had testicular fortitude.  He also, somehow, just seems to win football games that he really shouldn't win.  That last statement is so, so subjective, but it's just what I notice when I watch his teams.  It's like watching a half derailed train filled with TNT, strippers, and bootleg DVD's roll down the track; it's dangerous, tawdry, and probably illegal, but damn is it fun.

Les Miles' teams have consistently shown to be competent on both sides of the ball while competing in the...sigh...most competitive conference in the land.  From his early head coaching days at Oklahoma State to his recent tenure at LSU, he has shown an ability to recruit, field, and coach teams that might not do anything spectacular, but do everything pretty darn good.  Taking a look at total defense for his tenure as a head coach:

This year, Les has his defense humming along at 12th nationally at 307.2 yards allowed per game.  The argument against Les, at least statistically, is that he took over an LSU team with Nick Saban's players, and sure enough had a great run.  However, though Saban may have recruited some of his upper-classmen from his 2007 title run, Les still had to coach them.  A concern is what happens when he takes a defense that is one of the worst nationally.  His defenses at Ok St. were pretty bad, and remained in the realm of pretty bad throughout his tenure.  His defenses at LSU were pretty good (bordering on great) and he's kept them in the realm of pretty good.  There just isn't that "improvement arc" that I'd ideally like to see here.

Inconsistently average.  This year, Les has the 86th ranked offense at 343.2 yards per game.  Les runs mostly a pro-style offense, which means that the Denard Retention program will likely take a hit.  Remember dual-threat quarterback Russell Shepard who was briefly a Michigan recruit before going to LSU?  Yeah, he's a wide-out now, despite being the #3 athlete and #1 dual-threat quarterback in his class.  A transition to Miles' offense will likely be painful.

What baffles me about Les Miles is that his success as a coach seems to fly in the face of his statistics as a coach.  I know it's a terribly Michigan Fan thing to do when you point to a chart and say "see?  SEE?" but his offenses and defenses throughout his career point pretty squarely to mediocre bordering on above average. Yet, he must be doing something right because the guy just seems to win football games.  His track record at LSU is solid in the W/L column.

His on-the-field antics(?) of eating grass and generally screwing up time-related issues is going to be a problem.  When I said that charts are a "terribly Michigan fan" thing to do, I meant it.  LSU fans, god bless them, seem happy to just take the W and go "whooooo-weeeeee! was that close!"  I seriously wish the Michigan fan-base were more like this.  Instead, Miles will find every decision scrutinized, and if he pulls some of the time-out fiasco's that he pulled this year he'll be in hot water even if he does manage to still win the game.

Finally, there is the age issue.  Does a 57 year old coach have enough tread on the tire's to undertake what has become a rebuilding project at Michigan?  This is something that Brandon and Miles will have to hash out if he is indeed a serious candidate.  I can't speak on the subject because I just don't know, but it is a red flag.

If Miles is indeed the guy, then it's going to probably be a pretty fun ride.  The guy manages to win football games, even if he does make them a bit more entertaining than they have to be.  As I said, I'm not worried about the oversigning issues because it will be made clear that they won't happen at Michigan.  As for a guy who will "unite the fanbase" well, he probably will.  Three years ago we were all pretty excited about the possibility of Miles, and I doubt that excitement has waned within the majority of the non-internet dwelling Michigan fans.  The Internet dwellers will have significantly more reservations because of posts like this.

For the record, and I know I will be disagreed with, I would prefer Hoke over Miles.  I think Hoke brings more energy, willingness (and ability) to rebuild, and presents a more viable long term solution.  Miles' career has seen him take teams that were pretty good, and continue to make them pretty good.  If it takes him 3 years to rebuild Michigan then he's 60 and probably getting into that "Lloyd Carr Twilight" period.  Believe it or not, I kind of think Hoke's ceiling is higher than Miles'.  I can't believe I just typed that.