Now that I've introduced myself, it's time to get down to business. I've dabbled in advanced statistics before, mostly with KJ's stuff at The Only Colors before his retirement, but now I'm going to try to add something of my own to the table.

If you're unfamiliar with the Four Factors -- effective field goal percentage (eFG%), turnover percentage (TO%), offensive rebounding percentage (OR%), and free throw rate (FTRate) -- you can go to KenPom's explanation page here. Basically, tempo free basketball makes some obvious assertions; that basketball games are won and lost because of how well teams maximize the possessions they have and how well they generate extra possessions (while keeping their opponents from doing so). How well a team shoots the ball and gets to the line and how well they get extra possessions by forcing turnovers and getting offensive rebounds dictates how well they play. Taking the percentage those things eliminates the bias of undervaluing slow, methodical styles of play. This is how Wisconsin can have a good team without scoring very many points: they play exceedingly well on a per-possession basis. Adjusted offensive efficiency and adjusted defensive efficiency encompass all of the four factors and give a value for the points scored and conceded over 100 possessions.

These stats are great. I love tempo-free stats because they take away human biases and give a better picture of how games were won and lost over the course of the entire game. Still, I've found a flaw with them that I hope to correct: the values in and of themselves are largely worthless to the average fan. How good is an offensive rating of 96? How much of a difference is there between an offensive rebounding percentage of 30 and 35? What's a good turnover rate? All of these values are seemingly arbitrary without the proper context, so my goal is to provide these numbers with some context for them at the same time.

Basically, I decided to normalize the values by using this relatively simple formula:

Of course, this works for other stats as well, like eFG%, OR%, etc.

This is how 2010-2011 Michigan's normalized numbers look compared to the unadjusted numbers: 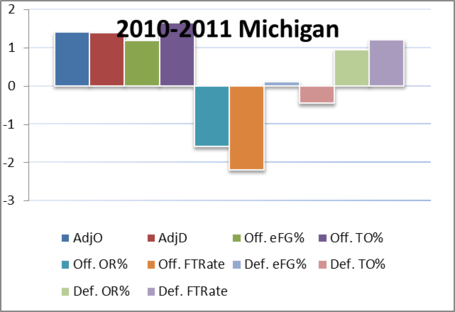 Other than Michigan's complete inability to get to the line or crash the boards on offense (and their surprising success at cleaning up the glass on defense), the graphical representation of these numbers compared to each other shows how good -- or bad -- each number is in a much clearer and concise way than just giving the national rank or unadjusted numbers.

Comparing teams to each other is also easier with this metric, if one normalized value for defense is subtracted from the corresponding offensive value from the other team. Consider Michigan's early-season, marquee matchup with Memphis (with last years' numbers): 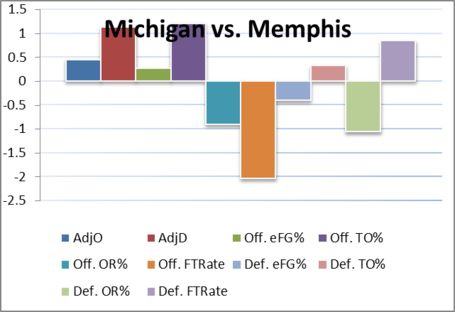 Strictly based on last year's numbers, it looks like Michigan has a decided advantage, at least defensively, but will have a very hard time getting to the free throw line.

Plotting trends year to year can also be helpful. Here are the defensive trends over the past three years for Michigan: 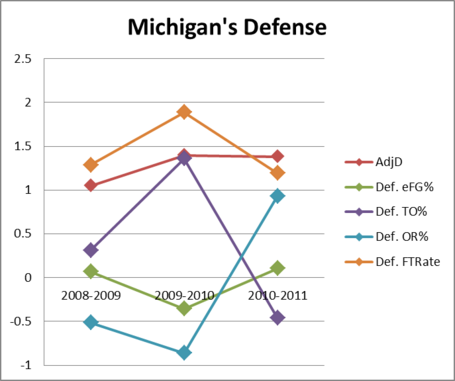 It's kind of surprising that the defense actually improved from the Tournament appearance in 2008-2009 to the disappointment in 2009-2010, but the drastic improvement in preventing offensive rebounds and the drastic fall-off in forcing turnovers from '09-'10 to '10-'11 is really weird. It can probably be attributed to the shift from using the 1-3-1 frequently to going pretty much strictly man-to-man last year.

So yeah, that's pretty much it. Hopefully this can be helpful and informative as the year rolls around, I think it will be much better than simply looking at the raw values alone.