It wasn't pretty -- not even close -- but Michigan eventually pulled away from Ferris to notch a 26-point win in its season opener. The Wolverines struggled early on; the score was only 22-16 at the half and Ferris actually pulled it within one point after the second half started. Fortunately Michigan outscored the Bulldogs 37-12 after that point and finally asserted its superior talent  over a much weaker opponent. It was a collective effort for U of M with Evan Smotrycz and Stu Douglass as the co-leading scorers with 14 points apiece, Tim Hardaway Jr scored 11, and Jordan Morgan pitched in 7 off of the bench. It was a little surprising to see Douglass get the start, but apparently Trey Burke was late to the shoot-around so he had to sit the bench, even though he was named the starter.

To be totally honest, I think that there's a lot of reason to be concerned about this Michigan basketball team. Yes, I know we're two games into the season and yes, I know that one stellar performance in Maui will have me changing my tune. Still, Ferris State is not very good at all (they lost to D-III Calvin College earlier this week) and they hung with Michigan for about 30 minutes of the game. Ferris was absolutely killed on the glass by Michigan State in their exhibition game, but they still did well and more than held their own tonight against Michigan. Michigan also really struggled on offense -- one game against Wayne State could be an aberration but another very poor half offensively against Ferris could signal a trend. Not having a true point guard hurts of course (although Stu looked pretty good tonight, Trey, not so much) and that could be a serious concern down the line. Shooting was the issue again tonight though, with bad shooting across the board until Michigan's late run to put away Ferris. Jon Horford's performance was particularly disconcerting: he didn't attempt a field goal after starting and playing fifteen minutes, he didn't look aggressive or assertive offensively, and a little lost when the Wolverines were running their offense.

Hit the jump for the normalized four factors and more analysis. 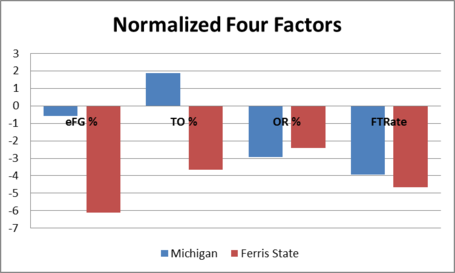 As a reminder, the four factors are Effective Field Goal Percentage (eFG %), Turnover Percentage (TO %), Offensive Rebound Percentage (OR %), and Free Throw Rate (FTRate). An explanation for normalization can be found here.

Well, this definitely wasn't an offensive battle by any means. Ferris was absolutely terrible from the field (28% total, 17% from three), and both teams struggled getting to the line and getting offensive rebounds. The only thing Michigan did well was holding onto the ball which has been a staple of Beilein teams since he's gotten here. The offensive rebounding number for Michigan was particularly disconcerting: Michigan should have easily been able to dominate Ferris State's big men and get good second chance opportunities. You know that it's a bad performance on the offensive glass when your leading offensive rebounder is Matt Vogrich (with a whopping two boards) and your starting center doesn't get any. It's not a priority of the offense to crash the boards, but still, this was not very good. The field goal shooting was iffy, but not too bad. Defensively, Michigan overcame a few lapses to put together a stellar and dominant performance. It should be expected against a D-II school, but Ferris did much worse against Michigan (0.55 PPP) than they did against MSU in an earlier exhibition (0.84 PPP). That's definitely encouraging -- Michigan forced a decent offensive team (as decent as D-II teams get, anyways) to a very poor shooting night. Ferris never got good looks on the outside as Michigan closed out on shooters extremely well. The Bulldogs got a couple easy dunks, but struggled to get anything else.

As for the players themselves, it was an uneven day across the board for Michigan. Evan Smotrycz had a particularly nice day, notching 14 points on 3-4 from the 3-pt line as well as three rebounds and two blocks. Stu Douglass had a really encouraging day as well: Stu ran the offense pretty well, scored 14 points (3-7 from three), grabbed 5 rebounds and had four assists. It was a surprising start for him so it was good to see him stake a claim to the job with some solid play. Tim Hardaway had a relatively quiet night, but he still scored in double digits (11). Horford started over Jordan Morgan, and Morgan proceeded to score more points (7 for Morgan, 0 for Horford), grab more rebounds (6 to Horford's 3) and play 17 minutes to 15 for Horford. I would be really surprised to see Morgan on the bench to start the game for very much longer as he looks to be a notch above Horford at this point. It seems like Horford's become a solid backup though, so that's an encouraging development. Matt Vogrich had a nice three-point play, but it was surprisingly not from behind the arc as he was 0-3 from deep. Trey Burke struggled quite a bit, but the potential is definitely there. If he starts to connect on his shots, watch out. Walk-on Eso Akunne played some non-garbage time minutes and finished with 4 rebounds.

MVP: Stu Douglass. Even though Burke was supposed to start tonight, Douglass played extremely well and looked like he's not going away easily. Trey's probably Michigan's best option long-term, but a 14 point, 5 rebound, 4 assist performance from Douglass will always be welcome. Even if (or when) Trey takes the starting spot, Stu will play starter minutes as the first man off of the bench. He's just too good to keep off the floor.