Now that Michigan's basketball team has gotten its feet wet with two D-II creampuffs, it's time for some bonafide, real-life, D-I... cakewalks. For the "mainland" part of the Maui Invitational, there are a few teams that travel to the campuses of the participants in the Tournament in Maui. Belmont has already traveled to Duke -- they almost came away with a win in Cameron -- and will travel to Memphis to provide the Tigers with a pre-Maui test. Unlike Belmont, Towson and Western Illinois (the Wolverines' next two opponents) are, um, bad. The Tigers and the Leathernecks are ranked 319th and 332nd in the KenPom rankings, so they're two of the worst teams in the country.

Towson plays in the Colonial Athletic Association, home to recent Cinderellas George Mason and VCU, and managed to pull a feat that would make Rod Marinelli proud: they went a perfect 0-18 in conference play last season. Their best win was a two-point victory over our friends in Kalamazoo; a significant win, considering they only had three others. Here are their normalized four factors from last year: 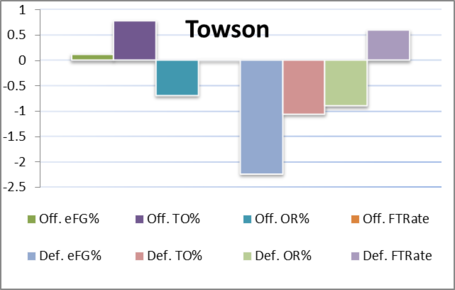 Here's something you wouldn't have expected out of a 4-26 team: they actually had an above-average offense last year. The Tigers were slightly above-average at holding onto the ball, they were pretty close to the national average with shooting and getting to the free throw line, but were slightly below average at crashing the offensive boards. Unfortunately for the Tigers, they lose their top seven leading scorers from a year ago, and only return one guy (sophomore forward Enrique Gumbs) who used more than 15% of the team's possessions when he was on the court. Robert Nwankwo led the team in rebounds and was third on the team in points back in 2009-2010 and took a redshirt a year ago. He did tally a double-double against Kansas this year, but he took 14 shots to do it. This is the definition of a team that has incredibly little experience. Michigan's defensive performances have been stellar to date (against extremely weak teams, although I guess Towson is another one, so whatever), so a continuation of those would be great.

As evidenced by the poor defensive numbers above -- and they are really bad -- Towson is the perfect team to let Michigan out of its current offensive funk. Kansas dropped triple digits on the Tigers in their only game so far this season, so it looks like the defensive struggles will be a recurring theme this year. Michigan's shot the ball extremely poorly so far, so facing the team that finished as the third-worst 3 point field goal defense in the country should help them out of this malaise. Michigan really should dominate Towson here: expect lots of bombs from guys like Zack Novak, Stu Douglass, and Trey Burke, complete offensive performances from Tim Hardaway Jr, and Evan Smotrycz, and assertive and punishing inside play from Jordan Morgan and Jon Horford. I'd also love to see a game with incredibly few turnovers, especially from Stu and Trey, which is what should probably happen. Kansas's barrage of points came in a pretty fast-paced game (with 68 possessions), but 1.47 points per possession is unbelievable.

In early-season basketball games, sometimes mid-majors come in and take down ranked teams in their own building *cough, Vanderbilt* but those teams are frequently very good, very experienced teams that are unknowns to the casual basketball fan (who eventually sees them as a decent seed in the NCAA Tournament several months later). Towson is not one of those teams. Michigan should win running away in this one.