This game was bad. Western Illinois may very well be a decent team -- Ceola Clark is a phenomenal player and he played better than anyone else on either team tonight -- but come on, they were the 332nd best team in the country (per KenPom). The bottom line is this: Michigan hasn't looked like a Top 25 team, they haven't looked like an NCAA Tournament team, and they haven't looked like they'll be competitive against Memphis in Maui. It might seem like I'm overreacting to a really bad performance, but Michigan hasn't played well yet all year save for ten minutes each against Towson and Ferris State. I get that we've only seen a very small sample size. Still, there's a lot of reason for concern. There's plenty of time to improve though.

Western Illinois jumped out to an early 8-4 lead before Michigan went on a 14-2 run and looked like they were going to run away with it. To WIU's credit, they battled back before halftime tie it up going into the break. In the second half, Michigan made more of a concerted effort to get to the free throw line and attack Western Illinois' bigs who were in foul trouble. It paid off as the Wolverines managed to go up and keep a little bit of distance between them and WIU for pretty much the entirety of the second half. It was a close game throughout -- and Michigan seemed like it could never put it together enough on both ends of the floor to put the Leathernecks away for good. 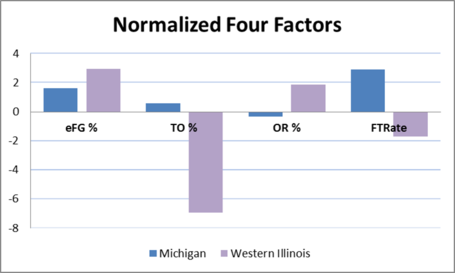 Western Illinois was shooting the ball out of their minds. They shot 48.8% from the field, 43.8% from behind the arc, and their eFG% was 57.3. A performance like that, especially from a team as weak as Western Illinois, is incredibly atypical. WIU hit their fair share of what-on-earth-was-that shots, but still, Michigan did a poor job of closing out on shooters and the Leathernecks got a lot of great looks from the field.

Michigan looks to be pretty good at forcing turnovers. They entered the day with the 4th best defensive turnover rate in the country (inflated by the poor competition, of course), and the Wolverines' ability to prevent turnovers was probably the biggest reason they didn't suffer a horrific loss. WIU turned the ball over on an absurd 18 of their 55 possessions. Part of this was due to their own ineptitude, but Michigan did a great job of pressuring the ball and forcing turnovers.

Western Illinois had the same amount of offensive rebounds as Michigan did, but got them at a better rate than the Wolverines did. Defensive rebounding has been a serious concern under Beilein, and it looks like those issues might be back after they appeared to be corrected last year. Darius Morris' rebounding ability on the defensive end was incredibly overlooked, but I'm afraid that Trey Burke and Stu Douglass won't get anywhere near that level of defensive rebounding from the point guard position.

An average performance on offense against a much lesser opponent is discouraging. We knew that losing Darius would create a lot of problems on offense, but Trey has played well running the offense and it still looks disorganized. There was a play in the first half when Michigan was running a play and Hardaway and Horford collided and threw off the timing. It's just been sloppy across the board -- something that appears to be universal in the first few weeks across college basketball, teams are getting in their groove on offense.

Player recaps after the jump

It appears that Michigan's main rotation is at eight.
I think there's legitimate reason for concern as the Wolverines head to Maui for the games next week. I'll get into it a bit more in the Maui preview, but Memphis is a legitimate Top 15 team and poses a lot of challenges for the Wolverines. Michigan hasn't looked good so far, but hopefully that can be attributed to youth and playing down to their opponents' level. But hey, a win is a win and Michigan is glad to be 3-0 at this juncture.