Now that Michigan has dispatched its first three opponents, the Wolverines are taking on the #10 Memphis Tigers today on ESPN 2 at 3:00 P.M. Memphis has looked great so far this season; the Tigers ran right through a tough Belmont team for a 97-81 win in their only contest. Michigan, on the other hand, has looked less than impressive in slow, boring wins over Ferris State, Towson, and Western Illinois. The Wolverines have been offensively challenged so far this year: the outside shot has not been falling, an inside presence is sorely lacking, and Michigan has not been able to put its foot on the gas against weak teams (save for ten minutes against Ferris and Towson respectively). This tough early test will go a long way in seeing how good Michigan really is this year. Memphis looks to be a legitimate top ten team and this could be the most difficult non-conference game that Michigan will have all year.

Since Memphis pretty much returns its whole team (and has added a blue chip wing, Adonis Thomas) and since they only have one data point from this year, here's a look at their Normalized Four Factors from a year ago: 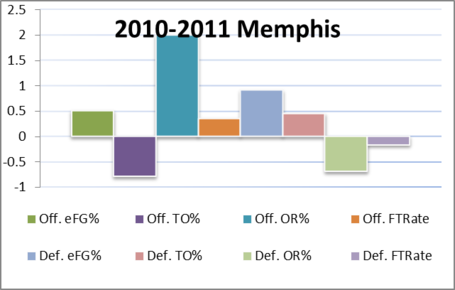 Memphis was an extremely young team last year, and they suffered their fair share of growing pains throughout the year. Fortunately for the Tigers, everything came together during the CUSA Tournament and the Tigers won three games in three days (including a one-point road win against UTEP in the Championship). This late run propelled Memphis into the NCAA Tournament, where the twelve-seed Tigers dropped a two-point game to the five-seed Arizona Wildcats in the first round. As you can see, the Tigers were decent at a lot of things, but didn't really have an overwhelming strength outside of their ability to crash the boards. Somehow this offensive rebounding prowess did not translate to the defensive end, as the Tigers allow their opponents their fair share of offensive boards. Memphis also did a very poor job of holding onto the ball on offense -- something that plays in heavily to Michigan's strengths (the Wolverines are currently leading the country in defensive turnover rate) -- so look for a lot of turnovers from the Tigers as Michigan is somewhat likely to break out the 1-3-1 defense in an attempt to confuse the Tigers.

Personnel-wise, it all starts with sophomore point guard Joe Jackson. Will Barton led the Tigers in scoring, but Jackson turned in about ten points per game and was the focal point of the Memphis offense. He's going to run into a former teammate here in Maui as he and Tim Hardaway Jr played on the same U-19 team together this summer, and he has improved substantially since his freshman year. The main weakness for Jackson last year was his propensity for turnovers -- he had a very, very bad 29.1 turnover rate -- so forcing turnovers is a way for Michigan to limit his effectiveness. Along with Barton, an athletic wing who shoots a ton of threes despite being much more productive inside, and Jackson, the Tigers are led by Wesley Witherspoon and Tarik Black. Witherspoon is a tall, inside-outside threat who hit all eight(!) of his three point attempts vs. Belmont, and Black is a physical center who excels at crashing the boards. Across the board, Memphis looks to be bigger and more athletic than Michigan, so the Wolverines will have to work really hard on offense and force Memphis turnovers to stay in the game.

KenPom's numbers are giving Michigan a 37% chance of victory (after initially opening as a pick 'em before the season), so an upset wouldn't be that surprising. Michigan has traditionally struggled at the beginning of the year under Beilein, but a win here would be huge for the program's momentum heading into a probable second-round matchup against Duke. I was pretty confident in a win over Memphis before the season started, but the impressiveness shown by the Tigers (and the lack thereof from Michigan) makes me a little more nervous. Michigan needs to slow the game down, manufacture good looks, and force a lot of turnovers to win. If the offense finds its rhythm and if Tim or Trey Burke can turn in a great offensive performance along with contributions from role players, I could see this one going down to the wire, but I wouldn't be surprised if Memphis came out and just ran away with a win