It seems like any possible early-season concerns have been assuaged by beating Memphis on Monday afternoon in Maui. Michigan's offense had looked listless struggled against everyone... and promptly shot the lights out against Memphis. Michigan had failed to put together a complete forty minutes so far... and led Memphis for pretty much the entire game. Michigan hadn't given anyone the impression that they are a top fifteen team... and then they put the hurt on Memphis and looked like the top-tier team that they are. 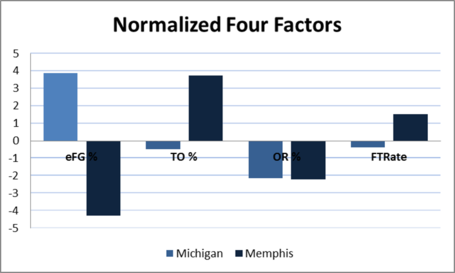 Michigan basically just shot the ball so much better than Memphis, and that's really where the game was won. Interestingly, almost all of Michigan's damage came from inside the arc -- the Wolverines only hit 30% of their three pointers -- as Michigan ate the Tigers up inside to the tune of 21 made two point field goals on 31 attempts. Tim Hardaway Jr and Trey Burke combined for 35 points and didn't make a three point shot, proving that Michigan can win games without relying excessively on the three. Michigan's biggest key to the game on defense (forcing Memphis turnovers) was a resounding failure as the Tigers turned the ball on only eight possessions, but Michigan made Memphis work for every basket and kept them off of the defensive glass With all of Memphis' offensive firepower, holding them to less than one point per possession is remarkable. It was a collective effort on defense and on the glass; Michigan's 2-3 zone forced Memphis into a ton of outside shots in the second half and the Tigers obliged by bricking almost every single one.

I can't think of any player on the team that didn't have a good game. Tim was the leading scorer with 21 points (including a remarkable 9-10 from the free throw line), but Trey stole the show. Joe Jackson is a very good point guard for Memphis and Burke outplayed him for forty minutes. He scored in a multitude of ways (not dependent on his three point shot, which was encouraging), ran the offense well, and played stellar defense against one of the better point guards in college basketball. Even though Jordan Morgan and Jon Horford were each limited by fouls, they combined for ten points and seven rebounds in just over a half of basketball. Evan Smotrycz also turned in a very good game -- he scored seven points on five shots and notched a team-high eight rebounds against an imposing front line -- and put a poor performance against Western Illinois way behind him. Zack Novak turned in a typical game: good defense, decent rebounding, and a few big threes. Stu Douglass had a few really bad three point attempts, but he still knocked down two of them, nabbed six rebounds, and played very solid defense. Michigan emptied the bench in the first half due to foul troubles -- and possibly to keep the starters fresh for the next few days -- and Eso Akunne, Matt Vogrich, Colton Christian, and Blake McLimans all contributed.

Michigan is a better team than Memphis is. Michigan didn't win because John Beilein outcoached Josh Pastner (even though he did) and overcame the superior talent of Memphis, Michigan won because they are a better team. For my money, Burke and Hardaway are better than Jackson and Will Barton. Michigan's supporting cast is better than Memphis'. Even though Michigan had a better gameplan than Memphis and executed far better than the Tigers did, Michigan has a more talented team and it showed. I'd say that after this game, Michigan looks like a top fifteen team and looks like it could make a lot of noise in the Big Ten. Memphis is a good team; Michigan is better. Now hopefully Michigan can string together two more wins and pull away with the Maui Invitational Title. They look to be capable.