Seth Curry and company were lethal from the field (AP Photo)

A day after a big win against a top ten opponent, Michigan fought hard but dropped its second consecutive game to an elite opponent with an 82-75 loss to Duke. The Blue Devils stormed out of the gate early with a 9-0 run and never trailed during the contest. Michigan trimmed the lead to two points midway through the first half, but Duke stretched the lead out to fifteen and led by twelve at the break 34-22. Despite the lights-out shooting from Duke, cold shooting from the Wolverines, and zero first half points from Tim Hardaway Jr, Trey Burke kept Michigan in the game heading into the break with eight points and three assists. Michigan went on an 11-3 run at the start of the second half to narrow the gap to four, but Duke eventually pulled away and were able to hold off Michigan with clutch shooting from Ryan Kelly, the BEST PLAYER EVER Austin Rivers, Seth Curry, and Andre Dawkins (who each scored at least 14 points and combined to shoot 52.4% from three on the game). Hardaway and the rest of the Wolverines finally heated up from the field to score 53 points in the second half; it's just that Duke was able to continue their excellent shooting throughout the whole game.

Trey Burke played the best game of any Michigan player so far this year, totaling 17 points and 9 assists with only 3 turnovers. Burke was 8-17 from the field -- not very efficient -- but he looked poised, mature, and very, very talented against Duke. He seems like he's the only one on the team outside of Hardaway that can create his own shot consistently, and his passing ability in traffic reminded me a lot of Darius Morris. It looks like Trey is living up to the hype *crosses fingers.* Tim turned in an inconsistent performance; Duke made stopping him the primary objective and succeeded in keeping him off of the scoreboard in the first half. Hardaway was much more assertive in the second half as he was unafraid to take three point shots, he drove the ball with authority, scored around the rim, and got to the charity stripe en route to 19 second half points. Consistency was a major knock on Hardaway last year and this performance against Duke makes you wonder what would have been different if Tim had taken the reigns earlier in the game. Jordan Morgan turned in a nice game, getting 6 rebounds and scoring 12 points on 6-7 shooting. Jordan definitely benefited from the stellar passing of Morris last year and he notched similar results with good passes from Trey. It was a tough game for Zack Novak, but he still scored 11 points, pulled down 5 rebounds, and had 2 steals. Giving an intentional foul at the end of the game wasn't the best move though. Stu Douglass also put together a fairly nice game as well despite not shooting well from three; Douglass scored 9 points and grabbed 4 rebounds. Evan Smotrycz was in foul trouble but made an impact with 5 points, 5 rebounds, and 2 steals in his 12 minutes. 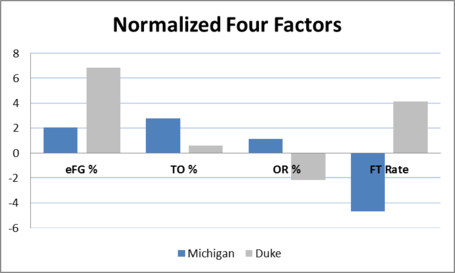 Duke's shooting really sticks out here. The Blue Devils shot 26-56 (56.5%) from the field, 11-21 (52.4%) from behind the three point arc, and 19-27 (70.4%) from the free throw line. It's virtually impossible to beat an opponent that's shooting that well -- Duke got open looks and converted against Michigan's man and zone defenses pretty much all night. Andrew Beilein tweeted "People overanalyze games. It's basketball, stupid--make open shots"  at halftime, and he's totally right. Michigan actually held onto the ball and cleaned up the defensive glass slightly better than Duke did, and the free throw disparity was inflated by the intentional fouling late. This game basically boiled down to the fact that Duke was able to hit their shots for forty minutes and Michigan was not. Part of this was due to Michigan's defense -- the Wolverines were sometimes slow to rotate onto shooters and didn't close out well -- but overall, it wasn't a poor defensive performance by Michigan. Unfortunately, Michigan needs better than "it wasn't poor" against teams that shoot like Duke does. 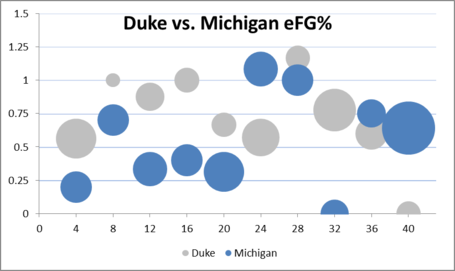 As you can see, Michigan improved significantly from the first half to the second half, but the damage was already done with a very poor first half from the field. I made the comment at halftime that Michigan really couldn't play a half much worse than they did, and to their credit, the Wolverines turned it around in the second half. Tim Hardaway seemed to be the best example of this turnaround: he went 0-6 for 0 points in the first half and went 6-8 for 19 points in the second half  Looking at the graph, it shouldn't be surprising that Duke pulled away between the twelve minute and eight minute marks in the second half. Michigan trailed 51-45 with twelve minutes left but the gap widened and Duke led 63-48 with eight minutes to play. Also, this chart makes me wonder if Michigan could have mounted a comeback during garbage time if Duke hadn't shot their free throws so well; the Wolverines scored 18 points on 14 shots in the last four minutes.

Stepping away from the stats a bit, the game wasn't that bad. Michigan struggled with Duke's offense, but we're not going to see a 6'11" shooter that can stretch the floor like Ryan Kelly can, we aren't going to see a freshman with the skill of Austin Rivers, and we're not going to see too many complementary players like Andre Dawkins and Seth Curry. Duke was one of the best teams Michigan will face all year and battling back from adversity for most of the game is a good sign. Lesser teams would have been run out of the gym by a team with Duke's talent that shot like Duke did, but Michigan hung tough and showed that it can go toe-to-toe with the nation's best. It's disappointing to drop a second straight game to Duke, but splitting a pair of games against top ten teams is not bad at all.

The Wolverines face UCLA in the third-place game today at 7:30 on ESPN. Going 2-1 in Maui would be a perfectly good outcome for Michigan, and UCLA hasn't looked good this season. Dropping "home" contests to Loyola Marymount and Middle Tennessee State could have spelled disaster for the Bruins, but they showed some signs of life in a loss to Kansas today (getting Reeves Nelson back from the doghouse has been huge). Michigan should shoot the lights out against UCLA's very poor field goal defense. It's not a gimmie, but Michigan's in great shape to come home to Ann Arbor with a winning record on the islands.