Michigan Pulls Away From UCLA, Finishes Third in Maui

Share All sharing options for: Michigan Pulls Away From UCLA, Finishes Third in Maui

It was a good finish to the Maui Invitational for Michigan as the Wolverines exerted its superiority over UCLA in a comfortable 16 point win. UCLA entered the game with a winless record against D-1 opponents: an 11 point loss to Loyola Marymount, a 20 point loss to Middle Tennessee State, and a 16 point loss to Kansas. It was good to see Michigan get out and beat an inferior opponent for the first time all year. UCLA actually got out to an early 8-6 lead, but a 13-0 run from the Wolverines put Michigan ahead by double digits before the eleven-minute mark of the first half and the Bruins didn't lead for the rest of the contest. Jon Horford was the star of the first half -- he connected on all five of his field goals and added a pair from the line to notch 12 points -- and Michigan led by seven at the break. In the second half, Michigan never let UCLA within a possession of the tie or the lead.

Zack Novak led the team with a career high 22 points (7-8 shooting, 4-5 from three, and 4-5 from the line) and Tim Hardaway Jr added 20 (8-13, 1-3, 3-5). Novak in particular had a phenomenal game; he was effective as a spot-up shooter but also added a pump fake to lose the defender and hit a long two. Offensive outputs like this from Novak are few and far between so this was a pleasant development. Hardaway's shot hasn't been there from outside this year, but the rest of his game -- shooting mid-range jumpers and runners, getting to the basket for layups and dunks, and drawing contact to get to the line -- has really developed. This was one of those nights from Tim as he topped twenty points without making more than one three pointer. Horford was very, very impressive in Jordan Morgan's absence (Jordan was in foul trouble and only played eleven minutes), and he showed some of the promise that makes him an exciting prospect. He didn't play mistake free and he didn't face good competition from Joshua Smith and the Wear twins, but 12 points, 7 rebounds, 3 blocks, and 2 steals is a very good night. Evan Smotrycz did most of his damage at the five position with 7 points and 8 rebounds in an up-and-down game. Stu Douglass was 3-4 from the field for nine points but had five really bad turnovers and it appears that Trey Burke is a far better option at the point guard spot. Speaking of Burke, he didn't have the best night (5 points on 2-7 shooting, 5 assists, 3 rebounds and 3 turnovers) and showed that he's a freshman with some silly fouls. Still, he's very good in transition and looks comfortable running the offense. 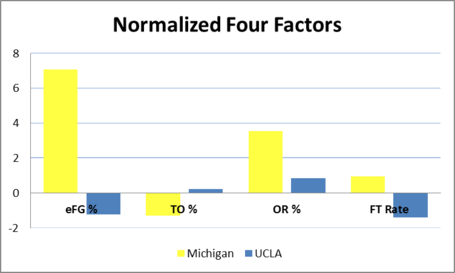 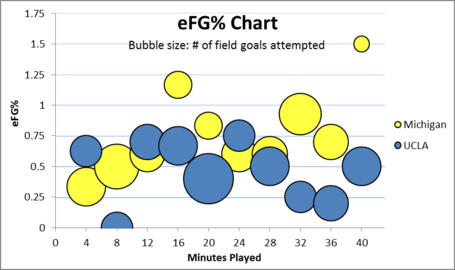 A night after Duke lit up the Michigan's defense for a 68.5 Effective Field Goal Percentage, Michigan went out and bettered that number with a 69.1%. The Wolverines were 29-47 from the field (61.7%), 7-14 from three (50%), and 14-20 from the free throw line (70%). UCLA's field goal defense is notoriously poor, so a performance like this isn't exactly a huge surprise. Michigan is actually the best team in the country at shooting two point field goals 62.8%, and this stems from their ability to stretch the defense with good perimeter shooters. They continued this against UCLA (although having Josh Smith in the middle definitely helped). Michigan's field goal shooting was pretty consistent throughout the game, even though they only hit two three-point shots in the first half and wound up taking a low percentage of three balls over the course of the whole game. Surprisingly, Michigan also crashed the offensive glass very well and got to the free throw line often, but again, UCLA's interior defense is pretty awful. The amount of turnovers was a little abnormal though. The Wolverines also turned in a solid defensive performance across the board and forced UCLA into a number of bad shots in the second half.

All in all, Michigan played a solid game against UCLA and finally outplayed a weaker opponent for 40 minutes for the first time all year. Getting contributions from role players like Horford and Novak is extremely encouraging, and seeing Tim play very well without relying too heavily on his three point shot is encouraging as well. UCLA is a bad team -- seriously, they're 0-4 against D-1 teams -- so this win won't mean a whole lot in the grand scheme of things, but winning this one to get to third-place and 2-1 overall in Maui means that this trip was a success.