Michigan will take on the Virginia Cavaliers in Charlottesville, Virginia tonight to kick off the Big Ten / ACC Challenge tonight at 7:00 on ESPN2. It's the first true road game of the season for the (still) young Wolverines squad, and they are facing a unique Virginia team that's experiencing a bit of a revival under Tony Bennett. Virginia is currently 5-1 on the year and are coming off of a 2-1 performance in the Paradise Jam tournament in St. Thomas. They dropped their first game in the Caribbean to TCU (who's currently ranked 185th in the country by Ken Pomeroy) 57-55, but recovered to win their next two and get to fourth place overall. Virginia has only payed one team in the KenPom Top 100 -- a 49-35 win over #71 Drexel -- so Michigan is the toughest team that they'll have faced by this point in the season. On the other hand, Michigan is facing a dangerous, quirky opponent in a hostile environment, so this should be an excellent opportunity for Michigan to gain some experience for Big Ten games on the road and notch a key win that will pay dividends in March. 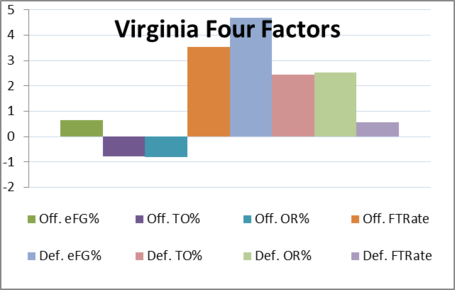 I've already used the words "unique" and "quirky" to describe Virginia, so I guess I should elaborate: Virginia runs a very slow, plodding style of play (think Wisconsin), and an unusual "pack line" defense. On offense, UVA is pretty average; they aren't great three point shooters and they don't take a lot, they aren't great at getting a lot of offensive rebounds, but they're a great free throw shooting team and they get to the line a lot. On defense, Virginia is excellent. I'm not that familiar with the pack line, but to my understanding, it consists of a soft man-to-man defense with defenders sagging off of their man to about two feet inside of the three point line, the imaginary "pack line." The defender on the ball pressures the ball and defenders close out quickly on shooters, so good ball rotation and hitting open shots is imperative. The pack line clogs the middle and prevents penetration and good looks inside, something which may force Michigan into a lot of outside shots. Trey Burke has looked pretty good with drive-and-kicks and Tim Hardaway Jr has been hitting a lot of mid-range shots, but Virginia is excellent at stopping inside shots. Virginia's field goal defense is phenomenal, they're good at forcing turnovers, and they're good at getting defensive rebounds. There's a reason why they're only allowing 45 points per game, and it's not necessarily because they play slowly. Virginia just has a great defense.

Mike Scott is Virginia's best player; he's coming off of an injury but he's a big double-double machine at the power forward spot. I'm not exactly sure who we want guarding him -- Novak and Smotrycz could each struggle against him -- but it looks like Evan will be tasked with stopping Scott. Joe Harris and KT Harrell are wings who can hit outside shots, Jontel Evans runs the point for the Cavaliers, and big 7 footer Assane Sene is the center for UVA.

This is a big game for Michigan, as a road date against Virginia is probably our toughest game until January, so a win here would help send Michigan on its way to a 1-loss out-of-conference season (although Iowa State and Oakland could prove rather tricky). I'm not sure if Michigan's quite ready for a true road environment with Trey running the point, but I guess we'll see tonight. Virginia has the potential to put some scares into Duke and North Carolina and I'm guessing that they're a top five ACC team, but I like Michigan to take one on the road. If you haven't seen my Q&A with Brian of Streaking The Lawn, it's here. My response to his questions is here.