Michigan headed to Charlottesville after a tough three games in Maui and ran into a very solid, well-coached Virginia team that needed a marquee win. The result: Michigan hung with Virginia for about 30 minutes -- actually led for long stretches of the game -- before foul trouble finally caught up with the Wolverines and Michigan succumbed to Virginia's stifling defense and the inside power of Mike Scott for a twelve-point road loss. At this point, serious concern is unwarranted. It was an ugly performance on the road against a team that Michigan is probably better than, sure, but an indicator of serious problems down the road? I don't think so. Virginia's defense is excellent, one of the best in the country, and they shut down a Michigan offense that was forced into prolonged stretches without its top players.

When Tim Hardaway Jr picked up his second foul, someone I was watching the game with asked when he'd be back. Despite the need for an experienced scorer on the road, despite the need for some offensive punch in an anemic half, and despite Tim's extremely low foul rate, my answer was easy: "his butt will be glued to the bench for the rest of the half." John Beilein is extremely leery of having players with two first-half fouls stay in the game. While it didn't cost Michigan the game, having Tim in to open up a lead against Virginia's own inept offense probably would have been a good move. Hardaway finished with one field goal attempt in the first half and five points total on 2-9 shooting in the 25 minutes he was in the game. I guess we should know by now that Beilein won't put in players with two fouls until after halftime, and I guess we have to live with it, for better or for worse.

The game was still tied at 41 when Evan Smotrycz picked up his fourth foul with slightly under ten minutes left, and by the time he reentered the game with six minutes left, Virginia had gone on a 12-0 run to go up 53-41. In Smotrycz's absence, Mike Scott victimized Hardaway and Zack Novak for three field goals and kicked it out to an open three-point shooter for an assist. For his up-and-down nature and propensity to pick up a lot of cheap fouls, it's not ideal to have Michigan rely so heavily on Smotrycz's presence, but we need him on the floor, particularly against bigger fours like Scott. This stretch was part of the larger 19-2 run that won the game for Virginia, but this key stretch is where Michigan let the game get away from them.

As for the offense in general, Michigan just ran into a defensive nightmare on the road. Tony Bennett's pack line defense consistently stymied the Michigan offense, Virginia's quick and aggressive perimeter defense limited any hopes of penetration, and their tall, athletic front line pretty much owned our bigs all night. Coming into this game, Michigan had the highest two-point shooting percentage in the country, but finished at just 42% on the night. Virginia's defense excels at forcing its opponents to settle for long threes, and Michigan obliged (and actually shot 10-22 from three). Any inside production was hard-earned as the Wolverines were never able to get past the pack line or get the ball to guys on the block, and that's where Michigan struggled the most. Add in an atypically high turnover rate -- and credit goes to the pressure created by Virginia's guards -- an inability to get any offensive rebounds, and only four free throws from the field, and that's how an offense will lose you games on the road. 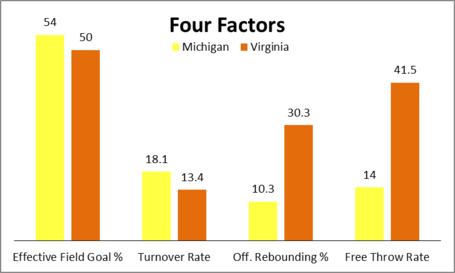 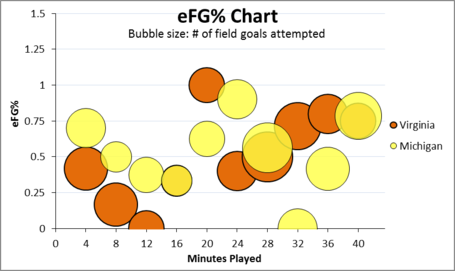 Yep. We weren't able to get enough field goals up in the first half (due to a bunch of turnovers and a grand total of one offensive rebound) to make Virginia pay for their poor shooting, and once they got going in the second half, we never answered. Having a performance like this offensively against an elite defense on the road is not a concern; Michigan will find it much easier to drive the ball and score inside against almost everyone else on the schedule. Michigan's defense will need to do better though, Virginia is not a great offensive team and they scored 1.15 points per possession. It's easy to point to why that happened; Mike Scott scored 18 points and grabbed 11 rebounds, Virginia shot 17-22 from the free throw line, and they got several extra possessions from their advantage on the boards. Michigan will struggle against big, athletic front lines (that actually can run an offense, unlike Memphis) and power forwards that can score all year.