Catching Up with Michigan Basketball

Share All sharing options for: Catching Up with Michigan Basketball

Sorry about my recent absence from Maize n Brew, finals week has been extremely busy. I should be back to writing more frequently now that finals are almost over.

Since my last post previewing Oakland over a week ago, Michigan has played and won three games -- a 90-80 win over Oakland, a 63-50 win over Arkansas Pine-Bluff, and an 87-57 win over Alabama A&M.

The big story in this one was the performance of Michigan's top three scorers -- Tim Hardaway Jr scored 21 points and Trey Burke and Evan Smotrycz each added 20. This was the first time that Michigan had three players each score 20+ points since Daniel Horton, LaVell Blanchard, and Bernard Robinson Jr did it back in 2002. Hardaway had a poor first half but turned it on it the second half with 18 points to pull away from OU, Burke was the best player on the floor for the Wolverines and should have finished with a double-double if Michigan's shooters had knocked down more shots, and Evan Smotrycz was extremely efficient with his 20 points coming on only 8 shots. Oakland was easily the best team Michigan faced in this three game stretch and a win's a win, but the Wolverines faced some issues against OU. The most glaring problem in this game -- and the past few games overall for that matter -- was turnovers. Michigan turned it over 17 times, which is almost a quarter of their possessions. Oakland's fast pace didn't bother Michigan too much and the Wolverines shot the ball extremely well, rebounded it well, but let Oakland to the line far too often (26 free throw attempts) and didn't hold onto the ball on offense. Still, it was great to see Michigan's second half offensive output and it's not likely that we'll see 58 points in a half again this year.

After coming home from Auburn Hills, Michigan faced two SWAC teams that are outside of KenPom's top 300. Michigan jumped out to a 24-6 lead over Pine-Bluff and it was pretty much over at that point, but a very poor second half saw a twenty point halftime lead turn into a not-as-close-as-it-looked 13 point win. It was an empty, Tuesday night game during finals week so I'm willing to give Michigan a pass (and really, the only repercussion letting Pine-Bluff back into the game is that Michigan looks worse to computer predictions now), but failing to guard Lazabian Jackson, Tim Hardaway hitting the deck hard (he's okay), and turning the ball over a lot was all a little disconcerting. This wasn't the first time that Michigan has let a far lesser opponent stay in a game that should have been a blowout, but it wasn't a big deal.

Fortunately the game against Alabama A&M was a much better performance from Michigan. Evan Smotrycz had a double-double with 17 points (on only FIVE field goal attempts!) and 11 rebounds in his best performance in a Michigan uniform, Burke scored 19 points, and Hardaway and Zack Novak each had 13. Michigan continued its torrid shooting from the field -- the Wolverines are now third in the country in eFG% -- and put together its most complete offensive and defensive performance of the year. This was the third game in a row with major turnover issues as Michigan turned the ball over 15 times against the Bulldogs.

Michigan finishes up its non-conference schedule with a home game against Bradley on Thursday at 6:30 on the Big Ten Network. After this game, Michigan will begin Big Ten play in a week, but taking care of Bradley to avoid a bad loss before conference play starts is important. The Braves had a nice stretch of 20+ win seasons a few years back but have slipped as a program and are struggling in their first year at 5-6 overall under Geno Ford. 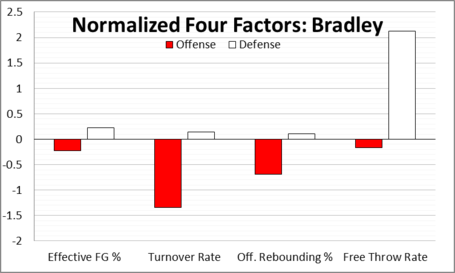 This is a team Michigan should handle easily. Bradley doesn't do anything particularly well other than keeping other teams off of the free throw line. The Braves don't generate extra possessions on offense very well -- their turnover rate (23.1) is very high and their offensive rebounding percentage (29.5) is low. So far this year Bradley has only one won road game and hasn't beaten anyone in KenPom's top 150. They faced Wisconsin a month ago and lost by 23 to the Badgers in the Kohl Center. Forward Taylor Brown might give Michigan some trouble on defense, but the Wolverines should coast against Bradley. Hopefully they cut down on the turnovers a bit.