After taking out two very weak SWAC teams, Michigan faced Bradley -- a team that, despite recent struggles, has been a solid mid-major program in the MVC -- to wrap up the non-conference season before Christmas break. Michigan beat Arkansas Pine-Bluff and Alabama A&M without much incident, but Bradley came in and challenged the Wolverines for the first time in a few games. Bradley tied the game at 33 with a thirty-foot buzzer beater heading into halftime; the Braves hung around with a combination of strong offensive rebounding (9 offensive rebounds in the first half), a confusing 3-2 zone defense, and poor interior offense from the Wolverines. John Beilein made some very good halftime adjustments (which were televised by the Big Ten Network) and Michigan used a 21-7 run midway through the second half to pull away from Bradley. All five of Michigan's starters finished with double figures in points -- Evan Smotrycz had 20, Tim Hardaway Jr had 16, Jordan Morgan had 15, Trey Burke had 12, and Zack Novak had 11 -- and the Wolverines did a much better job of keeping the Braves off of the offensive glass and solving the Bradley zone in the second half.

Beilein's halftime speech wasn't primarily focused on the team's lack of energy -- A mid-week game played a few days before Christmas probably wasn't conducive to the team being 100% focused -- but on getting good looks against the 3-2 zone. Michigan settled for bad three-point attempts and couldn't get the ball inside after Bradley broke out that zone before halftime, but Michigan made a concerted effort to get the ball inside to Jordan Morgan, did a much better job of getting out in transition, and was able to get much easier looks on the inside. Michigan's offense did a good job of spreading the ball around and had 25 assists in another good offensive performance. Michigan did a much better job of boxing out and getting defensive rebounds as well.

More after the jump...

Evan Smotrycz was the best player on the floor yet again for Michigan, and he continued to perform extremely well on offense -- he had 20 points (including 5 made three point field goals) on 11 field goal attempts, and grabbed 10 rebounds for his second double-double in the past four games -- and has averaged over 18 points and 9 rebounds a game over those four games. Such an output won't be feasible in Big Ten play, but Smotrycz has the fifth-highest eFG% in the country and has developed into one of the best offensive weapons in the conference. I honestly have no idea why teams keep leaving Smotrycz open, but I'll take it! Jordan Morgan had a quiet first half against Bradley after getting blocked on Michigan's first possession (2 points on 1-4 shooting), but turned it on in the second half with 13 points and showed both the opportunism and aggressiveness that he's been lacking at times this year. Morgan will be a very key player for the rest of the season, so seeing the kind of offense that he had last year was encouraging. Tim Hardaway had a couple early three pointers and sparked the Michigan run to put the game away with a highlight reel alley-oop and a layup in transition. He didn't shoot particularly well, but he has the ability to make those impact plays unlike pretty much everyone else on the Michigan roster. Trey Burke shot the ball poorly against Bradley and still almost finished with a double-double (12 points, 8 assists). I guess it shows how good he is; Trey can have a poor performance but still finish with a pretty good game. Zack Novak entered the game with one of the best offensive efficiencies in the country and while his 11 points on 9 shots wasn't exactly that efficient, he had a pretty solid game outside of two ugly turnovers against the Bradley zone. Thankfully a big bench performance wasn't necessary, but 3 points from the bench of Stu Douglass, Matt Vogrich, Blake McLimans, and Carlton Brundidge is less than ideal. 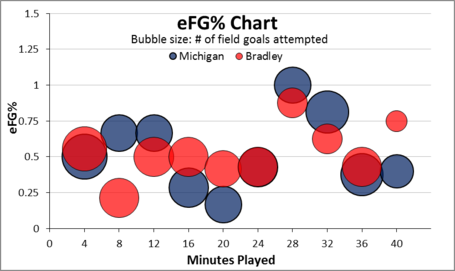 Considering the circumstances, it's not a big surprise that Michigan sleepwalked through the first half a little bit. The campus was quiet, everybody wanted to go home for Christmas, and Bradley wasn't a priority with Big Ten play coming up around the corner. Michigan didn't play well in the first half and were a little caught off-guard by what Bradley did, but a nice second half put any threat of an upset to rest. It wasn't the most dominant performance, yet it's a win and it's good that the Wolverines didn't suffer a bad loss heading into Big Ten play.