Michigan takes on Penn State tonight at 7:30 EST in the newly rechristened Crisler Center on the Big Ten Network. Michigan is currently 10-2 and ranked #16 in the country (AP), while Penn State is 8-5. It is the first conference game for both teams.

It's been a rough year for the Nittany Lions. After suffering the losses of Talor Battle -- who might have been the best player ever to play for Penn State -- Jeff Brooks, and two other seniors, as well as coach Ed DeChellis, hopes were not high entering this season. Penn State started off 3-0 against some cupcakes at home before losing to Kentucky by 38 at a neutral site in Connecticut. They notched their best win of the year against South Florida the next day, 53-49. Penn State won another bodybag game at home before losing 4 of 5 (the only win came against a pathetic Boston College team on the road), including a home loss to 5-7 Lafayette of the Patriot League. They finished the non-conference season with two more easy wins to get to 8-5. New head coach Pat Chambers has brought much-needed enthusiasm to Penn State's moribund basketball program and the team is making positive changes, but he'll need time. 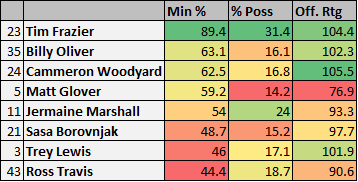 It's all about Tim Frazier for the Nittany Lions. Like Battle a year ago, Frazier is Penn State's most valuable player; he's on the floor the most and uses the most possessions when he's in the game. He's having a stellar year too: 17 points per game, 7 assists per game (and the second-highest assist rate in the country), and 6 rebounds per game while being pretty efficient is certainly impressive. Jermaine Marshall is the second-leading scorer for Penn State with almost 10 points per game. Billy Oliver is 6'8" but attempts almost three times as many shots from behind the arc as he does from inside (and he's only a 33% three point shooter). Sasa Borovnjak and Ross Travis are the other post options, and play much more interior roles. Trey Lewis and Cammeron Woodyard are the two best shooters on the team and are two of its most efficient options outside of Frazier. 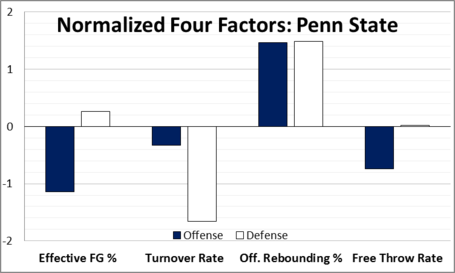 If there's one thing that Penn State does well, it's rebounding. The Nittany Lions pull down 38% of their missed shots and only allow their opponents to grab 27% of their missed shots. Nobody really stands out as a great individual rebounder -- even though it's impressive that Frazier can pull down 6 per game at 6'1" -- but they rebound well collectively. Penn State is poor on offense outside of their rebounding, especially shooting the ball. On defense, they're average, but really struggle at forcing turnovers.