Tim Hardaway Gets Back On Track, Michigan Coasts By Penn State

Share All sharing options for: Tim Hardaway Gets Back On Track, Michigan Coasts By Penn State 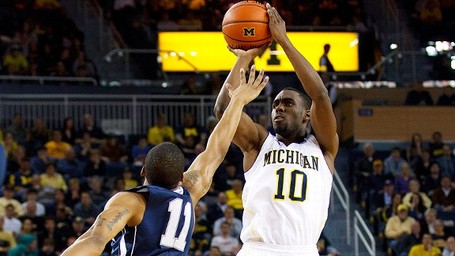 Penn State wasn't supposed to be a problem, but Michigan still took care of business in an easy home win to open Big Ten play. Michigan got off to a fast start with an 11-5 run sparked by two consecutive steals and layups by Trey Burke and finished the half on a 21-9 run after Penn State closed the gap to two midway through the first half. The Wolverines didn't look back from there and Penn State wasn't able to cut the deficit to single digits in the second half. The talent advantage was pretty obvious in this game -- Michigan was simply much better than Penn State and played like it all game. After playing down to the level of their opponents a few times out of conference (Western Illinois, Arkansas Pine-Bluff and Bradley stick out as examples), Michigan finally played at the level where they're capable of playing and Penn State simply didn't stand a chance.

The biggest takeaway from this game was the stellar play of Tim Hardaway Jr. Despite shooting 1-7 from behind the arc, Hardaway dominated from inside and shot 10-11 on two point attempts en route to 26 points. Tim hasn't been as consistent as Michigan would have hoped this season, but his newfound ability to get to the rim and score on mid-range shots has helped with his consistency and enabled him to notch his season-high in points last night. Hardaway has always been a very good outside shooter despite slumping a bit this year (31% this season, down from 37% last year), but getting to the rim and scoring inside in other ways will help him contribute when his outside shot is falling. When he starts to hit, he'll be pretty close to unstoppable -- the Nittany Lions could only stop him when he missed three pointers. Overshadowed by Hardaway's performance were solid games from Trey Burke -- 13 points, 7 points, 5 rebounds and 7-7 on free throws (but only 30% shooting) -- and Evan Smotrycz -- a 10 point, 10 rebound double-double.

Four Factors and more after the jump... 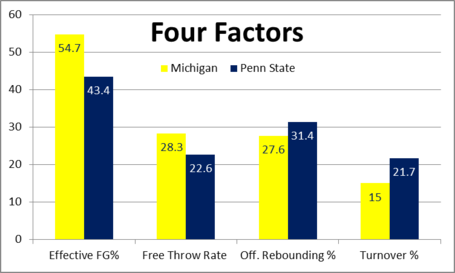 Michigan was better than Penn State in pretty much every facet of the game -- except for rebounding, even though Michigan held Penn State below their season average for offensive rebounding and exceeded their average for offensive rebounding allowed -- and it showed. The Wolverines continued their excellent shooting (and currently are 5th nationally in eFG% with 57.9) despite not shooting well from three. The most notable stat is Michigan's low turnover rate; the biggest potential danger provided by Penn State's defense was their ability to force turnovers and Michigan's propensity to give it away. Evan Smotrycz still turned it over three times, but Trey Burke -- a true freshman point guard in his first Big Ten game -- didn't have any and the rest of the team combines for only five turnovers. Perhaps the most surprising stat was Michigan having a higher free throw rate than Penn State -- Michigan was 13-15 from the line.

Tim Hardaway stole the show last night and was probably as dominant as he's been since the Memphis game. I touched on this earlier so I won't dwell on it, but Tim's versatility -- getting to the rim, slashing for layups, nice hook shots in the paint, and even posting up a little -- this year has been impressive. He's not getting a lot of national attention, but he has improved. The big man situation is questionable with Jon Horford out, so Jordan Morgan will need to step it up. He was aggressive and opportunistic against Bradley, but was pretty invisible against Penn State save for some easy shots that were missed. Morgan needs to improve -- Blake McLimans isn't ready to shoulder much playing time at the five. Trey Burke didn't shoot well, but he made a couple of big plays early and played well otherwise throughout the game. We'll take that for a freshman point guard in the Big Ten. Zack Novak hasn't been shooting as well as he had been a few weeks ago, but he's still chipping in around eight or nine points and five or six rebounds per game. Evan Smotrycz might need to shoulder some of the time at the five, so staying out of foul trouble will be very important for him. He's definitely a much rebounder than he was a year ago and his defense has been much improved, so he can do it. Stu Douglass didn't shoot particularly well last night, but he's been taking much better shots and hasn't been doing too much on offense. Douglass is still the best defender on the team.

All in all, this game doesn't mean that much for Michigan. Getting out and beating a lesser opponent was a good way to start Big Ten play, but Minnesota brings a much tougher test on a short turnaround for Michigan in Ann Arbor. Hopefully Hardaway can build on this performance and start taking over games like he's capable of doing.