In its first home game in over two weeks, Michigan put together a complete game and cruised to a late 20 point lead before Iowa State added some window-dressing at the end. It was a collective effort across the board; Tim Hardaway Jr tallied 19 points, Jordan Morgan added 16, Trey Burke had 13, and Zack Novak almost got a double-double with 8 points and 11 rebounds. Michigan got off to a slow start as both teams shoot poorly, but Michigan used a strong inside presence to pull away from the Cyclones and put the game out of reach midway through the second half. Late turnovers and surprisingly good shooting from Iowa State made the end of the game interesting, but Michigan made its free throws to forestall any potential comeback.

Michigan won this game because of superior shooting, but once again, it wasn't because of three point shooting. Neither team shot above 30% from behind the arc, and Michigan made a grand total of one three point basket in the entire second half. No, it was Michigan's stellar inside play that was the most effective: the Wolverines shot 20-27 (74%) on two point field goals. Jordan Morgan and Tim Hardaway had the biggest impact -- 7-10 and 4-5 on two pointers respectively. Michigan's currently leading the nation in two point shooting percentage, and this isn't that unusual for a Beilein team. Michigan was 24th nationally last year and Beilein's best West Virginia squad was seventh. The run that sparked the stretch for Michigan to pull away from ISU came near the end of the second half as Eso Akunne nailed a big three pointer on a nice read, Hardaway threw down a dunk off of a steal, Blake McLimans converted a good pick-and-roll, Trey hit a three, and McLimans stepped out and made a three over an apathetic Royce White. Michigan used this 13-2 run to create a nine point halftime lead and wasn't seriously threatened after that.

This was probably Michigan's toughest non-conference test until Big Ten play starts, and the Wolverines should be heavy favorites until they take a trip to Bloomington in January. Iowa State didn't play particularly well -- Chris Babb was 1-10 from three -- but Royce White is a very good player and Iowa State has a lot of talent across the board. (As a side note: How unlucky is Minnesota? Royce White transferred and is doing exceedingly well at Iowa State, Devoe Joseph is doing the same at Oregon, and their best player, Trevor Mbakwe, is out for the year. Ouch.) Michigan couldn't afford to drop this one, and they didn't. The Wolverines travel down to Auburn Hills to face Oakland on Saturday.

Tempo-free graphs after the jump... 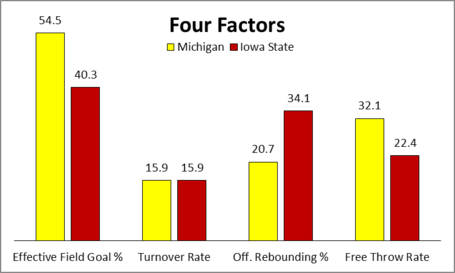 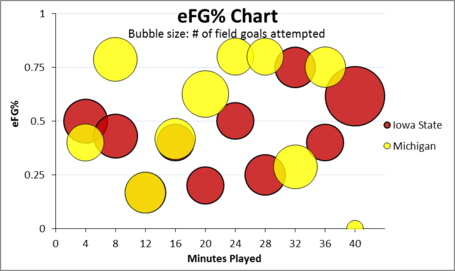 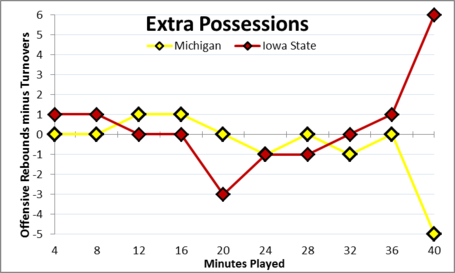