Last year, Oakland might have had one of the best seasons in program history. They only lost one conference game, finished with 25 wins, beat a major-conference tournament team on the road (Tennessee, pictured above), and had its star player, Keith Benson, go in the NBA Draft. Their season ended as a 13-seed in the first second round of the NCAA Tournament as Oakland fell to Texas 85-81. Benson and Reggie Hamilton paired up to be a lethal one-two combination for the Grizzlies, as each player averaged 17 points and each posted an efficient offensive rating of 115. Will Hudson, Travis Bader and Larry Wright were also solid contributors; Hudson was an effective big man opposite of Benson and Bader and Wright each averaged around ten points per game. Only Hamilton and Bader return of those five players.

Michigan faced Oakland a year ago in Ann Arbor, and it wasn't close as Michigan won by a comfortable 69-51 margin. The Wolverines managed to contain Benson to 11 points, but Hamilton hit 6 of 14 on three point attempts and gashed Michigan for 23. Darius Morris led Michigan with 18 points, Zack Novak had a double-double with 13 and 12, and Jordan Morgan killed Oakland on the boards with 11 rebounds, 5 offensive, in just 18 minutes. Michigan won this game by forcing Oakland to a remarkably low effective field goal percentage of 35 (and if Reggie Hamilton wasn't hitting, Michigan would have run them out of the gym), and the Wolverines did a good job of keeping Benson and Hudson off of the offensive glass.

Oakland has a very different team this year. Hamilton is now the star of this team -- he scored 35 points in a big home win over Tennessee (yes, the Vols lost to OU two years in a row... yikes) -- but he doesn't have as much help as he did a year ago. Bader is still around as Oakland's outside shooting specialist and he's averaging an efficient 15 points per game. Two new faces are making an impact for the Golden Grizzlies as well; former Wolverine Laval Lucas-Perry is Oakland's sixth man, and he's interestingly getting to the free throw line a lot (which is something he didn't do very well when he was donning a Michigan uniform), and redshirt freshman forward Corey Petros is filling the void left by Benson and Hudson. 6'5" forward Drew Valentine rounds out Oakland's primary rotation. The Golden Grizzlies are currently 6-3 with road losses to Alabama (17 KenPom), Arkansas (73) and a home loss on Wednesday to Ohio (87), and their best win was against Tennessee at home (90). 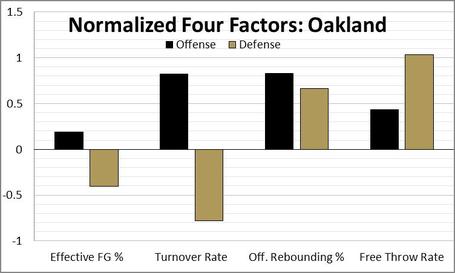 Oakland is a strong team offensively, not so much on defense. The Grizzlies excel at generating extra possessions by not turning the ball over and their fair share of offensive boards (Petros has a solid 14.1 offensive rebounding percentage). Indeed, this is the key to Oakland's success; in the games they lost, they posted the worst offensive rebounding percentage (against Alabama) and two worst turnover rates of the season (against Arkansas and Ohio). The key to the game for Michigan when Oakland is on offense is to limit these extra possessions by forcing turnovers and rebounding Oakland's misses. Hamilton will get his and Michigan needs to contain he and Lucas-Perry from getting to the line, but they need to prevent second chances. On defense, Oakland doesn't force turnovers well and has a very poor interior field goal defense: the Golden Grizzlies cannot challenge shots very well and have one of the worst block rates in the country. Jordan Morgan should build on his solid outing against an overmatched Iowa State front line with an even better one against Oakland; the Grizzlies simply aren't very good inside. Oakland likes to get out and run -- the have the fifth highest tempo in the country -- but Michigan can play fast and did well against Memphis this year and Oakland last year.

This is Michigan's toughest test until Big Ten play starts, and this isn't a gimmie by any means. After all, Oakland took Michigan State down to the wire last year in the Palace a year ago. Still, Michigan is a heavy favorite on paper, beat a better Oakland team by 18 last year, and should be able to exploit the Golden Grizzlies' weaknesses well. Weirder things have happened, but I'm predicting a comfortable win over Oakland.