Share All sharing options for: The Brewskis: Michigan downs Northwestern, 75-66

General rejoicing abound! Michigan's got a cool little B10 winning streak going heading into this week's Revenge Tour rematch against the Hoosiers. For a bit more of a recap (heavy on the optimism) check out Dave's piece here for more. Spoilers: Jordan Morgan, man. Wooh. Let's get awardin' after the jump.

Jordan Morgan. An easy choice. 27 points on 11/13 shooting from the field, he provided Michigan with a consistent inside presence. This game was as much about when Michigan could count on him down low as the fact that yes, he scored almost at will. Bold prediction the rest of the way: This team will go how Jordan goes. And he's heating up at just the right time to make the last few weeks of the (hopefully regular) season interesting.

The Keepin' it Clean Award -

The Michigan team. After having something like 22 fouls against Ohio State, the team had 13 last night in a much cleaner defensive effort. Squeaky.

This Brewski's For You - Commenter of the Week Award

Kudos to ZNell for posting this (hopefully all the way from Taiwan!)

But wait - stay tuned for more on this story...

I don't know about you, but I like giving myself awards. So this one goes out to our very own Maize n Brew website for growing an INDISPUTABLY GLOBAL FANBASE in exotic places like Argentina, Taiwan, London, Germany, and Muncie, Indiana.

The Jekyll and Hyde Award -

b) Showing some heart in a hell of a game against a team that basically demolished them a few weeks ago on the road. Road wins matter, sure, but in the Big Ten, first and foremost, you have to lock up your home court.

Jordan Morgan. The star of the Brewskis (an award he will cherish forever, no doubt) keyed the Wolverines with a slick block and then finished on the other end with a slick layup. Then that alley-oop was gravy.

The Not Really Manny Harris Award -

Tim Hardaway Jr. In an aborted draft of the Brewskis the other night, I ripped into him for some stupid shot selection in the OSU loss. But I saw something Wednesday night - he passed up an open three to feed a teammate. I was shocked and pleasantly encouraged. Keep it up, Timmy. Besides, how's Manny doing these days?

You keep fucking that chicken. More later in the show.

The Freedom of Religion, Speech, and Fandom Award -

Like I said, I love giving us awards - Maize n Brew. We've had some relatively civil discusion the last few weeks in what I remember as the most divisive time in Michigan sports. Hopefully we'll right the ship soon, but until we do, keep on talkin', because this site has benefitted enormously from all your differing opinions, like Dave's 157-comment firebomb and Zach's response. Hell, even Brian wishes he were us. Confusion and envy are basically the same.

D-Mo and... J-mo? Sure, that alley-oop was awesome. But Morris and Morgan both needed each other last night. Morris had assists on something like five of Morgan's buckets. This is a good sign for M moving forward.

John Beilein. He danced with the ones that brung him, meaning that Vogrich, Smotrycz, and Horford played for roughly 15 minutes combined after not showing that they can contribute consistently - kudos to Beilein for riding Morgan's hot hand all night. That said, Evan played well in his few minutes even though as UMHoops points out he was absolutely wrecked by Shuma in the Evanston leg of this one. The kids are still young, and they'll grow up quick. But Beilein stuck to the formula that's won Michigan 15 games this season.

The Other Jekyll and Hyde Award -

Jon Shuma. 7 points. The reason for this? Zach Novak. Who else did we expect to have a huge game shutting down their best player? After Shuma ran all over a freshman Smotyrcz, Beilein stuck Novak to him and Zach shut his ass down. Huge, huge reason for Michigan's victory.

The Streak For The Cash Award -

Via nba.com: I love, love, love LeBron for what he did to the state of Ohio with the Decision. 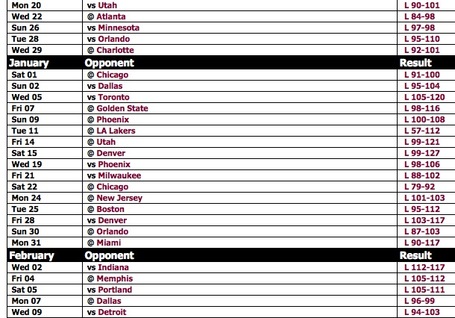 Cleveland: Making the rudderless Pistons look good. Like I said. You show that chicken. But maybe the Wizards can gift them a win this weekend.

Darius Morris. After having a nice game, he stopped the world with this tweet:

Please stay in class. If need be I'll fly to Ann Arbor and personally be a crossing guard.