In the last five years we've seen a legend retire, the Spanish Inquisition, a sure fire hire flop, and a guy I never thought would be coach not only get the job but win me over. We've seen way too much Tommy Amaker and no where near enough John Beilein. We've seen renovations, COLVERFIELDTRON, practice facilities, and a new athletic director. There've been coaching searches, coaching changes, coaches losing their minds.

Most importantly, here at least, we've welcomed new friends. My thanks to Beaudord, SCM, Kyle McCann't, Remember Bo, Zach Travis, Markus, Magnus Thunder, and everyone who's contributed over the last five years. It took us four years to hit 1 million visitors and 7 months to hit two million. Now we're well over two million visitiors (crossed that threshold in January) and well on our way to even more. We've seen an explosion in comments and insightful discussion. And I can't thank you guys enough, all of you from readers to contributors, for showing up in the first place. The fact that you keep coming back, well... thank you. Hard to believe it started out five years ago with this:

Well. I guess I'm doing this too. Welcome to the Maize n Brew. A little blog about the random ravings of a Michigan grad living happily in the Second City. As time goes on you'll learn that there are only a few subjects that'll be discussed. First and foremost, Michigan Football and Beer. The two seem to be interlinked and take up way too of my free time. Other subjects will include Michigan Hockey, a little Michigan Basketball (but only around tourney time), and the Chicago Cubs and Blackhawks. The wife's a Notre Dame grad, so occasionally I'll ramble on about going to ND games, drinking heavily and making fun of the people I see there. You'll find I don't post with the regularity of my far more distinguished counterparts and that my insight is far less indepth. But, at a minimum, at least it'll make you laugh.

More soon. Thanks for dropping in...

Little did I know how much more there would be or how much that initial mission statement would change. It's been a hell of a ride so far. Thanks for making it happen. 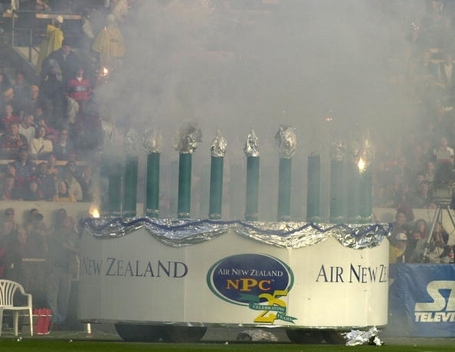