Share All sharing options for: Schools We'll Be Pulling For In The 2011 NCAA Men's Basketball Tournament 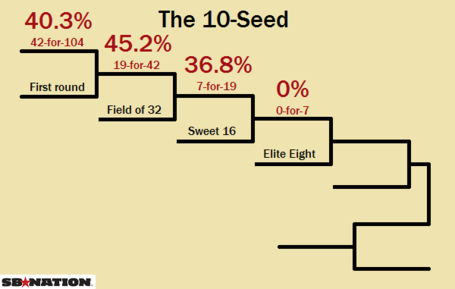 A 10 Seed's chances of advancing, broken down by seeding. Via: SBN

Unless your team is a one or two seed, 90% of fans with teams in the NCAA Tournament are simply hoping for a good showing from their school. Sure, we Michigan fans are a fairly confident bunch, what with strong showings against Kansas and That School Down South under out belt. But we're not blind to the bracket as a whole and recognize that there are teams in other regions (and even in our own) that we may have a vested or not-so-vested rooting interest in.

Here at Maize n Brew  we've got some favorites outside our region that we're pulling for. One of the great things about being a blogger and writing as long as we have is that we've learned a lot about many other school's traditions and fanbases. As a result we've made some great friends and now have some schools that we cheer for pretty regularly when they're not playing Michigan. If you're looking for some schools to cheer for other than Michigan let this be your rooting guide for the 2011 NCAA Tournament.

The UCLA Bruins - We've been buddies with the guys over at Bruins Nation for years and we always pull for the Bruins to do well when they're not playing Michigan. I know this will sound strange to some people, but I've always kinda thought of UCLA as a similar school to Michigan. Similar color schemes. Similar academic requirements and reputations. Similar obsessive compulsive fanbases. Their fans are a lot like Michigan fans and their students are too dissimilar either. They're a fellow high end public institution, and they've got one of the best school specific websites on the net. I doubt you'll ever find a better researched or better written site on the web that covers everything from Football to women's soccer as clearly and passionately as they do. You might also have heard of their success at playing basketball over the years. And speaking of which, this is a talented ball club. They're not world beaters by any stretch, but they're good enough to reach the Sweet 16. Cheer 'em on.

The Texas Longhorns - This is more a personal thing than a Maize n Brew thing. Going to high school in Texas, I always pulled for the Horns. This despite being surrounded by Aggies, I was rooted for Texas. Years back an old friend was a walk on forward. So there are plenty of personal reasons to pull for the Horns. But there's also a blog specific reason, Burnt Orange Nation. One of the original SBN super sites, Peter Bean and the group over at BON continue to pump out great content on just about every collegiate sport. Gratefully, even with Texas' run of success, they remain self deprecatory and funny. Certainly when you've been winning that long the overwhelming temptation should be for them to become d-bags, shouldn't it? Instead, they remain a sea of sanity and good humor inside the Texas border. The rest of the BXII is welcome to disagree with me on that point, but BON's an old favorite of mine. So I've gotta cheer for the Horns. At least until they meet Michigan in the Sweet 16.

The Georgia Bulldogs - Until I started blogging I had absolutely no knowledge of Georgia football or Georgia anything. Now I can't help but pull for the Dawgs every Saturday, want a bulldog puppy, and check out Dawg Sports every morning to see what the Mayor T. Kyle King and his posse have cooked up. Kyle's long been known for his verbose style and his belief that the phrase "a picture is worth 1,000 words" is really just a challenge. I've learned to hate Auburn (though to be fair Auburn had a lot to do with that too), the extolled glories of Chick-fil-A, and come to believe that a home and home with Georgia would be the greatest thing since fire was discovered. Now the Dawgs are in NCAA tournament when many thought there was no chance of this happening in thiscentury. I'm banking that if they advance, the opus Kyle pens will be well worth the wait.

The Purdue Boilermakers - What? Purude? Iowa's most hated rival!? Yeah. I'm rootig for Purdue. This really doesn't have anything to do with the Purdue team (though I do think they're pretty darn good). I'm just a big fan of TMill's work over at Hammer and Rails. How anyone can suffer through Purdue football, then lose Robbie Hummel TWICE to season ending injuries, and still maintain a positive outlook on life and college athletics is beyond me. But it's worthy of praise. The only thing that worries me is the manner in which Purdue closed the season. Two bad losses have me nervous, but I'm hoping for the Big Ten and TMill's sake that they right the ship. I'm hoping to do my part by cheering them on.

The Kentucky Wildcats - This one might be a bit of a head scratcher given my distaste for Kentucky's head coach John Calipari, but I'm pulling for Kentucky anyway. Calipari's presence may be an anchor on my support, but I can't not pull for a school that spawned A Sea of Blue. A Sea of Blue is the alpha dog of the SEC basketball blogs. A loud, eloquent voice of sanity amidst a roar of "WWWWWWOOOOOOOOO SEC RAWKZ!" Glenn and his crew are outstanding and a must read for any basketball fan. Oh, and any Kentucky game comes with a free Ashley Judd appearance, which, let's be honest, is quite nice. An embarrassment of riches, really.

Other Schools to Root For If You're Bored:

The Michigan St. Spartans - Calm down, I know none of you are pulling for the Spartans without a really good reason. So I'm here to offer one. My deep respect for the guys over at The Only Colors. TOC is one of the best basketball blogs on the web and their writing and analysis are stellar and level headed; a true feat when you consider it's impossible to say that about the Spartan's fan base in general. This does put me in a bit of a quandary as they're playing UCLA, but them's the breaks. Had the matchup been diferent, I'd honestly be pulling for Michigan St. Spartans to win because it means more great writing out of TOC. Even so, I'm pulling for UCLA for the reasons stated above. But should MSU advance we'll get some great stuff out of TOC.

The Georgetown Hoyas - This is strictly for our buddy Remember Bo. Well. That's not entirely true. Georgetown gave us the awesome Hoyas blog The Casual Hoya which is a gold mine for Big East basketball insight and humor.

So there you have it. A rooting guide for the 2011 NCAA Tournament based on my own personal biases and the quality of those team's outstanding blogs. And if you're going to cheer for anything, shouldn't it be for good writing?