Get to Know Michigan Baseball

Share All sharing options for: Get to Know Michigan Baseball 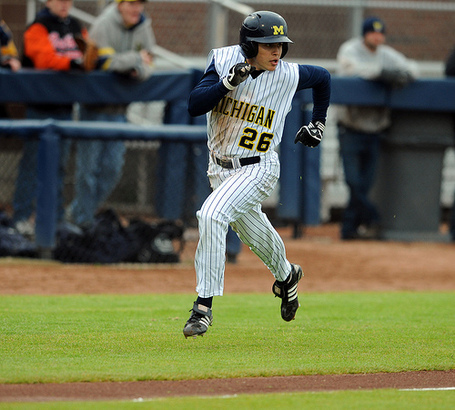 Michigan has never been a power in the world of NCAA baseball, where dominant teams in the Mid-Atlantic States, Texas, and the Pacific Coast dominate the sport.  They've gained some momentum of late, however, after they grabbed an improbable 2-seed during the 2008 college playoffs, eventually being eliminated by Kentucky.  That year, they were ranked #18 in the nation, the highest they've been in recent memory.

This year Michigan starts the season picked 2nd in the conference by the coaches.  Minnesota is picked to win the conference, with Indiana, MSU, Iowa, and Ohio State rounding out the top six.  A trio of Sophomores were picked as "players to watch" as well - OF Patrick Biondi, SP Bobby Brosnahan, and SS Derek Dennis.  Biondi was named a Freshman All American after his campaign last year saw him set Michigan freshman records in both stolen bases (29) and runs scored (69).  All three were named to the Big-Ten Freshman All Conference team from last year.

Things have been rough so far this year, as the Wolverines have had real trouble generating offense.  Michigan entered the season with a real opportunity to win the opening weekend February 18th against Louisville, St. Johns, and Uconn in the Big Ten/Big East Challenge and likely find themselves back in the rankings for the first time since the 2008 campaign.  Unfortunately they dropped all three games, and find themselves increasingly frustrated:

There's no other way to say it... the weekend quickly went from disappointment to frustration. We didn't end up on the winning end in any of our first three games, but on top of that, we got stuck in Nashville, Tenn., due to the great weather that we get in the Detroit area. 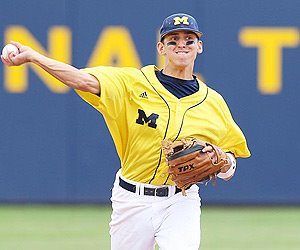 That's Senior Captain 2B Anthony Toth.  He did remain positive:

Despite not coming up victorious this weekend, there were a lot of positive signs to be noticed. For starters, we hit the ball really well even though sometimes the center-fielder of the opposing team didn't have to move to catch it. But hey, that's baseball. We also saw some pitchers compete in a very positive way. With such a young team we're going to need guys to step up who haven't experienced success in the past... and this weekend some guys showed that they were capable of doing so.

Sometimes you hit it really well, right to other team.  The team has thus far been unable to turn the corner, however, dropping all three games against Rutgers this past weekend.  When you look at the post-series notes, it's clear that youth is going to be a continued issue of this team.  There were numerous errors in the field and some wild pitches that allowed Rutgers to score; the Scarlet Knights did not return the favor.  Offensively, the team is batting just .270 compared to their opponent's aggregate average of .350.

It appears, at least from the start of this season, that Michigan is going to have to figure out a way to generate offense, because their defense and pitching is not going to be what wins them games.  Collectively, the Wolverines pitching staff has an ERA of 6.92 compared to their opponents 3.50.  Even when the pitching is working - as it was against the Mets in an exhibition game - the defense is very suspect.  Michigan lost that game 7-1 while only allowing 1 earned run.

They're back in action tonight against Florida Gulf Coast, where they'll look to get this thing back on the rails.  Michigan is 0-6 for the first time since going 0-8 in 1996.  The talent that led them to be picked 2nd in the conference is still there - they're just out of sync right now.  Hopefully as they get out of the heavy travel portion of their schedule, and into conference play, they'll be able to put it all together.  Here's the BTN Schedule for Michigan Baseball:

Unfortunately there isn't much to say right now except that you hope that they get out of this slump and pull it together.  The season is still very young, and the Big Ten season and Tournament are still realistic goals for this squad, who should improve dramatically as they get more games under their belts.