Stuff You Should Read/See Right Now

Why Dhani? Why? - This come to us courtesy of reader JR who let us know that when Dhani Jones is not hosting Mock Rock, traveling the globe, hosting his own TV show, or making bow ties he is traveling around in a van smelling your stuff. While I have no problem with a large, fro'd man wearing a bow tie coming up to me and smelling my athletic gear, that's because... well... it's personal. /cries/  Anyway, Dhani has teamed up with Febreeze and some hot women to peddle their new spray. Dhani Tackles Your Funk. Enjoy/Cringe.

On a Lighter Note, Kellen Russell Win the 141-Pound Wrestling National Title - Get it, lighter? Never mind... Michigan's junior wrestling captain Kellen Russell capped off a perfect 38-0 season by defeating Cal Poly's Boris Novachkov 3-2 to win the 2011 men's wrestling 141-pound national championship. Kellen is the 15th a Michigan Wrestler to capture a national title and his title makes 21 total individual championships for the Wrestling Wolverines. Hat's off to Kellen, congratulations and Go Blue.

Women's Gymnastics Kicks Butt As Well - The Women's gymastics team captured it's 5th straight Big Ten title this weekend. The Lady Wolverines edged out rivals Penn State and Illinois by less than a point to capture the all around title. Their reward for this is a No. 2 seed, a No. 9 National ranking heading into the NCAA tournament, and the right to host a regional. The NCAA selection committee announced Michigan will host No. 4 (seeded) Stanford, No. 16 Ohio State, No. 21 Iowa State, No. 23 Minnesota and No. 24 Kent State for the NCAA Ann Arbor Regional Championships on Saturday, April 2, at 6 p.m. in Crisler Arena. Tickets are on sale now by calling 1-866-296-MTIX (6849) or visiting MGoBlue.com/tickets. If you're in town, head out and support the team.

The Hockey Regional of Death - The Michigan Hockey team received some good news and some bad news over the weekend. The good news was that they received a two seed in the Men's NCAA Hockey Tournament. The bad news was that they're in the same regional as No. 3 overall Boston College. Actually, that's not the bad news. The bad news is that they have to go to St. Louis for their regional. Blech. Anyway, the Eagles have been destroying fools all season (30-7-1 on the year) and are arguably the best, most complete team in the country. Then, in the event Michigan makes it to the Frozen Four, they'll likely meet No. 2 overall seed North Dakota. So... yeah. Great. Your bracket is below. Michigan's first round match-up is against Nebraska Omaha. The Wolverines split two meetings with the Mavericks this season, 2-4 and 6-1. Your NCAA Ice Hockey Bracket is below: 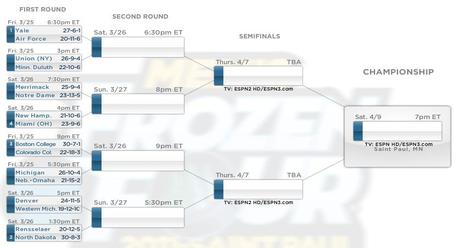 Plenty of Reasons To Be Excited About 2011-2012 - Mike Rothstein pens a nice article on the end of the 2010-2011 season and gives us plenty of reasons to get excited about 2011-2012. All the obvious things are stated as well as some intangibles. Michigan doesn't lose anyone. The team will be a year older and more experienced. There's plenty of hunger. But, as Terry Foster points out, Michigan isn't going to be sneaking up on anyone next year. Next year the Wolverines are going to come into the conference season and be expected to compete for the conference title and a much higher seed in the NCAA championship. Whether all that comes to pass or not is up in the air, but this team gave us a lot to be hopeful for.

Spring Practice Has Begun! - Oh thank God. This also means the return of Michigan Rewind and our man Doug Karsch filling us in on all the latest practice news that makes it through the UM censors. The Spring Game will be April 16, at noon in Michigan Stadium.

They're Really, Really Good - The Softball team continues it's winning ways this season. Already a mind bending 29-2 overall, the Wolverines are getting ready to crack open the conference schedule against Northwestern this weekend in Evanston. Currently ranked No. 4 in the country, the Wolverines look primed for another long run in the NCAA College World Series.