Share All sharing options for: Monochrome: When Michigan Wore White 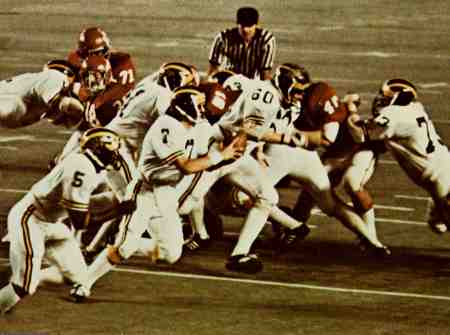 Ah spring.  When practices start, speculation blooms, and people start talking about things like white pants with fervor usually reserved for mid-October.  It's a tradition as old as...well...a very old tradition.  The catalyst for this year's version, a video from spring practice featuring white pants, was explained in the very same video as being some sample pants sent by Adidas that just happen to be white.  Michigan will be wearing different styled pants this year - still maize - but in order to get used to them while they wait for the maize ones, Adidas was kind enough to send white samples.

BUT it did get people talking, and me thinking back to when Michigan actually did wear white pants with their away uniforms.  Michigan wore white pants for two seasons, 1974 and 1975, under coach Bo Schembechler.  During the 1974 season, Michigan went 10-1, with their only loss to Ohio State at the end of the season.  The white pants suffered their only loss of the season during that game.  Michigan did not end up going to a bowl game.  In 1975, Michigan went  8-2-2, with ties in the preseason against Stanford and Baylor.  The White Pants would ultimately go undefeated until the Orange Bowl, where the above picture was taken, when they fell to Oklahoma 14-6.

It was here the the rumors started: could the White Pants win the big game?  Sure, during the regular season they would stomp people right in their own living room, but with the season on the line, first against Ohio State, then against Oklahoma, they never did get it done.  Coach Bo Schembechler finally made the decision to move on from the white pants, saying "if Maize Pants can get it done at home, they can get it done on the road too."  White Pants was fired, and has not been heard from since. That last paragraph is 100% accurate.  I was there.

But seriously, Michigan has the best uniforms in all of sports, and that's science.  However, they have shown a propensity for tinkering with the away iterations of that uniform in the past, from the Nike "piping" debacle to the most current edition you see below. 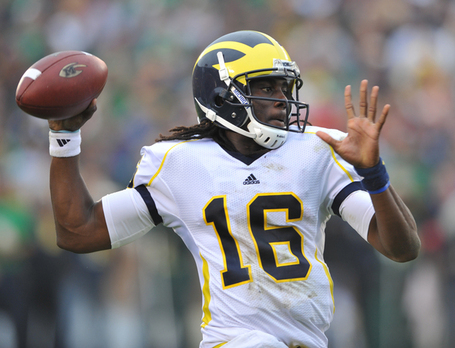 Compare that with the 1997 away uni's after the jump!: 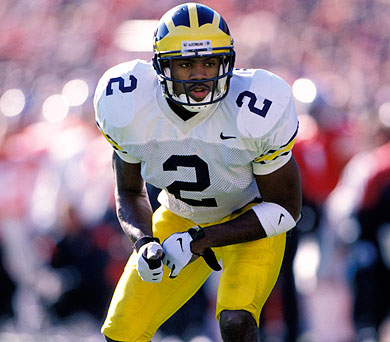 As you can see, the changes - while on a year-to-year basis have not been too substantial - have actually been quite significant over the past decade or so.  The armbands have gone to the wayside, and the yellow panels have been added, taking over from the piping which represented the last major change: 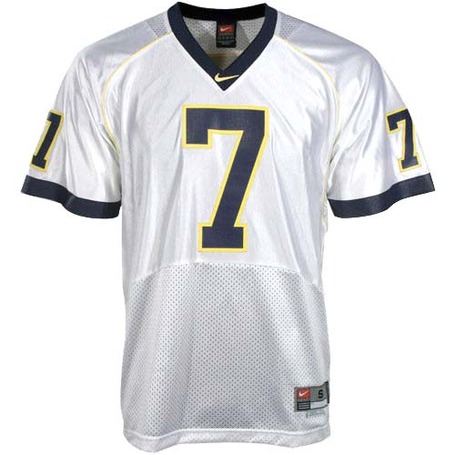 The changes, however, have remained on the insignificant side when you look at what Nike has done at Virginia Tech, Florida, or most recently Ohio State.  A change to white pants would represent a serious change, but one that is not without precedent.  Most recently, there was message board chatter of Michigan bringing out the white pants against Iowa last year.  Reader Ouck Fhio (I see what you did there...) has pointed out a recent photoshop of what white game-pants might look like, incorporating the new yellow panels that Adidas has given us: 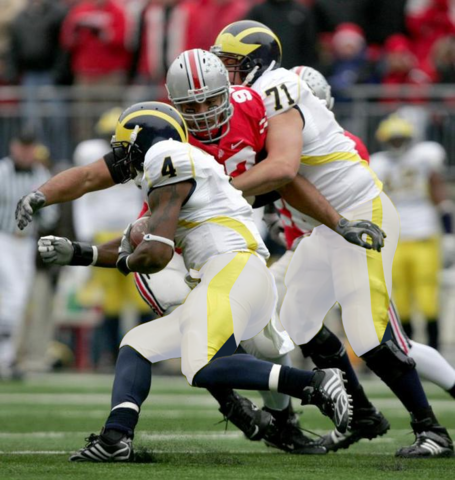 I love how whoever picked this picture to 'shop picked a picture featuring a blatant hold on 71 there.  It was most likely called, since that's the way these past few years have gone.  Either way, the white pants actually look...kind of cool?  I don't know, I'm torn on the subject.  While I think that the Texas and PSU away's, featuring white on white, both are amongst the best in CFB, I'm just not sure that Michigan can pull it off.  White on white looks best when it's truly white on white, and I'm afraid that the maize paneling combined with the blue helmets and numbers looks a little...off.  I'd much rather see an iteration where the panels, piping, and numbers are blue and the only maize on the uniform is in the wings of the helmet.

My final verdict: Don't touch the home's, but if they wanted to try something new with the away's then they should go for it.  We're never going to be Oregon (thank god for that), but I don't think I'd mind too much if Michigan tried a white-on-white look for away games, if only to see it.  But for the love of god let the home's be.