Your Friday Drinking Instructions Encourage You to Drink and Dance

Share All sharing options for: Your Friday Drinking Instructions Encourage You to Drink and Dance

We've already had a deluge of posts recapping Michigan's glorious and improbable run to the second/third round of the NCAA Tournament.  I'd just like to add my voice to the chorus for just a second and say exactly how proud I am of Tim Hardaway Jr., Darius Morris, Zack Novak, and every other player on the Michigan team.  Coach Beilein did an amazing job in turning around a 1-6 Big Ten start, taking a young, young, young team farther than anyone thought possible.  I've heard a lot of people saying "If Morris' shot hadn't clanked off the back rim, think what would have happened..." but honestly, even after a heartbreaker, I'm totally okay with how this team ended its season.  It was a fun run, one that these kids will remember for the rest of their lives.  For my part, this team will go down as my favorite Michigan team of all time, at least until next year's scrappy bunch wins it all.  (HT to Bacari Alexander for the black socks-shoes combo, because we all know it was him.)  Good work boys, I'm really, really F'ing proud.

Life goes on in the tournament, but not for Duke.  (I was going to link to the Duke SB nation page, but it doesn't appear they have one.  This is why they lost, not some jinx)  By the tournament, I mean the real one, not this one, you know, the one everyone thought Michigan would scrape into.  Anyway, do check out the second half of Arizona's surprising upset - they went on a very Michigan-versus-Tennessee run in the second half, outscoring Duke something like 55-33.  Oh well, we're all happy Duke's out, right?

For every team everyone hates, there's generally one that everyone loves, and this year there are plenty to choose from.  Except for me as a Georgetown homer, everyone seems to like VCU, and some other team from Richmond seems to be doing well.  My favorite cinderella team?  Butler.  Don't care that they went to the championship game last year.  They lost their best player to the NBA and just went about their business with another babyfaced assassin, Matt Howard, leading them to upsets of Duke and Wisconsin.  They're my pick to go to the Final Four from the insanely weak whatever-it-is bracket in the bottom right of my SBN sheet.

A couple of fun teams lost yesterday, those being Steve Fisher's SDSU bunch and the Cougars of BYU, who were a fun group to watch play basketball until they kicked one of their best players off the team for, you know, being a normal human being.  I vehemently disagree with this SI article - regardless of how you feel about BYU's incredibly stringent honor code, I'm of the opinion that kicking Davies off the team seriously crippled their chances at a deep tournament run (echoed in the article linked above), and therefore punished the rest of the team unfairly.  As for SDSU, best of luck to Steve Fisher.  He's got a great thing going over there, and he'll always be a kickass coach in my mind.

This is all well and good, you say, but where's the beef?  The answer, of course, is that the beef is a beer.  And your beer for watching Friday's games is a nice, springy beer from Warren's own Kuhnhenn Brewery, the Loonie Kuhnie. Go get one. 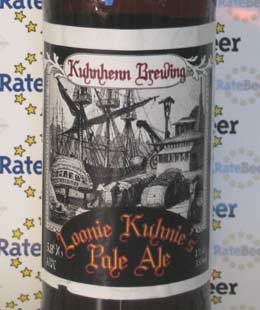 Not much of a pale ale guy myself, but this has a real nice citrusy finish to it.  It's kind of like those college freshmen who say they love Blue Moon because they're trying to be classy, then put five oranges in it to dull the taste of beer.  On second thought, it's nothing like that.  It's a well-balanced hoppy beer with a light hint of orange and lemon.  A tad bitter, but balanced nicely with a caramel finish.  If you've got the time, go check out the other beers from Kuhnhenn's, which all look awesome, and have tested very well in world beer competitions.

Now that you've got your beer, who should you root for tonight?  Obviously, Kentucky should be your strongest rooting interest, but don't put too much faith in that one, because Sullinger is going to destroy the Wildcats inside.  Perhaps a Shaq-style defense would work best - let Sully score his points and lock down Lighty and whoever else that School Down South has on their team.  Go 'Cats!  Richmond also plays a #1 seed, Kansas, so I'll root hard without much faith for them Spiders as well.  The most (or least) entertaining game will probably be VCU/Florida State, a defensive battle waiting to happen between two surprisingly low seeds.  I like VCU in this one, but I'll be pulling hard for FSU to avenge my Hoyas... Anyway, enjoy your basketball and your beer.  March is very much upon us - it's 60 and sunny where I'm writing this, so I'm certainly enjoying myself.

Until next time - Cheers, Michigan Faithful!