Darius Morris to Test NBA; Will Not Hire Agent

Share All sharing options for: Darius Morris to Test NBA; Will Not Hire Agent

Darius Morris, who has been staunch to this point in his desire to return to the University of Michigan, will indeed test the NBA draft waters.  He has until May 6th to formally declare, but will not hire an agent. He will go through the process as if he were going to enter the draft, and then decide based off his projections whether to return for his Junior season.

While the headline might be scary, this is nothing that was unexpected, nor does it necessarily represent a shift in what Morris might do.  Morris will not hire an agent, meaning that he can retain his amateur status and return to Michigan should his projections not be high.  For those unaware, a basketball player can declare for the draft while not hiring an agent.  By doing so, they get their name thrown into the mix and can see where projections have them being picked.  Additionally, there are services that can advise the player on what they need to improve, or where they might end up the following season.  Should the advice and projections not be where the player wants to be, he can withdraw from the draft and return to campus.  What would imply a major shift is if Morris hired an agent, which would destroy his amateur status and force him to enter the draft.

Early projections have Morris going in the early 2nd round, which probably means that he would stick around for his Junior season.  In the NBA, the 2nd round means that there are no guaranteed contracts, and with Morris' ceiling being what most agree to be considerably higher, he will likely see value in returning, improving his draft stock, and hopefully getting some of that lottery pick money next year.

Michigan coach John Beilein will hold a scheduled end-of-season press conference this afternoon at 3pm, where he is expected to address Morris' decision.  Morris was a 3rd team Big Ten selection this year, averaging 10.5 points and setting the Michigan assists record at 235 for the season.  I want to re-iterate that this move by Morris was not unexpected, and is what Morris should be doing.  If he gets the pick projection he wants, then we wish him luck in the NBA - we'll always be Darius Morris fans.  If he feels he can improve his stock drastically by returning for his Junior season, then let's make some noise in the tournament next year, and by then he'll know what the process looks like. 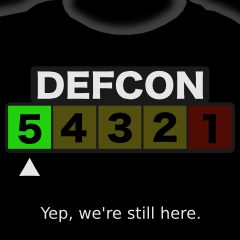 Morris DEFCON level remains unchanged; until Morris himself either hires an agent, or says explicitly that he's entering the draft, I do not believe it's time for panic.  This is more "keep an eye on it" than anything.