Share All sharing options for: Men's Swimming and Diving: Champions 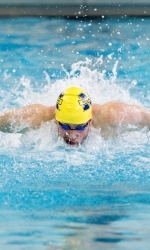 Your alarm clock is the most difficult household items to figure out.  One minute, it's sitting usefully on your nightstand happily displaying the time for all to see.  Then the next minute slips onto the display and it starts to squawk and beep and boop or play that annoying radio station that tells you that your nice warm place of sanctuary is about to be torn away and you're going to have to face the day in that wretched state of being called "awake."  If you have a job, you face this nightmare daily, probably nostalgically wishing for your college days when you could just sleep as long as you wanted and the earliest thing you had to do was the occasional 8 AM class.  You woke up at 7:55 for that class - don't kid yourself.

Now imagine the amount of dedication it takes to voluntarily give up those mornings - and the many, many nights that cause those mornings - for your college career, and go directly from the warm place of sanctuary into a cold pool to swim a 4000 yard practice.  This is the life for college swimmers.  If you've ever swam competitively, you know what it takes to do 2-a-days 6 days a week and have that be normal.  You know what it's like to be in the weight room at 5am.  You know what it's like to give up your Christmas vacation to do 12,000 yard days, looking at a dry-erase board and seeing that the next 3 hours of your life are going to suuuuuuuuck.

The dedication and sacrifice that one spends in pursuit of a goal are repaid ten-fold when that goal is reached.  The dedication and sacrifice it takes to achieve a goal in the sport of swimming are steep, but the achievement of that goal is something that define lives.  In a sport largely defined by individual performances, casual observers often mistake the team aspect.  The guys you swim with are the guys who push you every day in the pool, pick you up during a tough set, and make you come to practice in the morning when you'd rather be sleeping.  These experiences - a little closer to hazing than anybody would probably admit - build a team closer than anybody who hasn't been a part of it knows, and a personal record, or a winning individual swim is as much a reflection of that team as an individual achievement because without your teammates willing you on, you probably would have given up a long time ago.

Congratulations to the Michigan Men's Swimming and Diving team for a successful meet, and good luck to those members continuing their seasons.  35 Banners.  That's remarkable.