Hoooooooly Crap, Jim Tressel's Smoking Gun Email Exists And It's Worse Than You Could Imagine

Share All sharing options for: Hoooooooly Crap, Jim Tressel's Smoking Gun Email Exists And It's Worse Than You Could Imagine

Holy Jeebus this is bad. Jim Tressel received notification that at least one name player and several others were receiving free tatoos and bringing Ohio State merchandise to a convicted felon for his resale, via email ON APRIL 2, 2010. 610 WTVN out of Columbus has the actual email up for you to view.

I mean hoooooollllly crap. This is so far beyond anything I could've possibily imagined. He knew about the players. He knew about the merchandise. He knew that his players were involved with a convicted felon. He knew there was a federal invesitgation going on. And the guy telling him this didn't say he was a lawyer. Maybe the lawyer thing comes up later, but there's nothing here requesting confidentiality.

I've posted the sanitized version of the email that Greg from MVictors has produced below. If you want the full version go to 610 WTVN's website to view the whole thing. Quick word to the wise for the people doing the redacting... make sure you delete the entire header if you want your source to be anonymous. [Update: The header I'm referring to belongs to Doug Archie, OSU's director of compliance. I suspect, though I have no way of confirming this, that this was printed off his computer as part of OSU's internal investigation and not an indicator that he was the "concerned" source that sparked the whole thing. I should've researched that ahead of time, but didn't. My apologies to Mr. Archie, I should've labeled that before. - Dave] 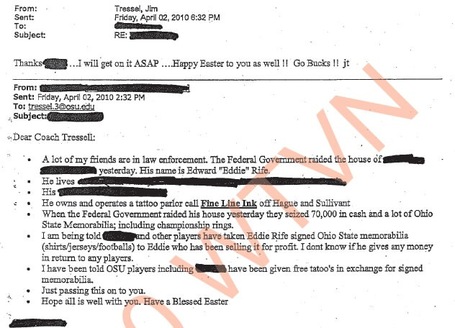