Yes, I know it's been a while.  The work week is just about done, the season is now over for Michigan's last revenue sport, MnB updating has been regrettably light, and you've probably earned a weekend rest.  Don't worry, Michigan Faithful.  I feel your pain, and encourage you to drink it away with me.  By now, your rage at what might-have-been with Michigan Hockey has subsided slightly, you're getting excited about Brady Hoke being a MAN and 40 (plus) and you're wondering which RB Michigan's going to MANBALL all over their opponents this fall.  You might have even noticed some of the newfound optimism over at MGo that we've been missing for so long.  And, of course, you need a beer.

Over the past couple weeks, we've steered you to some darker, heavier beers, but in light of all the springy weather, I thought it fitting to recommend a less heavy (but still Hoke-worthy) brew.  Your Friday Beer is none other than (possibly Dave's favorite) the Paulaner Weissbier.  'Twas a hot day on a Barcelona beach, and I needed some lunch.  My spirits soared when I saw none other than the familiar golden label staring at me from the fridge of my chosen eatery.  And by golly, I made the right choice.

And, because I truly love all of you, I decided that rather than Googling some images of Paulaner, I'd take one myself: 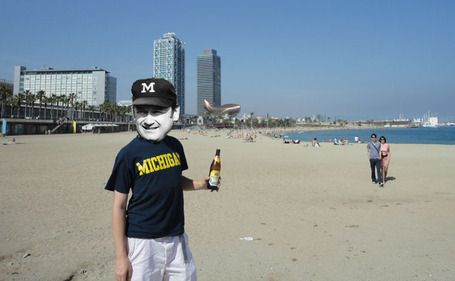 Paulaner, for those of you unfamiliar with its German goodness, is a weissbier, or wheat beer (not white!) brewed in the same location from filtered Rhine water in Munich for the past 500 or so years.  Not too hoppy, not too malty, and just heavy enough to make you feel masculine drinking it.  A well-rounded brew that goes well with fish, meat, women, football, beaches, and anything you like.  Drink one immediately.  If you can find it on tap (and I believe Metzger's in AA occasionally has it) get it in a big stein.  You won't be disappointed.

But hark!  What is this blasphemy, you say, not including a Great Lakes-area beer in a YFD?  Fear not, for I have a beer for you purists as well.  We here at MnB recognize that we can't all be sitting on beaches in far-off lands drinking fine brews.  We also recognize that the Great Lakes reason has some of the finest beers in the world (and the world tends to agree).  So, without further ado, here's a white beer that stimulates the local economy: the Great Lakes Brewing Company's own Holy Moses White Ale.  If you can't find Paulaner (and you should, it's fairly common) or want to buy American, grab a Holy Moses.  It's slightly frutier and lighter than the Paulaner, but has a very smooth finish with hints of apricot and a coriander kick.  All of these fancy flavors add up to one very delicious beer.  Very drinkable during games like Western Michigan (two), Notre Dame (four), and Ohio State (don't even count, just don't stop, responsibly, of course). 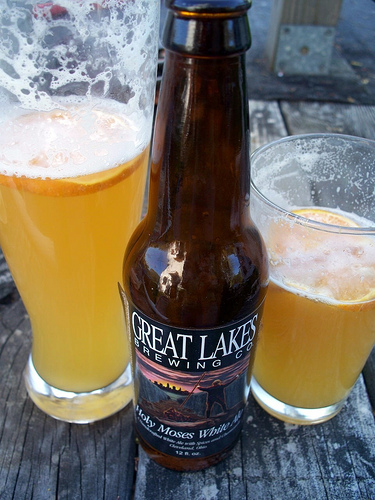 Until next time, Michigan Faithful.  Cheers!