Your Weekend Drinking Instructions are Late

Share All sharing options for: Your Weekend Drinking Instructions are Late

Forgive the tardiness of this post, for I was at a rodeo last night and didn't get around to getting something up.  Yes, you heard that right, I was at a rodeo.  To be more specific, I was at the Stockyards Championship Rodeo in Cowtown Coliseum in Fort Worth, Texas.  I had never been to a rodeo, nor had I ever really thought that I had occasion to go to one, mostly on account of my continuing to possess the entirety of my set of teeth.  I was happily, gleefully, wrong.  Ladies and gentlemen, if you've ever wanted to see a cowboy wearing a full hockey helmet and face guard get clean knocked out whilst attempting to ride a bull who has had his testicles bound as tight as a poolside Italian's then you must rectify this situation immediately. 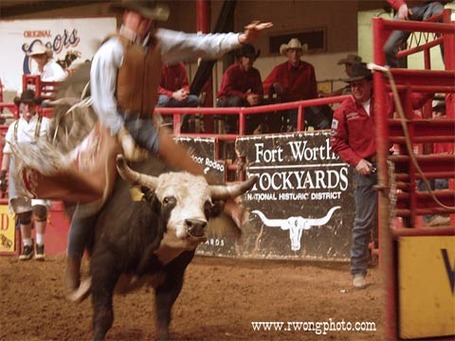 In some sports, the genesis of competition is easy to figure out.  I mean, "Hey, I bet I can run to that rock faster than you" is basically how Track started, right?  Imagine how bull riding started:

Cowboy 1:  I'm just gonna get on the back of this thing and see how it goes.

Cowboy 2:  Wait, I've got an idea - let's twist up his balls so that he jumps around a little bit first.

It says a lot about the region that gave us bull-riding that this was considered a fairly good idea at the time, and something that we should build an institution around.  Bull riding, however, is far from the only sport at the rodeo.  They have one event where they turn loose a scared to death calf, and have a cowboy ride up from behind it, rope it around the neck, get off his horse, body slam the calf to the dirt, and tie at least 3 of its legs in a manner fit to please John Marston himself.  It's quite literally the first thing that has elicited a pure "holy shit that was awesome" from yours truly in quite some time.  And don't worry if you think it sounds cruel to the calf.  It is.

Of course, the events in the ring are only half the equation, which brings me to the drinking instructions portion of this post.  Beer drinking is the other tradition at the rodeo, and in Texas it doesn't get much better than Shiner Bock: 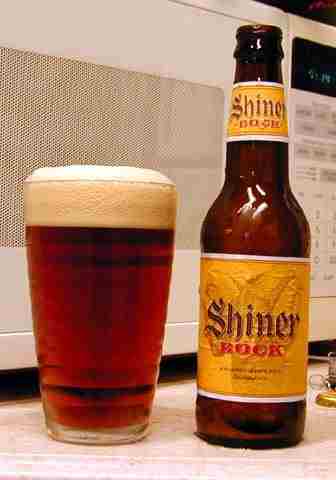 Brewed by Spoetzl Brewery in Shiner, TX, "That Little Brewery in Shiner" has been a Texas institution since it first opened its doors in 1908.  It is the oldest independent brewery in the state of Texas, and is now distributed in 41 states.  The best part of the Spoetzl story comes during prohibition, when the company stayed afloat by distributing Ice, and making a product called "near beer."  Near beer was a malt bevarage containing little to no alcohol, which was sold legally during prohibition.  However, the only way to make near beer palatable was to add alcohol back into it by way of injecting it through the cork at the top of the keg.  The result was called needle beer.  So basically, Spoetzl stayed in business by saying "we'll make it taste like beer, you do the rest."  Noted historic food critic Waverley Root described near beer as such:

...Such a wishy-washy, thin, ill-tasting, discouraging sort of slop that it might have been dreamed up by a Puritan Machiavelli with the intent of disgusting drinkers with genuine beer forever.

Thus we see the vast improvement over a shitty situation that simply adding booze can provide.  This "slop" kept an entire brewery open and in business.

So what can you do this weekend?  I recommend going out and grabbing some Shiner Bock if you're in one the the 41 states in which it's now distributed, and putting a little Texas into your life.  Who knows, maybe flip on Versus at about 1:25 AM and find some Rodeo to take in.  As Hank Hill once said, "Everyone’s a Texan. Change planes in Dallas, and you’re a Texan."