Share All sharing options for: The 40 Yard Dash, and Why It's Fake

Football, unlike, say, Track or Swimming, is a fluid game.  Well, probably not a fluid as swimming.  Never mind that last metaphor.  It's a dynamic game.  By that, I mean that judging a player's physical attributes in raw terms - i.e. how high can he jump, how fast can he run - is often a misleading exercise because nowhere in the game of football are those things measured as an actual determinant to on the field success.  Running, jumping, and generally being strong are all parts of the game, but those activities are never used in isolation once the whistle blows and the ball is snapped.

Player evaluation, therefor, is a difficult nut to crack.  On the one side, nothing beats real game footage.  On the other, fans and team evaluators alike tend to gravitate towards measurable statistics.  Being able to quantify something is important, even if it only tells one part of the story.  The problem is when these measurable statistics become the sole evaluation that is relied upon to predict future success.  Teams do it all the time - fall in love with a guy at the combine because he did X time in the 40 yard dash.

Naturally, these measurables have become inflated over the years.  An image I recently discovered in an excellent post by Dr. Saturday caught my eye: 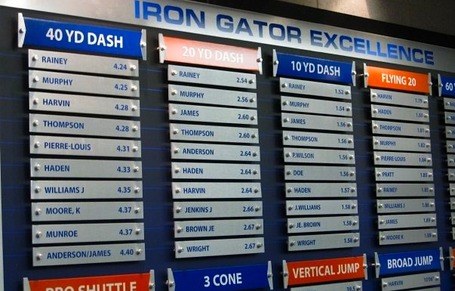 That's the Florida board for the 40 yard dash, claiming some times that are patently and obviously false. Here are the 10 fastest times run at the 2011 NFL combine, where the fastest time posted was that of DeMarcus Van Dyke, a DB out of Miami at 4.28.  The range of fastest times goes from that 4.28 to 4.43.*

The board at Florida ludicrously claims that no fewer than 5 of their players ran a faster time than those posted at the combine this year, and that board is even a few years old.  The fastest time ever recorded at the NFL combine is a 4.24 from Chris Johnson and Rondel Melendez.  This isn't a hur hur Florida is lying post, because everybody does it.  Why the descrepency in times?

For starters, when you're talking about the 40 yard dash you're talking about a very small amount of variation making a large impact.  This isn't a race that is run over the period of a number of minutes; it is timed to the hundredth of a second for a reason.  So slight variations in the way the 40 is run make a huge difference.  On a track with spikes is a lot different than on grass in flats.  Hand timed 40's are almost always ludicrously inaccurate because it takes somebody with a stopwatch hitting a button at the start and finish, and often times those holding the stop watch are coaches who anticipate the finish.  Even electronically timed 40's can be wind-aided.

Because of the cult of measurables, these times have gotten faster and faster over the years as teams rely on combines to do some of the work when it comes to player evaluations.  In reality, the 40 time means very little on the field - it's simply a measure of how fast a guy can run in a straight line, which rarely happens in an actual football game.  The 40 yard dash, like all combine measurables, should be taken as useful information, but not as the end all be all of a football player's speed or strength on the field.

*ed - this is a change because the list I used of fastest times before was filtered by DB, and even then only included the first day of running.  You would think, after blogging for 3 years or so, that I would be above such a mistake.  You would think wrong.  Thanks to reader auburn82 for correctly and politely pointing out my stupidity.  The main thrust of the article remains despite the clerical error.