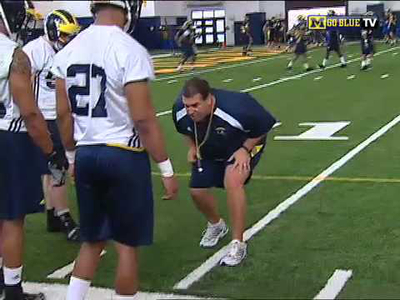 Within minutes of Butler's loss to Uconn in what was statistically the most boring championship game in history, I gave my friend SCM a call.  We're both from Indiana, and while we can't really consider ourselves Butler fans, we've both been to Hinkle enough to feel some loyalty to the hometown program that could.  About two minutes into the conversation, which consisted of "well they played like crap," our attention turned to football and it hit us that we're officially in the off season.  We get the Masters this week, and the Indy 500 in May (neither of which may be your cup of tea; understood) but the days of at least a weekly event to look forward to are over until September.  What we've left with is mostly speculation, and rare tidbits from various practices as the football team goes through their Spring auditions, as Al Borges put it recently.

A portion of Tuesday's practice was open to members of the media, and we got some pretty good information out of it, not to mention some great images from Ann Arbor.com.  Offensive Coordinator Al Borges held a press conference immediately following the practice, where he was able to shed some light on the things that Michigan's working on.

Michigan will run the shotgun and run it a lot.  Al Borges said:

"We're gonna gun more than we've ever gunned...We have more QB runs, but that aside, our offense is our offense, and we're going to gear what we do to what he's capable of doing."

While the "gun more than we've ever gunned" portion is encouraging in terms of putting Denard Robinson in an environment where he is most dangerous, I actually find the second part of that quote more encouraging.  As mgo recently pointed out, part of Rodriguez's problem was his inflexibility on defensive scheme - he wanted to run a 3-3-5 - and his inability to hire a coach capable of doing so.  So he forced a scheme onto coaches who were unprepared to run it.  What Borges is saying here is that he has a vision for his offense and what he wants it to accomplish.  Part of that vision is gearing it more towards Denard's capabilities, but he (Borges) is not going to try to do something that he is not capable of doing.  If Hoke had come in and said "you're going to run the spread because that's what Denard is good at" he'd be falling into the same trap Rodriguez fell into with the 3-3-5.  I am encouraged that Borges has the reigns to tailor his offense to fit his player's capabilities, namely #16, but still works within what he has successfully taught and executed in the past.

Speaking of teaching another good sign from that presser was Borges' comment that the Wolverines are amongst the most coachable group he's been a part of.  Said Borges:

"In the eight to nine times I’ve had to change jobs -- I’d give you my resume, but we don’t have enough time -- I think this group is as receptive to what we want to do as any, maybe more so...Everybody has bought in to what we presented them, and it makes it easy to coach them."

The offense was ranked first in the Big Ten last year, and could have just as easily said "we already do things well, we don't need to learn."  Instead he's getting a group of guys who are eager to learn, and have bought into the system that he wants to install.  This is a good sign for execution come this fall.  As good as they were last year, they're not going to do well if they half-run the spread and half-run whatever variation of West Coast offense Borges is installing.  It's got to be all or nothing, and the fact that they've bought in to Borges' system points to success on the field.

The biggest challenge for Denard will likely be transitioning back to under center.  While Borges is going to run the shot gun, he won't run it exclusively, which is what Michigan did last year unless it was 3rd and 1 when they inexplicably went into that infuriating I-formation for a loss of 2 (sigh).  Picking up the mechanics of a 3 step drop and making the right reads might be challenging for Denard, but he did play under center for Deefield Beach High School, so it's not as if he's never done it.  However, the changes - mostly in speed - between the high school and college game are so immense that he's going to have to make sure that everything comes naturally in terms of getting the snap, making his drop and reads, setting his feet, etc.  If he's over-thinking any of those steps, he's going to have some trouble.

Remember last year when Denard would have 6 or 7 yards of open field in front of him on 3rd and 5, and he'd decide to throw the ball 20 yards downfield instead of just picking up the first down?  I think that was a product of youth - his coaches no doubt were telling him to look to throw first - and hopefully he'll have some better judgement in situations like that.  His coaches are going to be telling him to throw first now too, but it was nice to hearwhat they're telling Denard:

"...don't turn down wide open receivers, but if they fall off, run like hell."

That sounds about right to me.

The return of the Tight End is coming.  Steve Watson - a guy who has bounced from offense to defense - seems to have found a home in the Tight End spot, and caught a touchdown pass the other day in practice.  Borges said that "two-tight is a part of the offense" which represents a major change from what we saw under Rodriguez.

Hopefully we'll get more information from the defensive side of the ball soon.  All Borges said about defense was that Coach Mattison is an elite defensive coach and he's sure that they'll be doing the right thing over there.  As much as we've all discussed the offense during this off season, it's obvious that if this team is going to make any kind of move up from mediocrity it's going to be via an improved defense.  I found Borges' conference to be encouraging on this side of the ball - hopefully we can get the same from Mattison in the near future.