Michigan is AT THE MASTERS

Share All sharing options for: Michigan is AT THE MASTERS

This year's Master's Tournament at venerable Augusta National (no women allowed!) in Augusta Georgia will feature a little more Maize and Blue than in previous years with Amateur Public Links champion Lion Kim among the field.  Lion qualified by winning the US Amateur Links Championship at Bryan Park: 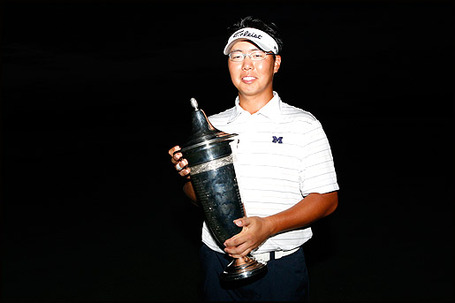 It was dark when he won.  It was also wet.  Wet and dark.  Lion, for those who don't know, is a 22 year old native of Lake Mary, Florida (born in S. Korea, but lived in US since he was 1), and is current Senior at Michigan.  His odds of making the cut are set at 35-1.  He will be playing with Davis Love III and Jose Maria Olazabal, which is probably good for him.  Both of those golfers are pretty easy going, and he won't have to deal with huge gallery followings. Their tee time is set for 12:31 PM.

Lion will use a local caddy at Augusta.  Knowing very little of caddying in general, it's probably good from a golf standpoint to use a local guy who knows the ins and outs of the course.  I sure know that if I were playing the Masters, I'd want somebody on my bag who knows me and can calm me down, etc.  Maybe I'm more emotional than Lion.  Also: in my wildest fever dreams I never think about playing the Masters, so what do I know?

Lion finished the par-3 contest T-19 at even par today.  For those who don't know, you do NOT want to win the par-3 event.  If Lion does threaten to make the cut, you can expect a ton of really bad Lion/Tiger puns from everyone involved.  Rick Reilly might just break something.

For a VERY detailed interview with Lion, head over to Mgo here.

We'll be watching Lion throughout the day - he's promised to gear some Maize and Blue tomorrow - and wish him the best of luck in his first (of many) Masters Tournament.  Go Lion!  Go Blue!