A Day In The Life: Dave Brandon's Master Plan Part One

Share All sharing options for: A Day In The Life: Dave Brandon's Master Plan Part One

/Scene: Ann Arbor, Michigan. Schembechler Hall. Through a walleyed camera view, we fly through Schembechler Hall, blasting past Michigan memories of glories past and present. Through a set of intricately carved wooden doors, we find ourselves in the Athletic Department offices, and suddenly through the door marked "Athletic Director". We join the scene as Michigan Athletic Director Dave Brandon puts the headset of his telephone into its cradle. A large smile creases his face and.../

: This had better be good. You know not to interrupt my Van Halen time.

: Van Halen time my ass. I was standing in the doorway when you told the East Lansing Dominoes franchisees to begin substituting E-Lax for cheese or you'd turn them all over to Pizza Hut.

: Don't have one. Gotta say that was tremendous though.

: We'll see if it even registers. They've been serving deep fried mice dipped in Red Hot as hot wings to those degenerates in Columbus for almost two years and we can't keep up with demand. The medical labs we've been ordering them from are starting to run out.

: What's the worry? Just set up a collection site outside of the Horseshoe.

: We tried that. Kept getting their undergrads stuck in the traps.

: How is that even possible?

: Let's just say the male undergraduates got a little too friendly with the mouse entry gaps.

: Yeah, on the bright side it means the Southern Ohio birth rate will drop like a stone over the next four years. Anyway, come in, sit down, grab a slice of pizza, and tell me what's up.

: Suit yourself, what's up?

: Wanted to bring you up to date on our recruiting. Things are going well.

: Quick question, are you going to recruit a defensive player that's not a linebacker?

: At least you're honest. What about on offense? Do we have any skill position guys lined up for next season?

: Christ Dave, have you seen the roster I inherited? Half of our scholarships are taken up by slot receivers/running backs. A quarter of the roster is LB/DE tweeners. And the rest are either starting or injured. I mean, did you see our linebacking corps last year. It was like trying to send a horse out to stud and having him hump a fence post instead.

: It makes sense, don't pretend you're not giggling over than analogy.

: Fine. It is a funny visual. Let's be clear, I'm pretty pleased with the recruiting. You've got some linemen and linebackers committed and this may be our best class in 6 years when it's all said and done. So answer me this.

: Your overall coaching record is below .500.

: You just took over a program that has had one winning season in three years and just fired its head coach.

: And you're changing systems on both sides of the ball.

: There is. How are you doing this? I knew you could recruit, but this is beyond what anyone expected.

: You really want to know you, do you?

: /Hoke gets up closes door, sits back down/ Alright... here it is.

: You just told me I was getting a raise and an all you can eat pass to Blimpy Burger for life.

: Impossible is nothing. (TM)

: I can't believe it. When did this happen?

: About four weeks ago. I didn't want to let you know about our progress until I could deliver a finished product. But here it is. /hands device to Brandon/

: Yup. I gotta tell you, it took a lot out of Denard. But he's back up to 100% now that he's rested. Now we don't have to take him on every recruiting visit, and he can finally get used to the offense.

: Thank God. Those picks he threw in the Spring Game... I had a flashback to 2008. I thought something was wrong with him. Or worse, that he wasn't going to fit the system.

: What's the effectiveness of the device?

: This isn't Sex Panther you dumbass.

: Sorry. About a 60% effectiveness. It's not as potent as the real thing, but it'll do the job when you need it.

/Brandon pushes a button on his desk and a false wall slides open revealing a map of the US with yellow lights dotting the map./ 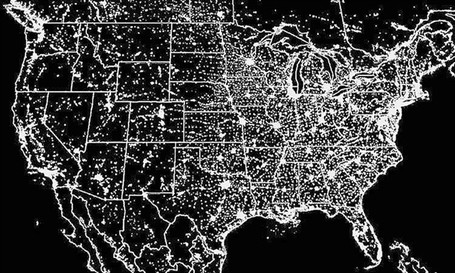 : Now it begins. What's our readiness?

: We need a few more weeks to produce additional devices and distribute them to our trusted coaches.

: Acceptable. Who knows about the device outside this room?

: Other than Denard, only the four geeks in the physics department who built it. I introduced them to girls as a reward. They won't say a word.

: Is the plan ready to be implemented?

: Tremendous. How effective is the device when dealing with conflicting childhood loyalties?

: You've seen our success against Michigan St. this year, haven't you?

: So you're ready to execute the plan?

(HT: the insanity of EDSBS and BHGP.)