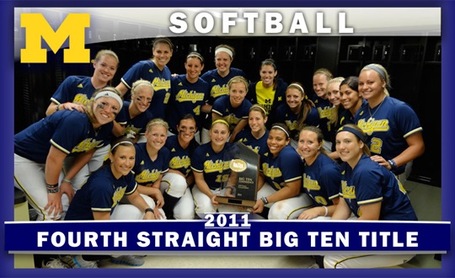 UM Softball Staff's Quick Thinking Saves a Life via MGoBlue.com - This is beyond incredible. Michigan Softball Coaches Carol Hutchins, Bonnie Tholl and Jennifer Brundage were sitting down with a recruit and the recruit's father during a visit, when the father apparently suffered a heart attack. The coaches and players calmed the recruit and saved the father's life using CPR and an automated external defibrillator (AED). Michigan AD Dave Brandon wrote about the event on his Blog on MGoBlue.Com and it's a must read this morning. It's just amazing. It speaks not only to the incredible decision making of the coaching staff bu to the outstanding training they receive. Kudos to Hutch, Tholl, and Brundage!

Yahoo Sports: Rivals.com Ranking - Rivals150 for the class of 2012 - 2012 Michigan Commits Glen Robinson III (#50) and Nick Stauskas (#89) check in on the Rivals 150. Any concerns about John Beilein's recruiting chops may now be deposited in the center of the Earth and incenerated. It's arguable he's one of the best hires of anyone in the Big Ten, in any sport, in the last five years.

All's forgiven? Jalen Rose says Grant Hill to help support new Detroit charter school via The Detroit News - A happy ending to an uncomfortable story. Classy move on Hill and Rose's part to make sure that things were patched up, and even better, made sure that patching up whatever went on between them ended up helping other people.

Players and associates of 2010 team haven't received gold pants charm for beating Michigan via BuckeyeXtra - The Columbus Dispatch continues to kill it on the Ohio State saga of tats, charms and cars. The investigation has spilled over into something that hits a little closer to home for the true supporters of THE GAME. With the investigation ongoing, there is some serious debate going on at to whether the Gold Pants Club will even award the 2010 team their traditional Gold Pants for their most recent pantsing of Michigan this past November.

"If they vacate the win, it makes no sense to award the gold pants, at least in our minds," Lachey said. "And if you hand them out and say, 'Oh yeah, we'll need to get them back if the win is vacated' - I'm pretty sure that wouldn't be a smart way to go. "And I'll be honest: We don't want to see any 2010 gold pants on the market right now."

It's honestly a pretty sad commentary on the state of the rivalry and how some of the current crop of Buckeyes view it. Whether I like the fact that it's been seven years since Michigan won THE GAME or not, the Gold Pants tradition is one of those things that keeps the tradition special on the other side of the grid iron. It's an honor for the players to earn them and a special part of the Rivalry. In a way, it's really sad that the pants, a symbol of THE GAME'S importance, may be what brings one side of the Rivalry to its knees.

GOOD NEWS! Catching Up With Zoltan Mesko! Wooo! - Zoltan continues with his plans to control all space and time... through interning at a Private Equity group during the lock out. I  wager one dollar that he will be able to purchase his own team after working the markets for... oh say... 26-28 hours. Normally he would pay in space dollars, but our feeble minds aren't prepared for the awesomeness of space currency that bares his likeness.

The DOJ's Letter to OSU - The dirty stuff from December of 2010 outlining all the stuff that had been seized from the Tattoo Parlor's owner that was under investigation. There's a lot of stuff on this list.

Lloyd Carr's Induction Into The College Football Hall of Fame

Michigan's Lloyd Carr more than just a football coach via The Detroit News - "Carr will be inducted into the College Football Hall of Fame this year, and while his former player believe it’s a deserving honor, they also think there’s more to him than Xs and Os and wins and losses." Co-sign 1,000x.

Former Michigan coach Lloyd Carr back in the spotlight, right where players feel he should be via AnnArbor.com - Amen.

All your Trophy are belong to us.

U-M coordinator Al Borges seeks featured back for 20-plus carries via The Detroit News - Yes please. My money's on Stephen Hopkins or Michael Shaw. Don't count out a healthy Shaw in this offense.

Michigan football team ahead of schedule in cutting practice time required from NCAA violations - Michigan athletic director Dave Brandon said Monday at the Big Ten spring meetings that the Wolverines have already removed two-thirds of the hours (roughly 85 out of the 130) docked due to the NCAA extra practice probe under former coach Rich Rodriguez. Great News. Hopefully news that means the Wolverines will be close to done with this come Fall Practice.

Assessing the Capability for a Turnaround: The Baseline - Part one of a series to determine the likelihood and degree of a turnaround for Michigan football in year one under Brady Hoke. Mathz is funz.

Assessing the Capability for a Turnaround: San Diego State - Part two of a series examining the past history of Brady Hoke, Al Borges, and Greg Mattison to project Michigan's chances of 2011 success. Oh Noez!

The Battle of Michigan: The Arab Spring - Genuinely Sarcastic is at it's slicing best as it takes a vicious look at the in-state recruiting battle between Michigan and Michigan, that is close to turning into an all out rout. Brian at GS looks at the swing, the effect of the coaching change at Michigan, and how it's playing out in his own thunderous style.

NCAA: Let's Ramp Up The APR Doom via MGoblog - Yet another way Rich Rodriguez screwed the program. (I'm kidding. Don't burn down my house.) MGo tallies Michigan's Academic Progress Ratings and there is DOOOM on the horizon for the next three years. The minimum APR allowable is 925. Michigan's in 2010 was 897. Fortunately Michigan was above 940 in 2009 and 2008, but that score is going to be a real problem over the next few years. Details contained in the link.

Amani Toomer returns to Ann Arbor for the first time in 15 years via Ann Arbor.com - Welcome back Amani. "It was good to be back, good to see some players and people, and I saw coach (Gary) Moeller, which was special," Toomer said. "I just really felt like a part of the whole Michigan family, more so than I did in the past couple of years. I feel more connected than I did before, so that’s always a good step forward."

Michigan QB Denard Robinson has 5-1 odds on winning Heisman via detnews.com - Hey, it's too early to have a clue what's going to happen this college football season, but that won't stop Lindy's! If you like to gamble (which you shouldn't, because it's bad, mm-kay), Denard Robinson has been rated at 5-1 odds to win the Heisman. Andrew Luck checks in at 3-1. the only other Big Ten player on the list, strangely, is Kirk Cousins at 33-1.

Tate Forcier will not play for Miami via The Detroit News - ESPN's Heather Dinich, attributing the information to a source, says "personal issues" will prevent Forcier from joining the Hurricanes. My understanding is that those "personal issues" are the same ones that got him sent home from the Gator Bowl. Man. I really hope things work out for Tate, but it looks like it's going to be a while before this story has a happy ending.

Michigan football coach Brady Hoke works on his camps, his travel and other notes - Hoke will be leading two "Wolverine Technique Schools" next month, teaching basics about football and strength and conditioning. Good to hear. Love to see that Michigan is back to bringing as many kids to campus as possible to give them a taste of what it's like. Also a plus, it means that their coaches will be spending some time in Ann Arbor. Hopefully that will work to rebuild some of the battered bridges people perceive Rodriguez left Hoke. I personally think the OMG DICK ROD line of people screaming that Rodriguez poisoned the in-state well are wrong, but perception has sadly become a variant of reality here. Still, it's good to see Hoke out there, making in roads.

U-M WR Darryl Stonum pleads not guilty on drunken driving charges via The Detroit News - Michigan receiver Darryl Stonum, whose future with the football team remains unclear, pleaded not guilty during his arraignment Friday morning on charges of operating a vehicle while intoxicated and with a suspended license. Sigh. I really, really hope that Darryl gets it together. He's a great player and apparently a great kid who made a really bad decision. Good luck to him.

Michigan Football Blog: B1G Coaches Hot Seat - Leaders Division - Brad over at MnBN takes a look at the coaches on the Hot Seat this fall.