You, Sir, Have the Greatest License Plate In Michigan

Share All sharing options for: You, Sir, Have the Greatest License Plate In Michigan

We're not ones for petty jealousy around here (yes we are), but we have to admit, when we received the photo below from reader Greg we were a tad bit envious. 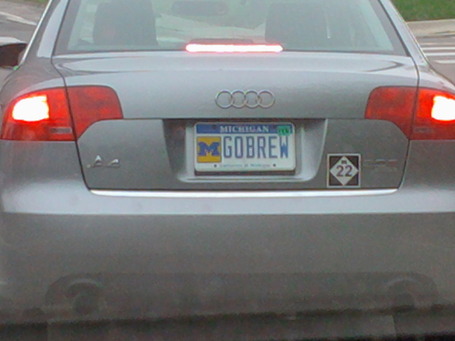 Solid beyond words, good sir. Also a big fan of the M22 sticker, we'll see you at the sandbar this summer. Then we'll sneak off and steal your license plate. One of the problems with being an Illinois resident is that I can't get the "M" license plate for the car. Not that I'd want it right now anyway. It's hard to be too "WOOO GO TEAM" in a Dodge Stratus. Sigh.... Bo wouldn't want me "cheering" in a shoe box with wheels, so until the purse strings are a little looser around the ole' Brew household, no plate for me.

It's a lazy Friday, and we're bored. So this begs the question, if you were going to have a license plate that celebrated your Michigan fandom what would it be? Now, for purposes of retaining the rights to my favorite license plate which will grace the front and back bumpers of the new Brewsmobile (once I've got the coin for this) I won't disclose my preferred plate. However, I will give you a couple of ideas to get you started.

Like I said, it's a lazy Friday. Mayhaps the guys will have something up later. Mayhaps not. Enjoy the weekend everyone.