Share All sharing options for: Remember Me: Jake Ryan

A part of a series highlighting our redshirt freshman who will be actually playing on Saturdays for the first time in their Michigan careers.  Previously: Josh Furman 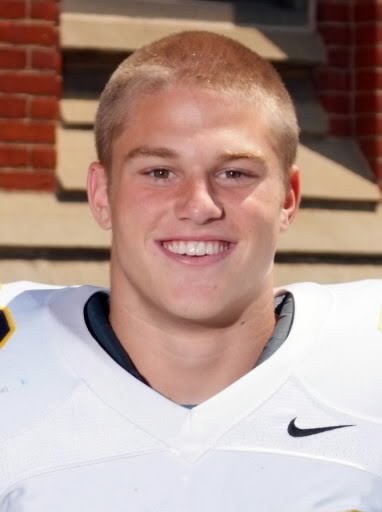 Jake Ryan's commitment to Michigan came as something of a surprise.  Although he was a starting linebacker at Ohio's St. Ignatius - a traditional power in Ohio's largest division - he was not ranked highly by any of the recruiting services, if they bothered to rank him at all.  A 2-star to Scout, and a 3-star (barely) to Rivals, Jake flew under the radar for most of his college career until he put on 20 pounds and grew 2 inches going into his senior year.  As he came on the scene very late - only establishing himself as a starter for his senior year - it is very possible that the analysts just missed him.  Additionally, he missed nearly his entire Junior year - when analysts are starting to really evaluate prospects - due to injury.

During his starting linebacker campaign, he put up 8 sacks, and 24 tackles for loss, seeming to excel at getting into the opponent's backfield and wrecking plays.  Take a look yourself - this is a Jake Ryan highlight tape, so while he's not spot-shadowed, um, he's the one making the plays.  The standard "volume warning" for highlight tapes applies here.

Coming into Michigan, Ryan was reported at 6'3" 220lbs, which was probably a bit generous.  At 6'2" 210 lbs, probably a more accurate measurement, he was on the smallish side of the Middle Linebacker scale, but with Michigan's depth woes (at the time) it was expected that he might actually contribute last year.  With last year's defense firmly in the cellar, there was no reason to expect that Ryan would make a more significant impact than Demens, and he was instead given a much-needed red shirt year.

Offers for Ryan's services came from mostly MAC schools, although there was reported interest from then-Brady Hoke coached San Diego State, which is encouraging for his future prospects.  His 40 time is listed at 4.57, which sounds about right actually.  Probably a little fast.  There was some speculation that Ryan could end up at defensive end should he put on the weight (getting up to the 250 range) that his body seemed to suggest he could carry.  However, it seems that he is comfortable playing more around the 225-230 range, which still puts him on the smallish side for linebacker.  I think that defensive end is probably out of the question as he looks to put on some more weight through summer workouts just to get to linebacker-ready weight.

Something not to be overlooked, Ryan played his entire highschool career actually at linebacker, unlike many converted highschool safeties, defensive ends, or running backs that end up at that position.  In high school, perhaps spurring Rodriguez's initial interest, he played a thumping downhill OLB in a 3-3-5 stack.  Similar to Josh Furman, Ryan seems most comfortable playing vertically, and may lack the lateral speed to cover faster slot or TE receivers.

This spring, Ryan has come in for some specific praise as he's moved to the strong-side linebacker spot prohibitively occupied by Cameron Gordon.  Mattison on Ryan's development:

"Jake Ryan has done a really good job all spring as far as improving, playing a totally different position...He’s made a lot of mistakes and then every time the next day he comes back doing it right. The one thing we’ve really been pleased with Jake is he shows tremendous energy and speed off the edge, which I think is something that we need definitely in our package."

Add this to the former staff's assertions during Gator Bowl practices that Ryan was playing really well, and we might have enough evidence to suggest that Ryan can contribute this season.  During the Spring game, Ryan combined with J.B. Fitzgerald for a sack and returned a Devin Gardner interception for a touchdown.  Ryan on that play:

"I was dropping back, kind of read to the flat and leaned toward the flat, the ball came right to me. I guess it was supposed to go to an outside slot receiver"

By all accounts, Strong Side starter Cam Gordon also had a productive spring, so I'm thinking that he's your starter until we hear otherwise.  However, with Ryan playing well, any sign of struggle from Cam will probably put Ryan on the field.  My guess is that Ryan still sees special team duties, and likely spells Cam for at least portions of games.  What is most encouraging is the fact that Michigan seems to have a viable two-deep at that spot, and despite Ryan's low-caliber offer sheet and ranking, he looks like somebody who can contribute productively on the field on Saturdays.  With the glut of linebackers over the past two classes, Ryan will be pushed for playing time, but right now I think you're looking at somebody who will be a solid contributor this year in backup and ST duties, and will likely continue to push Cam for the starting spot as he puts on weight, if not this year then next.

My general excitement level over Ryan has certainly moved from "eh" to relatively excited.  It's tough to get too excited about an undersized MAC level prospect as a recruit, but the praise that Ryan's received from both the former and current staff is encouraging to say the least.  He's got the entire summer to add weight, and hopefully he works hard and sees it pay off on the field.  Importantly, Cam Gordon is not the biggest guy ever either, it's just that he seems to grasp the defense better and is probably better in lateral coverage.  Ryan, physically, is probably ahead of where Gordon was last year, and once he "gets it" will probably be a more prototypical linebacker in Mattison's defense.  Ryan's spring has at least served to put Cam Gordon on notice.  That kind of competition breeds competitiveness and, to borrow coachspeak for a minute, excellence.  I'm looking forward to what this position does in 2011.

Finally, here's a recent video showcasing Ryan's new haircut, which makes him look a little less like a 12 year old than his mug shot above.  His segment starts at 8:59: