Nothing Up There But Air: If things don't change College Football is going to see a lot more Terrelle Pryors

Share All sharing options for: Nothing Up There But Air: If things don't change College Football is going to see a lot more Terrelle Pryors

Say what you want about Terrelle Pryor, that he's a liar, a cheater, a thief, a Judas, whatever; the kid's got balls the size of Volkswagens. Seriously. I have no idea how he can carry around a pair of boxer boulders like that without debilitating knee issues and a back curved like a crescent moon. The guy must have to have a Coleman tent sown onto the front of his jeans just so he can go outside without little old ladies fainting. Don't belive me? Well how the hell else can you explain Pryor showing up to Tressel's firing announcement in a car that didn't belong to him while driving an a suspended license?

Or maybe he's just that dumb.

When Ohio State quarterback Terrelle Pryor pulled up to a team meeting Monday night in a Nissan 350z with temporary tags, he was driving with a suspended license, according Columbus TV station WBNS.

Pryor’s 90-day driving license suspension began about two weeks ago after he failed to provide proof of auto insurance during a traffic stop. That suspension lasts until August, WBNS reported. - via WEWS 5 Cleveland.

Lovely. Driving on a suspended license, without insurance, in a car that doesn't belong to you, when the NCAA is breathing down your neck, and your best chance of employment looking at a lockout. Pure genius. Maybe you can get nailed for speeding in cars you don't own as well...

Pryor was stopped earlier this year for running a stop sign, last year for driving 94 mph in a 65 mph zone, and two years ago for going 99 mph in a 65.

Well... Maybe he thinks it can't get worse. I mean, afterall, what else could possibly be out there?

[SI writer George Dohrmann] believes that Pryor traded, "more than 20 items, ­including game-worn shoulder pads, multiple helmets, Nike cleats, jerseys, game pants and more" for tattoos or cash. This, Dohrmann argues, should prove OSU was aware (or should have been aware) of what was going on. How could they not notice how much equipment was going missing? - HT: MGoBlog

One day Ellis asked Pryor how he was able to take so much gear from the university's equipment room. Ellis says the quarter­back responded, "I get whatever I want."

What it all boils down to is that Pryor could very well be the worst case scenario of an athlete that we've all been dreading for years. In biblical terms, the college football anti-christ. A being so athletically gifted that every major program on the planet was willing to sell it's soul to possess, not realizing that was indeed the deal they would make. What was the phrase from Bull Durham? "A million dollar arm and a five cent head." Wait... no... that quote applies to this guy. 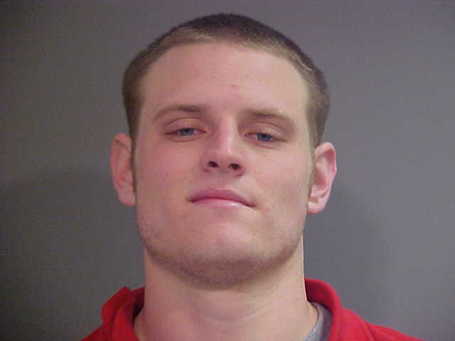 In an age of over-privileged and prima-donna athletes, Pryor may very well be the worst of the genus that we've ever seen. Certainly we've seen players do worse things than Terrelle. We've seen drug dealers, brawlers, armed felons breaking into houses, kidnappers, etc..., but we've never seen a player so physically gifted, so obviously graced with ability, throw it all away in such a selfish fashion.

Don't kid yourself, Pryor was the full package. At 6'6", 230 lbs quarterback with a cannon arm and a 4.4 forty. He had personality, good looks, and a boundless future on the gridiron. But... then again... you knew what you were getting. Pryor knew his value to a major college football program coming out of high school. Perhaps more importantly, so did his handlers. Instead of dealing with mom and dad, recruiters found themselves going through a shady 67 year old businessman named Ted Sarniak. Who is Ted Sarniak you ask? Well... he's the kind of guy you pray your kids never meet. He's the Columbus version of Ed Martin. And old guy with a little money who likes to hang out with high school athletes. /shudder/

The only person that compares to Pryor is my favorite person ever, Chris Webber. While Pryor's transgressions don't approach the level of Webber's money grubbing (that we know of yet), the level of douchebaggery that accompanied both is startling. In the case of Webber, he pocketed booster money. In the case of Pryor, it appears he was pocketing EQUIPMENT from OSU's program, getting it signed by other players as well, and then trading it or selling it. Where Webber took money from one source, it appears Pryor's had his hand in the till all over Columbus, taking favors and money from multiple sources and basically flaunting it.

What's amazing is that it appears Pryor never believed he'd be caught or that anyone would catch on. That, to him, breaking NCAA rules was normal and acceptable. That he could do all these things and that no one would, you know, notice. Talk about a five cent head. It's easy to see why he sold or traded all those helmets, there was nothing upstairs to protect but hot air between the ear guards.

Personally, I'm hoping that Pryor is a warning to everyone in college football. But I know better. Pryor isn't the result of, or the the illness that is currently affecting college football. He's just a symptom. He's a precursor of things to come if we don't fix what's wrong right now. And if we don't fix it it soon, college football will be littered with Terrelle Pryors of all sizes and shapes. Enticing coaches and eventually bringing on their downfalls. Because for all the physical gifts they'll be endowed with, upstairs they'll be nothing up there but air.