With the SB Nation NCAA Conference Re-Draft kicking off on Monday I thought it might be an appropriate time to remind the Commissioners of these soon to be fine, imaginary leagues just how awesome the University of Michigan is. There are so many things that make Michigan awesome that it's easy to miss some of them, so I figured I'd take this lazy Friday to fill you in. Commissioners, I'm here to help.

Let's be clear, there are more reasons to love Ann Arbor and the University of Michigan than I can count. So I limited myself to 100 Reasons to Love Ann Arbor for your benefit. Food. Drink. Happiness. It's all there. Reasons 4, 5, 6 are particularly close to my heart. Click and see why.

Still, for Michigan fans, alumni, and my regular readers you need no introduction to Michigan's glory. You've lived it. So if I miss anything, put it in the comments so our esteemed Commissioners have a full grasp of what they get when they take Michigan with their First Pick of the Draft.

Massive Hat Tip to Cowboys Ride For Free for the idea and most of the informational content.

Athletic Revenue: Let's start off with what really matters... Money. Cold hard cash. Somalians. Ducats. Lira. Euros. Benjamins. Bread. Cheddah. Dough. Unless you're blind, you've noticed the dump trucks rolling up to the Michigan Athletic Department and dumping money onto a cash pile that's higher than the Michigan Stadium. There's good reason for that. On a year in year out basis, thanks to sound financial management and general awesomeness, Michigan ranks in the top 5 of College Athletic Department revenue for the entire country. The numbers available indicate Michigan was just below the $100 million mark in 2009. I've gotta believe it's eclipsed that mark by 2010. We make it rain, bitches. 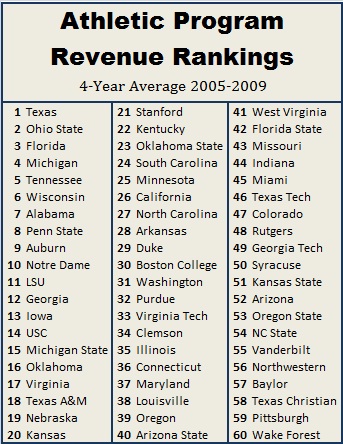 Another thing to keep in mind is that no school in the country has the facilities that Michigan has. The largest football stadium, the best practice facilities, the greatest hockey barn on earth. As a result, Michigan will continue to attract top talent and continue to stay atop the financial leader board.

TV Ratings: Think Detroit's dying? It is. But it's media market is alive and well, ranking at the #11 media market in the country. Let's face it, cities die because no one leaves the house because they're watching TV and buying things they see on TV, and Detroit's got lots of people like that! Sarcasm aside, the surrounding suburbs and area a rife with rich people and cable spots. Importantly, Michigan's in the largest Media Market in the Big Ten with a real team (yeah, you heard me Northwestern). Plus, as a National Program, Michigan enjoys being in prime all the time. And your conference will benefit from it.

Academics: One of only a handful of public universities in the top 30 school, according to US News and World Report annual rankings. And by handful I mean four. What's even more impressive is that USNWR's rankings don't include Michigan's top 15 business school, top 10 law school, its graduate programs, its top flight Medical and Dental programs, etc., etc., etc. You're going to be hard pressed to find a better, more well rounded academic institution than Michigan.

Co-Eds: Over the years Michigan has gotten a reputation for being a place of, shall we say, limited eye candy. Not so anymore. All you have to do is peruse MangusThunder's ongoing series of Attractive Michigan Girl of the Week to know that the quality, and quantity, of good looking women at Michigan has shot through the roof.

Let's be clear about one thing tho. There aren't hotter women at Michigan because Michigan's gotten easier to get in to. It's actually gotten harder to get into Ann Arbor than any other public school in the country. It's because the hot girls are getting smarter. And they're going to Michigan. Hot chicks with brains. That's the dream baby. And we get to live it every day. Brainy Cheesecake? Brainy Cheesecake! 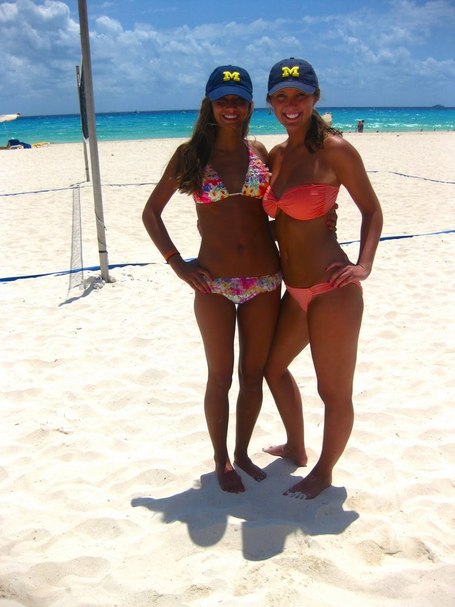 Historic Success: I think we're good here. Michigan sports 27 varsity teams (both men's and women's) and will add Lacrosse for both next season. Overall, Michigan has 33 National Titles. Football, of course, has led the way. Let's recap this shall we? Via Wiki:

So we've got that going for us, which is nice. Throw in a National Championship in basketball along with historic success and two NCAA tournament invites in the last three years and you're covered on the Big Two. Then there's the Hockey team which sports 9 National titles and a slwe of Frozen Four appearances. Then there's our Gymastics teams and Swimming and Diving teams which continue to capture men's and women's national championships. Our Tennis teams are considered to be the two of the best, on the rise programs in the country.

This should sum it up nicely:

In 10 of the past 14 years (through 2008-2009), Michigan has finished in the top five of the NACDA Director's Cup, a list compiled by the National Association of Collegiate Directors of Athleticsthat charts institutions' overall success in college sports

All the details can be found here.

Rivalries: We've got our fair share. The Michigan Ohio State rivalry is known only as THE GAME to those who care about it. There is no other descriptor. While Michigan and Ohio State fans correctly regard it as the greatest rivalry in all of sport, some disagree. Even so, you're not going to find a top five list of rivalries without THE GAME featured. Throw in the Michigan Michigan State rivalry (football/basketball), the Duke/Michigan rivalry (Basketball), and any Pac 10 12 game we play, and you get the picture.

Party Rankings: We like the night life. We like to boogie. Here's the thing, we're not drop down, face in the gutter, alcohol poisoning kinda partiers. I'll put an Michigan Tailgate up against anyone, any day. I partied enough in college to do irreparable harm to my GPA, but dammit, it was worth it. But if you're looking for OMG WOOO DRNKZ RDBULLZZZZ, go to East Lansing.

Kind of a trade off, really. I'm not sure you can have all of the above if you're lying in a pool of your own Rumplemintz'd vomit from the night before. If you come to Ann Arbor to party, you'll have a good time. It's impossible not to. And as an added bonus you won't have to deal with some DBag in Kayne West sunglasses at Midnight calling you "Brah."

So there you go Commissioners. Readers, fans, Alumni, anything I missed? If so, put 'em in the comments.