Share All sharing options for: Reactions to the Jim Tressel Resignation and Ohio State Fiasco from Around the Michigan Web

It's Thursday and the college football world is still coming to terms with the veritable tear in the CFB Space time continuum induced by the TerrellePryor/OSU/Jim Tressel scandal. Frankly, there's so much out there that it's hard to stay on top of the story. Stil, back in Ann Arbor, there are a lot things being written and said that warrant your attention. To help you out, I collected many of them here. If missed any of the Michigan centric reactions, or missed a particularly relevant non-Michigan blog reaction, please post it in the comments below.

Dotting the Lie - Genuinely Sarcastic lists, in incredible detail, the time line of transgressions at Ohio State under Jim Tressel. It's truly, truly staggering. This is probably the most important piece of writing on the subject by any Michigan or MSM writer. I'm sure there are things that they missed, but man.... this is just overwhelming.

The Little Sensor - A great piece from Holdin' The Rope on how we were all so fooled by Tressel's "Senatorial" appearance. One of the best pieces HTR has done.

The Jungian Thing - Wolverine Liberation Army poster ChiTownBlue examines the duality of man and the fall of Jim Tressel. As CTB points out, the most common defense of Tressel is that he was/is a good man, prone to charity and goodwill. But when that same person is prone to deed of evil, the two don't cancel one another out. I may disagree with WLA from time to time, but there are plenty of times I wish to God I could write this well. A must read.

A Worthy Adversary, A Hated Rival...A Cheating, Two-Faced, Classless Asshole - UMTailgate sums up how a lot of Michigan fans are feeling now that the truth of Tressel's transgressions has come to light.

The Best of Tresselgate - It's as if you read my mind Yost.

In the wake of Ohio State coach Jim Tressel's quitting before he got fired resignation, [MZone] put a few of [their] favorite posts about the scandal in one convenient place for all your linkage needs. 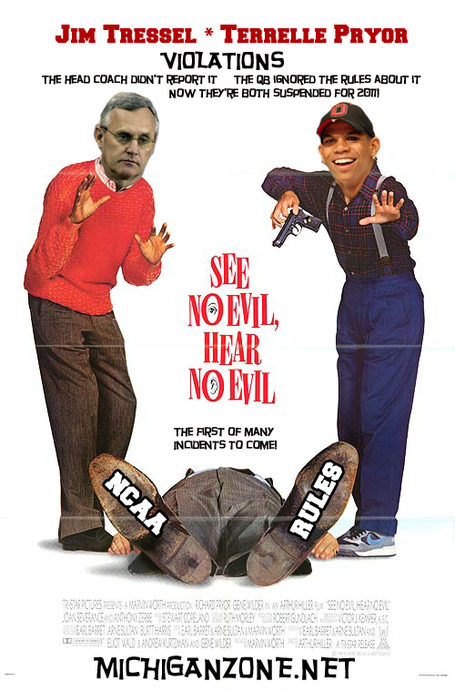 The most common defense of Tressel I’ve seen and heard has been that he’s a quality human being who was just doing what he could to protect his players best interests.

The Kipke Culture - MVictors takes a look at a long forgotten Michigan scandal from the 30's that gives a Michigan perspective to the recent foibles in Columbus. No show jobs for athletes? Yup, it happened here 80 years ago.

ESPN and SI's Happy Cover Accident - Maize and Blue Nation points out the happy coincidence between the two cover stories.

Prevail and Ride: Tresselball - This MSPaint-fest may not be totally safe for work, as there are dongs drawn in at the bottom, but Holy God is it funny.

Jim Tressel is gone, so how does this affect Michigan recruiting? -  Brice's Recruiting takes a long hard look at how Michigan may or may not benefit from Tressel's resignation and Ohio State's pending sanctions. Brice specifically looks at six undecided/presently committed players that Michigan and TSDS are competing to land come signing day. Interesting read, though I think it's a tad optimistic.

Jim Tressel is Fired - MGoFootball's take on the firing, recruiting and Terrelle Pryor.

What Comes Around… - Maize and Go Blue wonders aloud what Tressel's cheating really entailed, how it was used and whether it was worth it in the long run for Ohio State fans.

Tressel is Done - The BIG HOUSE Blog asks all the questions as they pertain to Michigan, and tries to give you some answers following Tressel's resignation.

Tresselgate: Our Blogging Cup Runneth Over - MZone proposes Jim Tressel as Bob Barker's replacement. I'll com'on down for that one.

Goodbye, Jim - It's easy to forget, as an older alumni, that there are a generation of Michigan fans who've never experienced a Michigan win, or (as may be alleged) a fair Ohio State victory. Alex over at the Wolverine Blog reminds us of this.

I’m starting as a freshman at the University of Michigan in the fall. I’ve seen several games at the Big House, I’ve been to thrilling victories and crushing defeats. All I’ve seen in "The Game" though, has been Ohio State, victorious, and cheating the whole time. I’ll be in the student section on November 26th, 2011, hoping to see the first victory over Ohio State since the 100th game in 2003, hoping to feel the elation of victory that goes along with beating that school in Ohio. At least, now that Tressel’s gone, the game will start being played fairly once again.