Share All sharing options for: Wednesday Happy Hour Is Quotable

Maize n Brew gives you your daily (or semidaily) rundown of all the Michigan Football, Michigan Basketball, College Football, and College Basketball news you need to get through the tedium of your boring desk job. For good measure we'll throw in a little irreverent information, comedy and commentary to help you salt away the time until the clock strikes 5pm. If you want Maize n Brew in 140 characters or less, follow us on Twitter! Or you can friend us on Facebook and become a fan of Maize n Brew on Facebook for more links. Time to take a sip of your:

Interview with an icon: Desmond Howard - God I love this interview. Kudos to Omaha.com. Desmond's quotes in this are hysterical.

Three and Out - It’s official, John U. Bacon wrapped up the book and you can pre-order on Amazon.com now.  Three and Out will be released on October 25.

MGoWedding - Congrats to Brian and his fiance on their pending nuptuals from all of us at Maize n Brew. One favor to ask. Please don't UFR the reception. (j/k, congrats Brian).

Rivals - Q-and-A: Ex-Michigan coach Rich Rodriguez - Tom Dienhart sits down for a 1-on-1 with Rich Rodriguez. Not a lot of new material to cover here, but an interesting read nevertheless.

History heightens standards at Michigan - The Freep's Mark Snyder does a guest column over at Big Red Today. Not one of my favorite pieces, but in a way he tries to sum up the "this is Michigan" type feeling from the neo-traditionalists in the fanbase. Your call whether you like it or not.

Michigan, Denard Robinson Clean Up at BTN Awards Show - Ace sums up the All Denard Robinson, All The Time night at the Big Ten Network Awards. Saves me the trouble.

Denard Robinson vs. Notre Dame – Most Dominating Performance - Along those lines, MGoVideo provides us the Denard Interview from his BTN Awards show sweep.

The Real Heisman Odds - Heisman Pundit gives you his Heisman odds. Denard is 15/1. Sounds about right.

Michigan Retro Diary: 2008 Capital One Bowl (Part One) - Hard to believe it's been four years. Ace takes us back to one of my favorite Michigan games of all time.

Michigan's Tim Hardaway Jr. working on his game at Team USA tryout - Tim Hardaway Jr. is busting his butt to make an impact on the Team USA Under 19 world team. He went for 19 points against Air Force. Love that this kid can't wait to get better.

Touch the Banner: 2011 Countdown: #73 Antonio Poole - I am excited about this kid for a lot of reasons, but this comment from TTB is yet another reason to put on the list:

As soon as Mattison was hired, he made it a point to visit Poole and push for a commitment, which showed that Mattison really wanted Poole.

Can't wait to see what our Linebackers look like in a couple of years. It's going to be awesome.

Touch the Banner: 2011 Countdown: #74 Terry Talbott - Linked for the sad news contained therein. Sounds like Talbott may have a serious injury. Hope it's not true.

Notre Dame, Nebraska break tradition with bold glove designs - This. Must. Stop. Now. Click the link. See the photos. Gouge out your own eyeballs. Adidas is starting to piss me off with this kind of crap.

Auburn players show off championship rings - Bling! Soon to be available on E-Bay! 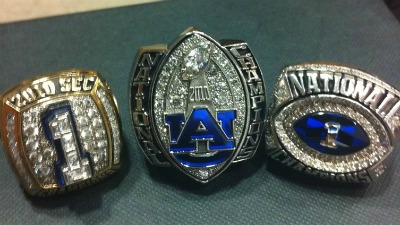 Square Pegs, Round Holes - Eleven Warriors tries to find some answers to what in God's name is going to happen to their offense and how they're going to run it. Without Tressel to guide Ohio State's hoarde of young QBs, it could be a rough year in Columbus.

Joe Paterno Breaks NCAA Rule - The old man stopped to look at some ducks and feed them. But it turns out that Joe's glasses were out of perscription and the ducks turned out to be his players. He regrets shooting one of the ducks and eating it, though it was delicious.

Four conference commissioners made $1 million - Jim Delany laughs at your inappropriate comments by rubbing money on himself and controlling a media empire.