Time for another set of plates for Maize n Brew's Univeristy of Michigan Licence Plate Project. My thanks to all the readers who have sent in their (or other people's) awesome plates for the project. Just as an FYI, even if your state is represented here, I still want to see your Michigan spirit in license plate form. Today, we're bumping off two more states from the list. Say hello to Arizona and North Carolina: 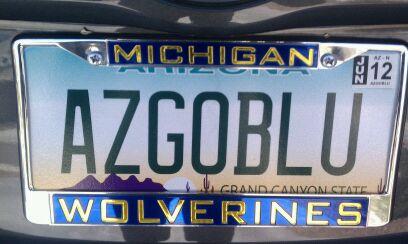 Thanks to reader Larry in Phoenix! 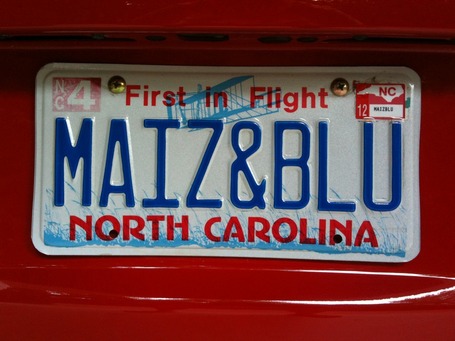 Thanks to reader Z!

Thanks again to all the readers who've sent in plates for the collection. We're making some progress here and quickly clicking off the states as we go along. For those of you keeping track we've notched Michigan, Ohio, Florida, Kentucky, Georgia, Nebraska, Virginia, Texas, New York, Maryland, Oklahoma, Tennessee, Indiana, West Virginia and Alabama. Adding Arizona and North Carolina leaves 33 states to go. If you want the easy list, here's the main tag for all of them: "Michigan License Plate Project".

I'm hoping to get every state in the Union represented here and then have a playoff (you know, that thing we don't have in college football) to determine the best of the group via your votes. So keep the plates coming and we'll keep putting 'em up.