It's that time of year again! With football season around the corner, we here at Maize n Brew want to give YOU a small, but relatively filling portion of opponent previews. Kind of like a good stout - you don't need too much to feel warm and satisfied. You can also look elsewhere on the site for other previews, like broad overviews of the offense and defense, and position-specific previews. Next up, Michigan's second opponent of the season, the Notre Dame Fighting Irish.

After being tested early by Western's aerial attack, it's time for Michigan to move ahead to the second game of their season, the first ever night game at the Big House against none other than their erstwhile rivals, the Irish. Storylines abound for this game, so take your pick. My favorite one to harp on right now involves shaking my fist at the sky and asking why Michael Floyd is being allowed to play. I think a 2-game suspension would be fair and balanced punishment. (Not that I'm biased, or anything)

We can also safely call this a homestand, as Michigan's first five games are at home. This will be the stiffest test of the first several games, as Notre Dame is talented and (I say this grudgingly) well-coached. I wouldn't trust Brian Kelly to watch my pets, but he's got a decent football IQ and certainly has seemed to motivate the Domers a bit more than his ill-fated predecessors. So, night game, September 10th, under the lights. One of the most-expensive games of the season in the ticket markets, this one should live up to the hype and provide an excellent bellweather game for the Michigan (and Notre Dame, but who cares?) season.

More goodies after The Jump.

Getting to Know Them

WHO ALL SEES THE LEPRECHAUN IN THE TREE? SAY YEEEAAHHHH!

Coached by the aforementioned Brian Kelly, the Irish compiled an 8-5 record in his first season as head football coach, winning the oh-so-prestigious Sun Bowl (/grumble, grumble... blowout loss to Mississippi State... grumble...GAH!). They also won their last four games of the season, which means Michigan's got two teams with some nice momentum from last year as their first two opponents. With respect to commenters pointing out the illustrious talents of Louis Delmas, Greg Jennings, and whoever else went to Western, Notre Dame is a considerably more talented football team. Specifically, Kelly has returned to the old standard of bringing in mauler linemen and sizeable linebackers. While Charlie Weis focused more on skill players and secretly giving Armando Allen the Elixir of Life and Elgibility, Kelly has shown a desire to dramatically improve the trenches. Let's hope it doesn't work.

Notre Dame returns a bunch of starters (I'll guess and say seventeen) so they've got experience. But keep in mind it's only Kelly's second year with the program, and his recruits haven't quite cut their teeth yet. Just like all programs would, give him a year or two, and the players will buy in to Kelly's system and he'll right the ship and return Notre Dame to its winning tradition. This was an unconventional hire from a Big East school, but the patient Domer fanbase will certainly give Kelly their full support as he readies his troops for battle.

Despite the avalanche of experience, Notre Dame's biggest issues are at quarterback and running back. For the first time in a while, the quarterback situation is quite unsettled, with Dayne Crist and Tommy Rees battling it out for the honor to most likely be mediocre, though Kelly's shown himself to be a bit of a QB guru with the likes of Tony Pike and that other guy at Cincy. Look for either quarterback to have a decent day against the Wolverines, though either is just as likely to cough up a pick-six to Woolfolk. It's just how the match up goes, folks.

The receivers are a fairly talented bunch, especially with Michael Floyd being elgible to play (but we knew this would happen, so no sense complaining too much more). Floyd can carve up any secondary, especially Michigan's - a recovering Troy Woolfolk will have his hands full with this one. Ah well. At least Michigan doesn't have to deal with killer TE Kyle Rudolph, who was a total pain in the neck for a very shallow Michigan linebacking corps the last few years. Obi? Obi?

As for the backs, Armando Allen is finally able to cash his Social Security benefits, so he won't be joining the fray in this one. I for one am not sorry to see him go - even though dear Armando was streaky, he carved up Michigan pretty good in the last few years - maybe not on every play, but sometimes when it hurt. Replacing him is the capable Cierre Wood and a stable of other backs. Bet they wish they had Justice Hayes now. Oh, and their O-Line is the biggest question mark. Can they come together and play like a team, or will poor Dayne Crist get hurt again and the left side of the line fall apart again? I sure hope so.

The most important part of the Notre Dame 3-4 defense, entering its second year in the system under Kelly, is by far the D-line. And, I'm scared to say, they've got some really, really good talent on that line. Notre Dame went out and signed LOTS of high-caliber DEs and DT's, particularly two guys named Lynch and Tuitt, who seem better suited to a 60s detective show than mauling poor Big Ten linemen, but what are you going to do. Lynch has some speed, and Tuitt is a monster at 295 pounds who will either blow up like Vince Wilfork or blow up like Will Campbell. The latter please. Anyway, some of these guys will get looks at the next level, and returning starters like Ethan Johnson can also be lethal on the pass rush.

The 'backers for the Irish aren't bad either - Darius Fleming anchors the outside, though Michigan might be able to find some weaknesses here, as Fleming is a hard-nosed athlete with a nose for the game but let's be honest, he can't catch Denard. Only a few LBs in football have a shot at Denard after he gets through the first level, and Fleming ain't that guy. Manti Te'o, probably one of the best LBs in the country and worth every one of his five recruiting stars, returns to anchor the middle of the defense. Again, though, I'm more worried about them stuffing guys like Vinny Smith than Denard, because, well, you know, Manti, meet Taylor Lewan:

Like Michigan, Notre Dame's biggest weakness is its secondary, though they've certainly got the line play to make up for it. They've got a senior safety in Harrison Smith that brings plenty of experience, but really, this is about Denard being crisp with the ball and not forcing too many throws downfield. With seven picks, Smith is opportunistic, and winning the turnover margin will go a long way to winning this game.

Don't care. Notre Dame always has good kickers - Ohio State had Mike Nugent, so this theory universally holds true for all rivals. Allen is no longer returning kicks, but they've got lots of speed to burn in their wide receiving corps so someone will step up. Kick coverage is obviously key. Speaking of kicking, our kickers suck, and theirs are great. They probably have a punter as well.

Robinson versus Te'o - this'll be good all day, as Te'o is really, really smart, and, well, you saw that clip above.

Some authors from this blog choose to fraternize with Domers. I'm not one of them, though I met one once and she was really nice. If you run into trouble with them, I suggest running into direct sunlight. They just can't handle it. Especially not looking like this. Keep in mind this is an amateur sketch, so some slight inaccuracies might exist. 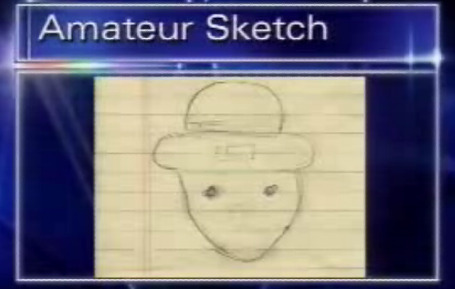 Also, I just can't stress enough how important this game is for recruiting. First national TV exposure of the season for Michigan (probably) and lots of recruits coming in for the night game. Beating Brian Kelly would be huge to keep Michigan talent where it belongs - not wearing green of any sort.

I had a big long section of this written up before I lost the post, but luckily, I'm nice and full of beer recommendations. I was going to pick a porter, because Founders makes THE BEST porter in the world (it's science!) because I wanted a dark beer for a night game. Instead, though, because it's more like a twilight game, I'm going with a sort-of dark beer. Try the Three Floyds Brewery Robert the Bruce Scottish Ale. 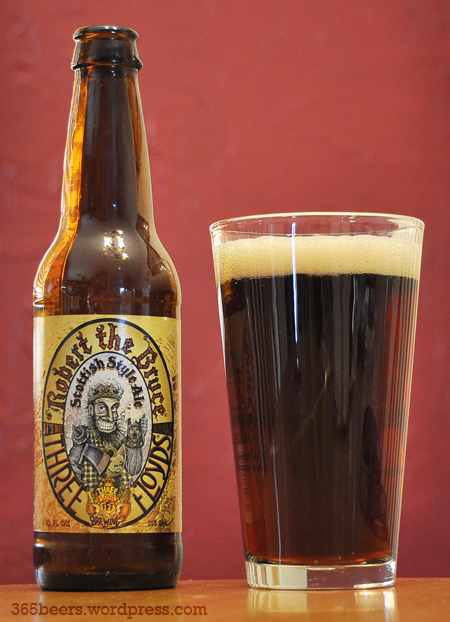 Obviously we can find many connections here. Three Floyds is in Indiana, and is the only good thing to come out of that state. Notre Dame is also in indiana. Notre Dame also has three Floyds, give or take two. As for the beer - It's crisp for a Scottish-style brew, but it finishes very smoothly. Not nearly as hoppy as last week's IPA, this sucker even has a distinct malty-parsley finish. I thought so, anyway. Enjoy the game, Michigan Faithful!