Share All sharing options for: Preview: Eastern Michigan vs. Michigan

Well THAT was fun, right?  After three quarters of abysmal output that saw the Irish just hammering the Wolverines under the lights, Denard went all like "wait, I'm Denard Robinson and you're Notre Dame: NOW I remember," put on his Irish Slaying Shoes (untied of course), and managed to construct a comeback made primarily of duct tape, dreams, and Jeremy Gallon streaking downfield somehow uncovered.  The result?  Ah hell, just watch it again:

Say what you will about Brent Musberger, his "I can't believe this!" call is pretty awesome.  I would have liked it better if he had said "THAT JUST HAPPENED" but that's a minor gripe.  I certainly hope the team hasn't spent all week basking in the glow of Irish tears like I have because they have an Eastern Michigan team paying them a visit this week who's 2-0 for the first time since 1989.  I haven't looked that up, that's just what Brady Hoke says, and right now that man could say the sun is evil, and I'd stay indoors until Hoke deemed it ok to once more return to the light.  Eastern is a great opportunity for Michigan to get out there and work out some of the kinks that saw the Irish put up 500+ yards of total offense and force the Michigan offense to multiple, frustrating 3 and out's and turnovers before Denard went Denard on them.

Vegas has Michigan as the 30 point favorites, which like, yeah that's probably about right.

When Eastern Michigan Has The Ball

Our friends over at Eagle Totem, an Eastern Michigan blog, described the passing game thusly:

Ok then.  Let's start with the running game, shall we?  Eastern Michigan splits carries with their two backs, Dominique Sherrer (JR) and Javonti Greene (SO).  Both are described as quick and able to make a cut, but probably not guys who are going to move the pile.  Quarterback Alex Gillett will also take off if he doesn't see anything available.  Eastern Michigan is currently...wait...fifth in the nation (?!?) in total rushing yards averaging 333 yards per game.  Of course, I'm not sure how useful that really is given that their two opponents have both been FCS schools, but Alabama State, who they beat 14-7, is one of the tougher FCS opponents out there.  The bottom line is that Eastern is going to run the ball, and they've had some pretty good success in doing so this season.  It must be because Mike Hart is coaching them. 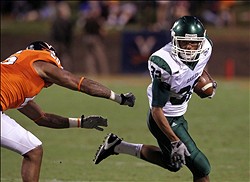 Trying to stop them will be a Michigan defense that allowed 198 yards rushing at 6.0 yards per carry against Notre Dame.  Against Eastern, I'll be watching for a couple things: Brandin Hawthorne's sticking power at linebacker, and William Campbell's ability at defensive tackle.  Both players came off the bench against Notre Dame and made some plays when the defense needed them the most.  Hawthorne's signature play came when he knifed into the backfield for a TFL on a crucial 3rd down.  Campbell, and I can't believe I'm saying this, generally just wrecked shit when he was in, tossing Notre Dame linemen around, getting held, and overall having a...pretty...solid...outing...If Campbell becomes the one man wrecking crew he was supposed to be as all-everything 5-star recruit, he will become my new favorite player.  This is your reward, Big Will.  The adulation of one blogger.  I will write posts dedicated to you.  Hell, if you're awesome the rest of the year, I will write 1 post a week referencing your beastliness on the football field, compassion and caring off the field, your ability to woo the fine ladies of Ann Arbor - it's all yours.

Well then, erm, getting back to Eastern Michigan, they do have a passing game, and it is not so good.  Like, 117th in the nation not so good.  When you're way down there in any particular catagory, and you've only played FCS schools, you've got a problem.  The man to turn that around is the aforementioned Alex Gillett, who I am hoping will be spending most of his Saturday on his back having felt the loving caress of Jordan Kovacs facemask implanted in his sternum.  He will be getting some help though, as Kinsman Thomas returns from a 2-game suspension.  Thomas was his #1 receiver last year, racking up 4TD's, 473 total yards, and 18 yards per catch in 2010.  Even with the addition of Thomas, I think the Eastern passing game is going to struggle.  Their offensive line, which was dicey to begin with then became moreso with the loss of Guard Korey Neal, will have their hands full with a Michigan defensive line that is eager to prove themselves.  Craig Roh, invisible these past 2 games, will hopefully start to make an impact, as he's threatened (if not already passed) by Jibreel Black.

When Michigan Has The Ball

"Some of that (offensive consistency) will come from running more under center," he said after practice Tuesday. "We're still so much more shotgun than we are under center, and as long as you're under the gun, your tailbacks aren't going to be featured as much."

Regardless of whether I believe this is a good idea (I've made it abundantly clear that I prefer the shotgun with this offense) this appears to be the direction we're headed.  As long as we keep winning games I don't really think it matters.  The running game, no matter what, depends on the offensive line who frankly hasn't been very good this year at the point of attack.  Your thoughts, Mr. Lewan:

"I’m pissed – what do you want me to say?" Lewan said Tuesday. "That’s awful … you need to run the ball and that’s a direct correlation on us."

Fitzgerald Toussaint returns this week after missing ND with a shoulder injury, which should help matters, but it all starts up front.  The offensive line, with newly minted starter Ricky Barnum, will have to be better at the point of attack to get the running game going.  With the emphasis off Denard running the ball, I expect to see a lot of handoffs against Eastern to get some reps for the line and the running backs.  To be fair, they did seem to start to open some gaping holes against Western before that game was called, but against ND?  Michigan tailbacks had 10 yards on 9 carries.  That's not so good. 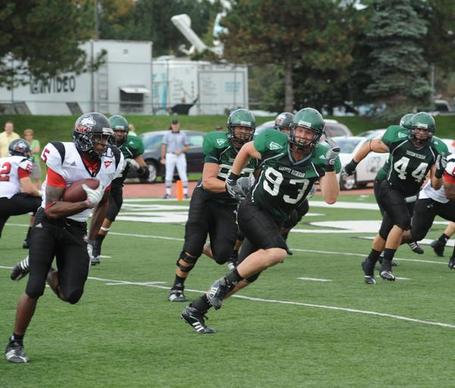 Defensive playmakers for Eastern Michigan include Brad Ohrman, a senior defensive end, and Marcus English, a junior weakside backer, and Justin Cudsworth, a sophomore corner.  Of the three, only Ohrman is a home grown guy, with English transferring from JUCO and Cudsworth transferring from UCLA.  While these are the three to watch, I do not expect the Michigan line to have much trouble opening lanes for the combination of Toussaint, Shaw, and Smith.

In addition to getting a better rhythm on the ground, I'll be looking to see if Denard has really figured it out at game speed, or if the 4th quarter last week was a mirage.  As great as some of those back-shoulder fade throws were, he also made some terrible decisions, including the endzone pick, and the "chuck it to Hemingway in double coverage" that ended up being caught, but yeah, let's not do that again.  I'd like to see more accuracy, and a little more "design" to the passing game.  There were a few throws, including the FB rumble and the zip to the uncovered Gallon, that were dead-on, and I'd like to see more of those from Denard.

...remains a disaster, although Gallon had a nice return against the Irish.  What bothers me is our kick coverage, which seems to have not improved through numerous coaching iterations.  I do not have the knowledge to say what is going wrong, excepting to say that teams, in general, can figure out special team coverages.  Why Michigan can't is a mystery.

The kicking game hasn't gone too poorly as Matt Wile has stepped in admirably for the suspended Will Hagerup.  The great field goal adventure of 2011 in not yet upon us as we've yet to kick a field goal.

Michigan wins this going away 35-10.  Michigan has more rushing attempts that any other game in the season, Toussaint goes for over 100, the passing game opens up, Michigan is under center 50% of the plays.

Will Campbell vs. Crushing Weight of Expectations: If Big Will comes out, plays the majority of the game, and makes a positive impact, the specter of having to write sonnets in his honor materializes.

The Offensive Line vs. Crushing People: Taylor Lewan is PISSED.  The offensive line as a whole needs to open up some running lanes, and work out the kinks before Big Ten play starts. 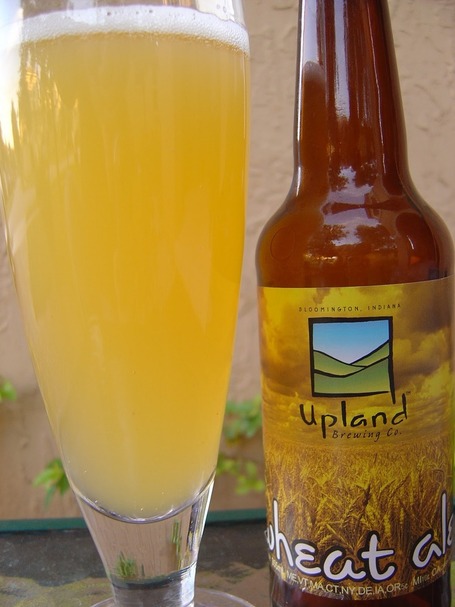 This local-to-Indiana brew is a great way to say goodbye to summer.  I'm not usually a wheat beer guy, but this stuff goes down pretty well, and doesn't have that "am I drinking a jolly-rancher?" kind of flavor that makes you sick 1.5 beers in.

Other noon kicks include Auburn/Clemson, which I wouldn't begrudge you from having on the channel return.

The key to throwing inanimate objects is your object selection.  You have to first have the object that may be thrown close by, and - THIS IS IMPORTANT - remove any objects from the general vicinity that you don't want thrown.  My go-to is usually my hat.  It's unbreakable, gets good whip on it, and probably not going to damage anything too greatly.  Just mind the blinds, and any household pets.  The threat level, for this game, is green.

We'll welcome Mike Hart back to the Big House this weekend.  We're gonna need a montage: