Share All sharing options for: Michigan Steals a Win, Averts Upset to Northwestern

So far this season, everything has pretty much followed the script. Michigan has comfortably beaten the teams that they're better than, and they've lost to the teams that are better than them (for the most part -- I'm not sure that Virginia is much better than we are. It was a road game though. I don't know, I digress). That almost wasn't the case on Wednesday as Michigan narrowly avoided a bad home loss to the 11-5 (1-3) Northwestern Wildcats. Thankfully Michigan was able to overcome their worst shooting performance of the year and a double-digit second half deficit to send the game into overtime for a very close win. To be honest, I'm not really sure why Michigan shot so poorly and credit should be given to Northwestern for executing a stellar gampelan (putting Shurna at the five and hedging really hard on screens was excellent coaching), but this game should not have been this close. At least this didn't go down as a home loss that would have effectively knocked Michigan out of the Big Ten's top tier.

Northwestern ran out to an early 8-0 lead but Tim Hardaway Jr kept Michigan in the game with 11 quick points and hit a three to take a 15-13 lead almost midway through the first half. Cold shooting through the rest of the first half enabled Northwestern to take a seven point halftime lead as Hardaway was basically alone in his efforts with 14 of Michigan's 27 first half points. In retrospect, a seven point halftime deficit wasn't really that bad; Michigan did not have a gameplan for the lanky John Shurna at the five spot (as their usual center, Luka Mirkovic, is not much of an offensive threat) and Zack Novak only played a couple minutes due to foul trouble. Not much had changed until Michigan called a timeout with 13:36 left in the game after Northwestern hit a shot to stretch their lead to 44-36. Michigan came out of that timeout, went on an 10-0 run that was interrupted by three NU timeouts to take the suddenly raucous crowd out of the game and took its first lead of the game. Northwestern rallied from there and Tim Hardaway had to hit a key three to tie it with two minutes left and both teams were held scoreless in regulation from there to send the game to OT tied 54-54. It came down to free throws in overtime; Michigan scored eight of their twelve points in overtime and Alex Marcotullio bricked the first of his three free throws (doubtlessly due to my frantic arm waving behind the basket) after being fouled down three with 0.3 seconds left in OT. 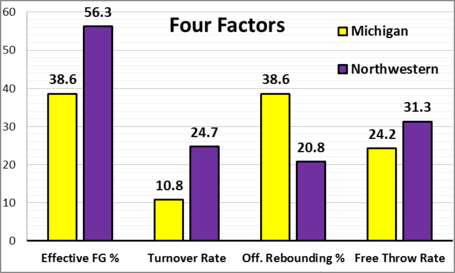 This was easily Michigan's worst shooting output on the year (22-66 from the field, 7-30 from three), but they still inexplicably won. The biggest and most equally surprising stat was Michigan's significant advantage on the boards. Michigan generated 14 extra possessions because of offensive rebounds, Northwestern was only able to get three. This difference was huge -- Michigan's starters, Trey Burke, Novak, Hardaway, Evan Smotrycz and Jordan Morgan -- combined for those boards collectively and the Wolverines absolutely dominated Northwestern physically inside. Add in Michigan's stellar free throw shooting -- the team went 15-16 and Trey Burke made 8-8 (despite having a very inefficient night) -- and UM somehow overcame that poor shooting and came away with a win. Outside of Tim Hardaway, Michigan couldn't buy a basket (Stu Douglass was 3-10 from the field, Burke was 5-17, and the rest of the team was 2-21 from three), but thankfully it didn't matter.

I don't want to exaggerate, but this loss would have been really bad for Michigan. It's safe to say that the Wolverines are in the Tournament solidly at this point. Still, Michigan needed to win this one and needs to win at Iowa tomorrow before a particularly brutal stretch that starts with Michigan State heading into Ann Arbor on Tuesday. It wasn't pretty, not even close, but Michigan still persevered and came away with a critical win in front of an atypically loud crowd in the Crisler Center. We knew that this was a game that Michigan needed, and thankfully they got it.