Who is the Best Point Guard in the Big Ten?

Share All sharing options for: Who is the Best Point Guard in the Big Ten?

The biggest question for Michigan's basketball program entering the season was at the point guard position. Darius Morris came out of nowhere a year ago to become one of the better point guards in the country and took his unparalleled size and passing ability to the NBA after the season finished. He was the only Wolverine from last year's surprising NCAA Tournament team to leave the program (as there weren't any seniors and he was the only early entrant to the NBA). Before his unanticipated departure, Morris was the star player for Michigan and he and the rest of the team collectively looked like a top ten unit entering this year. After he left, Michigan fell in the preseason projections and everyone wondered who could replace Morris's production.

Trey Burke was quickly singled out as the heir apparent to Morris; the three-star, true freshman point guard from Columbus was the only pure point guard on the roster. Seemingly every preseason preview of Michigan had this statement as the biggest question for the Wolverines: "Can Trey Burke fill in for Darius Morris without too much of a dropoff?" Burke, known more for being Jared Sullinger's high school teammate than for his actual playing prowess, had an illustrious high school career; he only lost a handful of games in his high school career, won an AAU championship at one point, and was Mr. Basketball as a senior. There was actually a little hype from the assorted national media types who saw Michigan's practice as the season approached, but not enough to allay concerns of how well he'd transition to college basketball.

The Big Ten looked to have a very strong point guard class and so far it has. Jordan Taylor was a consensus preseason All-American after a tempo-free dream season, but has regressed to the mean a bit and is no longer the ruthlessly efficient player he was a year ago. Despite hearing about how he's the best defender of all time in every broadcast, Aaron Craft is actually very good and incredibly annoying to face on that side of the court (in a Chris Kramer type of way). Tim Frazier and Keith Appling have stepped in admirably for two elite players, Talor Battle and Kalin Lucas respectively, and Frazier in particular has produced at an outstanding level. Flying under the radar are guys like Roy Devyn Marble, Lewis Jackson and Dave Sobolewski who are very good role players on Iowa, Purdue, and Northwestern. LSU transfer Bo Spencer is an unknown commodity for the most part, but he's easily the best player for the Nebraska Huskers. From top to bottom, there are a lot of excellent point guards in the Big Ten.

Then there's Trey Burke, the precocious scorer who's almost the polar opposite of Darius Morris. Morris was a bigger guard who bullied smaller defenders to get to the rim and whose elite passing ability made his teammates much better. Burke isn't as big as Morris and isn't the passer that he was, but Trey can shoot the ball far better than Darius ever could and isn't too bad at scoring in the paint either. We can reasonably say that Trey has at least filled the void left by Morris and it's not a stretch to think that Burke could actually be a better player than Morris was last year. Trey's been named the Big Ten Freshman of the Week three times so far this year (over Cody Zeller, the savior of Indiana basketball) and was once named Big Ten Co-Player of the Week. He's scored in double figures in all but two games and saved his most statistically impressive performances for when Michigan needed it the most: 17 points and 9 assists against Duke in Maui, 27 points in a narrow home win against Minnesota, and 19 points, 7 rebounds, and 7 assists to escape Northwestern. In one of his worst performances of the year, he almost notched a triple-double with 10 points, 8 assists and 7 rebounds against Indiana. Trey has allayed concerns over Michigan's point guard spot and he's played so well that I'm asking if he's the best point guard in the Big Ten.

Here's a brief statistical comparison with the rest of the Big Ten's point guards: 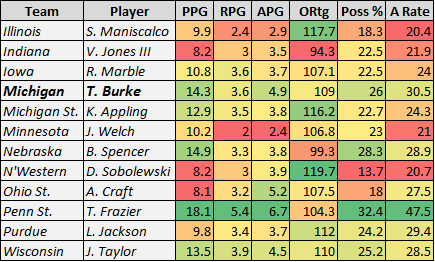 Analysis after the jump...

To make this simple, I'll let someone else whittle the list down to a few candidates for me. The Bob Cousy Award is given to the best point guard in the country and they've already released their list of finalists. There are three Big Ten players on the list: Trey Burke, Aaron Craft and Jordan Taylor. Leaving Tim Frazier out of that top group is a bit unfair; indeed, he has put up the best numbers of anyone. Being the best player on a bad team definitely helps him out in that regard. No, Tim Frazier is a very good player but I don't think that he can be considered elite -- he scores a lot of points, dishes out a lot of assists, and grabs a lot of rebounds because he has to. He's not efficient, so his high volume of possessions make his numbers look better than they actually are.
I've already put up the numbers, so now I'll ask you guys who you think is the best. Is it Jordan Taylor, the superstar who has regressed a bit after a few key teammates graduated? Is it Aaron Craft, the elite, lockdown defender without the offensive production of some other guys? Is it Trey Burke, the freshman point guard who is ably stepping in for Michigan's departed leader? For my money, I'll still take Taylor: he was awesome enough last year for me to excuse his less-than-awesome performance this year, but I'm curious to see what everyone thinks. (For the record, I'd take Burke second, Craft third, Frazier fourth and Appling, who's out of position, fifth if I were ranking the Big Ten point guards.)