Share All sharing options for: Arkansas Starts Fast and Holds Off Michigan

Michigan followed up a thrilling home win over Michigan State with a trip out to SEC country for an unusual non-conference game in the midst of Big Ten play. Arkansas provided a unique challenge for the Wolverines with their up-tempo style and Michigan did not respond well. The Razorbacks ran out to a 29-10 lead before missing a shot from the field or from the free throw line (11-11 from the field and 3-3 from the line). It was a nightmare scenario for Michigan to start the game: the Wolverines were cold shooting the ball, a couple of quick turnovers forced by the Arkansas press led to easy buckets on the other end, and the Razorbacks literally could not miss. The sellout crowd was extremely loud and contributed to the lack of poise and composure from Michigan and the frenetic play on the court. Michigan was eventually able to control the tempo a bit and cut a 20 point deficit to 13 to enter halftime but Arkansas still scored an absurd 46 points in the first half (1.45 points per possession!). The second half went much better for the Wolverines, particularly on the defensive end. Arkansas was held to only 20 points (.68 points per possession) in the second half, but Michigan wasn't able to capitalize and still fell short on a missed three point attempt at the buzzer by Trey Burke.

I hate using cliches like "it was a tale of two halves" but the differences between the first half and the second half was striking. 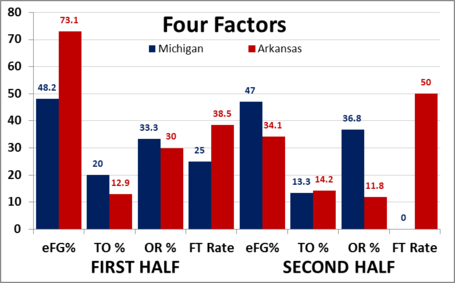 Yikes. If Arkansas would have actually missed some shots early on, Michigan would have probably won pretty easily. That's why this game is so disappointing: Michigan played as badly as it could have played for about ten minutes and still almost won the game.

Trey Burke had a very inefficient day (13 points on 19 field goal attempts), looked out of sorts to start the game against the ball pressure from Arkansas, and still almost won the game with a shot that couldn't have been closer to going in. He finished with 13 points, 7 rebounds, and 6 assists and it looks like he's our best player. Zack Novak had the best game of any Wolverine -- 17 points on 6-9 shooting (5-7 on threes) was pretty good, and the very hard foul (to put it nicely) on B.J. Young made the whole state of Arkansas hate him -- but a few early, very frustrating turnovers led to easy layups. I mentioned that Jordan Morgan had a big impact in the second half and it was nice to see him have a good offensive day. Hopefully Burke looks to drop the ball off for more Morgan dunks when the defense collapses and hopefully Morgan gets rewarded more often for running the court so well. Stu Douglass, Evan Smotrycz, and Tim Hardaway Jr all shot poorly from the field (5-20) and all need to improve. Douglass needs to do better than 1-8 from three, Smotrycz is in a bizarre funk and seems to have lost all confidence, and Hardaway needs to stop shooting threes unless they're wide open and in rhythm. Those guys are key and Michigan can't afford these performances from them. Blake McLimans and Matt Vogrich played a little but didn't make an impact.

In the grand scheme of things, this loss doesn't really matter too much. Arkansas isn't a great team, but this loss -- on the road, in a hostile environment, during Big Ten season -- won't look that bad down the line during the seeding process. It doesn't count for the Big Ten standings obviously, and Michigan is still tied in first place after this weekend. The away game at Purdue on Tuesday looms large; winning that one would enable Michigan to keep pace with Ohio State and Michigan State and will help assuage fears of how poorly Michigan has done on the road so far this year. This loss hurts because of how it went down -- the absolute blitzkrieg by Arkansas followed by a dogged comeback and a last second miss -- but it probably won't matter too much in the long run.