This was a painful loss. There's really no other way to put it; this game was incredibly frustrating and the outcome stung. It wasn't frustrating like the Virginia loss was -- just being straight-up beaten by a better team -- and it was a much different feeling than watching Michigan get run out of the gym (like they did last year in Bloomington), no, it was the inescapable feeling that this game was so close but just out of reach. A better shot selection here, one less lapse on the defensive end there, whatever, and Michigan wins this game. I'm not worrying about what could have been if Michigan had won, but the feeling that they could have had such a huge win is still there. Michigan didn't play particularly well, Tim Hardaway Jr and Trey Burke struggled on offense and everybody struggled to guard Christian Watford, the Wolverines played in one of the tougher road environments in the conference, the other team shot the lights out, and Michigan still was in great position to win at the end. That's perhaps the most frustrating thing -- Michigan was almost good enough to overcome all of that and almost beat a damn good Indiana team.

It looked like it could have been another blowout when Indiana raced out to an early 17-6 lead before the second TV timeout, and Indiana eventually stretched the lead to 15 with five minutes left in the half. Michigan responded with a 12-2 run sparked by Blake McLimans (who interestingly played some with Jordan Morgan still on the court; it's rare that Beilein puts two fives on the court at the same time, but I guess Blake stretches the floor well with his shooting ability) and Stu Douglass to cut the lead to single digits and keep the game within striking range heading into halftime. Michigan closed the gap to tie the game at 46 with a big Evan Smotrycz three a few minutes into the second half, but Indiana pulled away and put their lead back to double digits on a thunderous Victor Oladipo dunk with seven minutes left. Fortunately Hardaway responded with his own huge dunk and and-one over Oladipo to give the team some momentum and key a 13-3 run capped by another Hardaway dunk (this time on a breakaway) to tie the game 68-68 with three minutes left in the game. Several poor shots by the Wolverines doomed Michigan down the stretch and Verdell Jones's key jumper to make it a two score game followed by a Zack Novak turnover effectively ended the game. 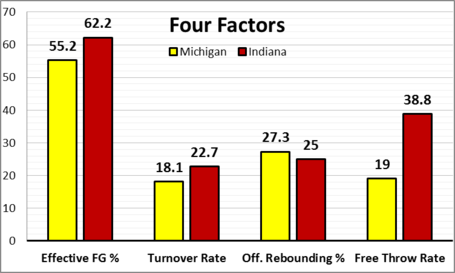 I'm kind of surprised that Michigan kept this one so close, especially with the way that Indiana was shooting. The Hoosiers are typically very good at holding onto the ball and forcing the opponent into turnovers, but Michigan had a significantly better turnover rate than IU did (12 turnovers to Indiana's 15 on several more possessions). Also surprising was Michigan's slightly better rebounding -- the Wolverines are good at keeping opponents off of the boards but typically don't crash the glass well. Trey Burke was actually Michigan's top offensive rebounder (which would make you think that Michigan lucked out on long rebounds, even though some were tipped to him). Unfortunately Indiana shot the lights out with 55% from the field and 63% from behind the arc; the Hoosiers' hot shooting was the difference. Indiana got to the line a lot more than Michigan too, but they only made 12 of 19 free throw attempts.

It's easy to point out Hardaway and Burke's collective 11-34 shooting from the field and say that's the reason Michigan lost. They didn't always take the best shots and were both very cold from the field for the most part -- Hardaway only made two field goals that weren't dunks or layups -- but despite their inefficiency, they still kept Michigan in the game and wound up with fine stat lines (19 points for Hardaway and 10 points, 8 assists and 7 rebounds for Burke). Michigan actually had a very good day offensively and fared better than Kentucky and Ohio State did on that end of the court in Assembly Hall. No, it was Michigan's defense that struggled, largely because of Indiana's shooting, and the play of Christian Watford and Cody Zeller. Indiana is the second-best three point shooting team in the country and they failed to disappoint. Short of Victor Oladipo, Indiana shot 7 of 8 from behind the arc. Most of the shots were wide open, in rhythm, and taken by great three point shooters. Michigan's field goal defense has been shoddy against teams that shot well, and Indiana exploited it to perfection. Watford was nearly unstoppable with 25 points and only three missed shots, and Zeller had 18 with only two missed shots. Between those two and Indiana's shooting, Michigan's defense (which hasn't been that great this year) was overwhelmed.

In all honesty, I thought Michigan would have a tough time keeping up with Indiana. It's frustrating that we couldn't string together a few more buckets late and steal one from a top tier Big Ten team, but more than holding your own on the road against one of the better teams in the conference is an indisputably positive sign. Sure there are things to work on, but Michigan proved that it's a really solid team and is continuing to get better. Sooner or later the Wolverines will get a win that makes the rest of the country turn their heads. There's another big game on Sunday against the Wisconsin Badgers here in Ann Arbor. Of course we'll see plenty more chances with another game against IU and two each against Ohio State and Michigan State, but for now, Michigan is this close to making a breakthrough and getting a marquee win.