On Sunday afternoon, the #13 Michigan Wolverines took on the #19 Wisconsin Badgers in front of a sellout* crowd at the Crisler Center on CBS. Both teams had been coming off of tough losses -- Michigan had dropped a two point contest to Indiana in Bloomington and Wisconsin followed up an embarrassing home loss to Iowa with a double OT heartbreaker to Michigan State in Madison -- so this nationally televised game held major implications for both sides. Fortunately it was the Wolverines who dominated the Badgers for once, winning their first game against Wisconsin in eleven tries. Bo Ryan has had John Beilein's number for the entirety of his tenure at Michigan (Wisconsin is the only Big Ten team that Michigan hadn't beaten under Beilein), but that definitely was not the case on Sunday.

Wisconsin is reeling, and don't get me wrong, they played terribly, but this was a phenomenal performance for Michigan. The Badgers weathered a 10-2 Michigan run to open the game to draw within six at halftime (interestingly, Wisconsin's run coincided with the first half absence of Jordan Morgan with foul trouble, they were able to take advantage of Evan Smotrycz and Blake McLimans down low). However, Michigan used another run, this time 7-0, to open the second half and didn't allow Wisconsin to cut the game to single digits for the rest of the game. It's hard to single out any one performance as a cut above the rest. Tim Hardaway Jr played much, much better than he did against Indiana with 17 points on ten shots along with 10 rebounds (he also made two threes!!!). Trey Burke had 14 points and actually outplayed consensus preseason All-American Jordan Taylor on the offensive end -- his defense on Taylor was particularly superb as well. Jordan Morgan only had four points, but he had 11 rebounds (5 offensive) in only 19 minutes and erased Jared Berggren on the defensive end. Zack Novak didn't make a three but did just about everything else, scoring 12 points and getting two offensive boards along with a key steal. I don't really like the plus/minus stat, but Michigan was +32 when he was on the court and -14 when he was off of it, which is just insane. Stu Douglass made a key three pointer, and was a stellar perimeter defender as he forced five turnovers (and didn't miss a shot or turn it over himself). Evan Smotrycz and Matt Vogrich were quiet, and Blake McLimans is a more serviceable replacement for Morgan. 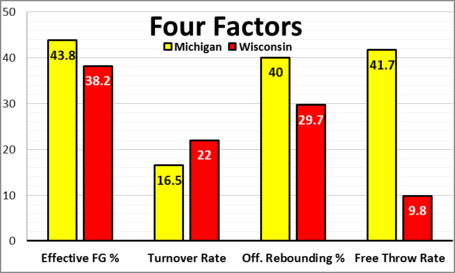 Michigan beat Wisconsin in each and every facet of this game. The Wolverines held Wisconsin to barely over 30% from the field and outshot the Badgers despite only shooting 26.7% from three (4-15). Somehow Michigan had fewer turnovers than Wisconsin did; holding onto the ball better than the team with the lowest turnover rate in the country is downright impressive. Michigan only had one more offensive rebound than Wisconsin did, but since Wisconsin was chucking up so many bricks that Michigan rebounded a much better percentage of their shots than Wisconsin did. Michigan hasn't really gotten to the free throw line very often, but they went 17-20 from the line against the Badgers. Michigan's offensive and defensive efficiencies were the best performances of any Wisconsin opponents this year. An 18 point margin in a 54 possession game is terrific.

Moving forward, this is a great win for Michigan. The Wolverines didn't fall in the polls and righted the ship after a tough loss to Indiana. Northwestern and Iowa shouldn't provide much resistance (although both are dangerous), so Michigan should see MSU on Tuesday the 17th in Ann Arbor in a matchup of top ten teams. In the long run, this is a quality win that will look good when Michigan is seeded come March -- Wisconsin should right the ship, and while they aren't as good as they have been, they're still a tough team.

*the student section has been given five sections in the upper bowl (curse you Dave Brandon), and one of them wasn't filled.