The commitments continue to work through their regular seasons while the coaches went out to scout the upcoming 2014 class.

Share All sharing options for: Monday Recruiting Roundup Has Some Free Time

Commitments and Prospects Continue Their Journey

Players that are sticking out:

CB Channing Stribling - He now has 5 interceptions through only 6 games. He has also scored in every way imaginable, bringing back interceptions, returning kicks and catching passes. Stribling is no longer a sleeper.

OL David Dawson - Everyone that watches him comes away impressed, and although he isn't going to produce statistics it's easy to tell that he's a force. MGoBlog was impressed by his performance against OLSM:

Dawson has reached the point where I almost assume that he'll dominate. While the Cass Tech line as a whole struggled, Dawson was a bright spot, getting huge push in the run game and holding up well on the edge in pass protection. His mean streak was once again on full display as he consistently played to-and through-the whistle, and it was obvious that OLSM defenders were frustrated going up against him.

I'd recommend reading the entire piece, as it has interesting bits on a few Michigan prospects and commitments.

RB Derrick Green - He's still a beast carrying the ball but the block at 1:38 of this video shows that he can be one hell of a blocker:

According to the Tom VH and Tremendous players the coaches scouted or visited during the off week includes but isn't limited to:

2014 S Montae Nicholson - You should already know this rangy DB's name.
2014 TE Nic Weishar - Extremely talented tight end who will receive heavy attention.
2014 WR Derek Kief - A tall, rangy receiver that needs to get stronger before he'll be ready at the next level.
2014 DE Garrett Dickerson - Already rated highly by 247. Michigan is going to face the nation's best teams for his services should they decide to stay in the race, and it looks like they will.

One of the few names left on Michigan's 2013 radar is DB Leon McQuay. His recruitment is still a bit of a mystery but his father continues to mention Michigan as an option, and Leon is now set to visit Ann Arbor for the Northwestern contest. Things will get interesting down the stretch here.

2013 cornerback commitment Gareon Conley had been rumored to be wavering but that appears to be all settled. He's fully expected to sign with Michigan.

All but five of Michigan's 2014 offers are within the ESPN watchlist: es.pn/PaqdUH

I don't trust ESPN's scouting as much as Rivals or Scout but that's still a good sign. Most of the players on the ESPN watch list will end up in the top 300 of all the major services.

Two of the players on that list are DB Quin Blanding and DE Andrew Brown. Both players come from the state of Virginia and will be hard to persuade considering Michigan's tardiness to the party. Both are elite names to remember.

Michigan is still holding its offers for 2014 QBs despite the positions being a high priority. One of the many signal callers on Michigan's board is Shelby Spence, who will visit for either the Iowa or Northwestern game. Drew Doxtator and Tyler Wiegers are also names to keep an eye on. 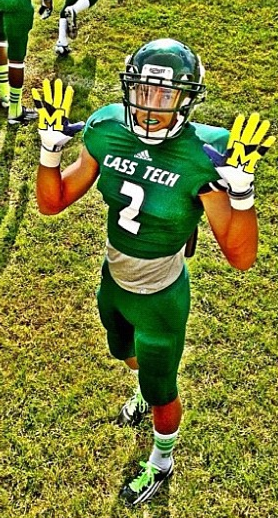 The Cass Tech pipeline will most likely remain intact.