Monday Recruiting Roundup updates you on the latest recruiting rumblings, including updates on Derrick Green, Laquon Treadwell and more.

Share All sharing options for: Monday Recruiting Roundup Has Talent

The Dawson Saga Rages On

David Dawson recently decommitted from Michigan, visiting Florida not too long after. Many expected him to give his verbal to the Gators during the trip south, but the word never came. He now believes that staying close to home is important, which... umm.... you were just committed to Michigan? Dawson hated the Michigan staff's attempt to keep him from visiting other schools, and his new top two consists of Ohio State and Michigan State. You can't make this stuff up, people.

Now this isn't a reason to go on Twitter and tear him apart. His decision may have been detrimental to Michigan but the kid's just doing what he sees as best for himself, so let him be.

Mike Farrell spoke on the recruitment of Derrick Green in his latest piece on Rivals:

Speaking of Green, the thought that he would end up in Oregon adds to the ridiculousness of the above story with Tyner.

Green has listed the Ducks as one of his finalists and liked his trip to the state when he was at The Opening, but Oregon has always been a long shot in my opinion, even for an official visit.

It's unclear if Oregon will back off as part of getting Tyner back in the fold or not, but it shouldn't matter -- Green isn't going there. I know I've said it before, but I'll say it again -- Green appears to be the perfect fit as a Big Ten running back and with his other two favorites, Auburn and Tennessee, having coaches on very hot seats, Michigan has to be the final destination, right? It makes sense, but as we know, sometimes recruiting makes no sense.

It's impossible to get a true read on Green lately, as he's shying away from any and all reporters. It's hard to see Oregon being a real player in Derrick's recruitment, but don't be surprised to see him fly out just to get the Nike treatment for another weekend. I would too.

Green is still killing it on the field, btw:

Laquon Treadwell Always Gets His Own Section

Mike Farrell also spoke about the recruitment of Laquon Treadwell in the piece that was linked above. What he said:

The only thing more impressive that wide receiver LaQuon Treadwell's ability on the field (and he has been playing like a five-star this season) is his consistency when it comes to not taking visits. Treadwell has now set up visits with Missouri, Ole Miss, Michigan and Oklahoma this month alone and won't make any of them.

The passing of his uncle this past weekend kept him from a big visit weekend in Ann Arbor, but I still think the Wolverines are his future home until he actually takes one of the two trips he wants to take to OU and Oklahoma State.

It's easy to see why he wasn't in Ann Arbor that weekend. He recently tweeted that all visits were on hold until his season is over, and his team expects to go deep into Illinois' playoff bracket. Don't expect to hear anything worthwhile until he visits.

Dominant 2014 SDE Malik McDowell was uncoordinated at one point in his life:

Now the Detroit (Mich.) Loyola junior defensive lineman is one of the top football recruits in the country, but before he was taking out ball carriers and offensive linemen, he was doing damage to tables, chairs and stair railings

"He was a little clumsy, off balance," Greg said. "As a young kid he didn't have his coordination.

"He'd knock a lot of stuff over. When he started playing basketball, he had to find that balance and learn that you couldn't run into kids. I had to tell him this is not football and you can't just throw your body into people like that."

As a freshman the 6-foot-7, 290-pound McDowell began to find his balance. He won defensive MVP at the Toledo camp heading into his sophomore year.

That's not the case anymore. I really want McDowell to be part of Michigan's 2014 class, mostly because Michigan hasn't picked up a lineman with his ability in a very long time.

Michigan is still recruiting Leon McQuay III, who was recently the subject of another AmFam video:

McQuay really is a special football player, possessing the rare ability to play corner and safety at an elite level. He'll visit Michigan during their contest against Northwestern.

We already knew that 2013 Michigan verbal Dymonte Thomas would be in the Army All-American game, but here it is from the horse's mouth:

Congratulations to a very talented athlete.

Finally, an update on the Michael Ferns winged helmet recreation: 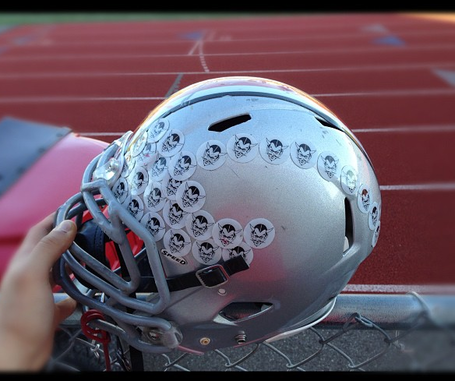